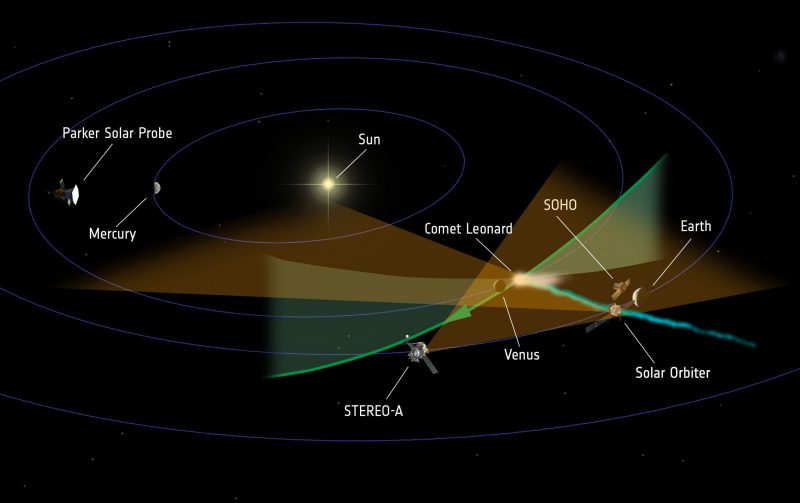 The best comet of 2021 was C/2021 A1 Leonard. Many in the EarthSky community captured its photo (see photos here). And this week (January 25, 2022), the European Space Agency said that its Solar Orbiter – which is on a mission to study the sun – quite by accident passed through this comet’s tail in late 2021. ESA said in a statement:

For several days centered on … December 17, 2021, the spacecraft found itself flying through the tail of Comet Leonard.

Solar Orbiter had just swung past Earth for a gravity assist – on its way toward a close approach to the sun in March this year – when it found itself within the comet’s tail. Scientists took advantage of the opportunity to capture information about the particles and magnetic fields present in the comet’s tail. ESA said:

This will allow astronomers to study the way the comet interacts with the solar wind, a variable wind of particles and magnetic field that emanate from the sun and sweep through the solar system.

Launched in 2020, Solar Orbiter is on a mission to capture the closest images ever taken of our sun. Its goal is to help scientists understand the sun’s 11-year sunspot cycle. The most recent cycle – Solar Cycle 25 – officially began in late 2020, so that the sun over this past year has been undergoing a noticeable upswing in activity (producing, for example, more sunspots).

I ran it with Comet Leonard and Solar Orbiter with a few guesses for the speed of the solar wind. And that’s when I saw that even for quite a wide range of solar wind speeds it seemed like there would be a crossing. … The big advantage is that for basically no effort on the spacecraft’s part, you get to sample a comet at a massive distance. That’s pretty exciting.

While within the tail, one of the sensors board Solar Orbiter measured particles that were definitively from the comet and not the solar wind. It detected ions of oxygen, carbon, molecular nitrogen, and molecules of carbon monoxide, carbon dioxide and possibly water. Stefano Livi of the Southwest Research Institute said:

Because of their small charge, these ions are all clearly of cometary origin.

One of Solar Orbiter’s findings was that the comet carries the sun’s magnetic field draped around it. Lorenzo Matteini of Imperial College said:

We are in the process of investigating some smaller scale magnetic perturbations seen in our data and combining them with measurements from Solar Orbiter’s particle sensors to understand their possible cometary origin.

Solar Orbiter’s instrumentation simultaneously captured the comet’s head in both visible and ultraviolet light on December 15 and 16, 2021. These images are now being analyzed by the instrument team. Alain Corso of the CNR-Institute for Photonics and Nanotechnologies in Italy, said:

The visible light images can hint at the rate at which the comet is ejecting dust, while the ultraviolet images can give the water production rate.

Another imager on Solar Orbiter captured parts of the comet’s ion tail as the spacecraft passed through. In the video, you can watch changes in the tail in response to variations in the solar wind speed and direction.

A different mission studying the sun, the Parker Solar Probe, kept an eye on Comet Leonard from further away. In the image below, you can watch Comet Leonard pass between Earth and Venus from Parker’s view of our inner solar system near the sun.

Here’s another view of Comet Leonard from STEREO-A, a different solar probe.

Not the first tail crossing

This isn’t the first time Solar Orbiter has crossed through the tail of a comet. Shortly after its launch in 2020, Solar Orbiter crossed the fragmented tail of comet C/2019 Y4 ATLAS. Daniel Müller, a project scientist for Solar Orbiter, said:

This kind of additional science is always an exciting part of a space mission. When the comet ATLAS crossing was predicted, we were still calibrating the spacecraft and its instruments. Also, the comet fragmented just before we got there. But with Comet Leonard we were totally ready … and the comet didn’t fall apart.

Other human-made space probes have crossed through comet tails in the past. But, generally speaking, scientists have only realized it after the crossings occurred. The Ulysses mission, yet another solar probe, met more than one cometary ion tail. It encountered comets C/1996 B2 Hyakutake in May 1996 and C/2006 P1 McNaught in early 2007.

Solar Orbiter’s data from Comet Leonard will give astronomers a lot to puzzle over in the future. And, of course, its primary mission of observing the sun is still coming up. Müller said:

There is so much to look forward to with Solar Orbiter. We’re only just getting started.

Bottom line: ESA’s Solar Orbiter passed through the tail of Comet Leonard on its way to the sun, sampling particles and taking images in visible and ultraviolet light. 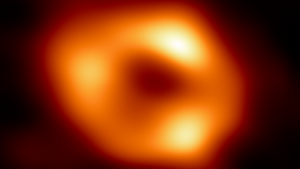 He found a Milky Way black hole 50 years ago, and finally got to see it