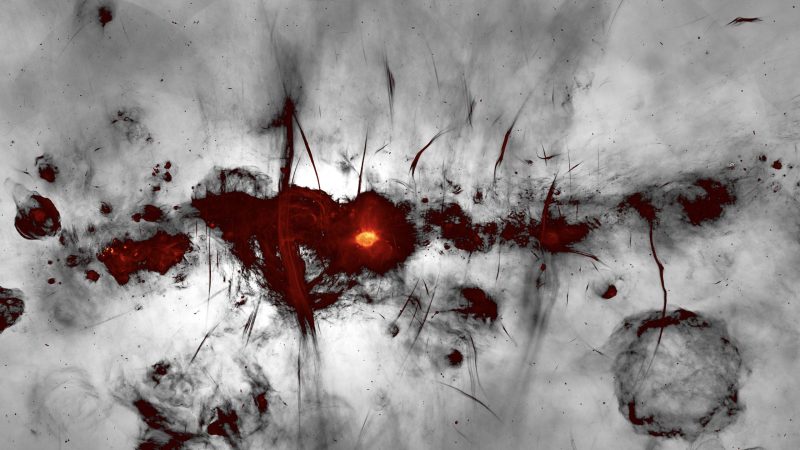 The South African Radio Astronomy Observatory (SARAO) released the new mosaic image above this week (January 26, 2022). It reveals, uniquely, the core of our Milky Way galaxy in a way we’ve not seen before. The mosaic – made with images from SARAO’s MeerKAT telescope – shows our galaxy’s core as churning with activity. You can see, among other features, radio emissions from the chaotic region around the 4-million-solar-mass black hole that lies some 25,000 light-years from us, at the heart of our Milky Way.

The peer-reviewed Astrophysical Journal published these new findings – which come from an international team of scientists – on January 25.

Seeing into the galaxy’s heart

We humans use our eyes to see in visible light. However, the tools of modern astronomers include radio telescopes, sensitive to radiation from the radio end of the electromagnetic spectrum. And radio waves are an excellent choice for peering into the heart of our Milky Way galaxy. That’s because – to the eye – cloaking clouds of dust lie between us and the center of the galaxy. But, radio waves travel through these clouds. The image from MeerKAT reveals new supernova remnants – nebulous remains of exploded stars – including a rare, nearly spherical supernova remnant. In addition, astronomers also got a peek at a population of mysterious radio filaments in the galaxy. Ian Heywood of the University of Oxford and Rhodes University commented:

“I’ve spent a lot of time looking at this image in the process of working on it, and I never get tired of it. When I show this image to people who might be new to radio astronomy, or otherwise unfamiliar with it, I always try to emphasize that radio imaging hasn’t always been this way. And what a leap forward MeerKAT really is in terms of its capabilities! It’s been a true privilege to work over the years with colleagues from SARAO who built this fantastic telescope.”

Three years in the making

Overall, it took three years for Meerkat to gather the data needed for the new mosaic image at top. Altogether, the mosaic required 20 separate observations using 200 hours of telescope time. The image covers six square degrees, or 30 times the area of a full moon.

The MeerKAT telescope surveyed the sky during its commissioning phase. Indeed, earlier observations by the telescope had already yielded great images and discoveries. In fact, in 2018, the initial MeerKAT image made a splash with its clearest-ever view of the galaxy’s core.

MeerKAT also discovered a pair of giant radio bubbles. These radio bubbles are evidence of an explosive outburst several million years ago in the Milky Way’s center.

Long, linear, scratch-like features stand out in the new mosaic. The scientists called these radio-emitting magnetized threads. Some of them are, incredibly, 100 light-years in length. Discovered over 35 years ago, scientists have not yet conclusively explained their origins. MeerKAT discovered nearly 1,000 of these mysterious strands, which scientists studied in a companion paper.

Cool, yes? Surely, the new Meerkat mosaic will provide food for thought for astronomers for years to come.