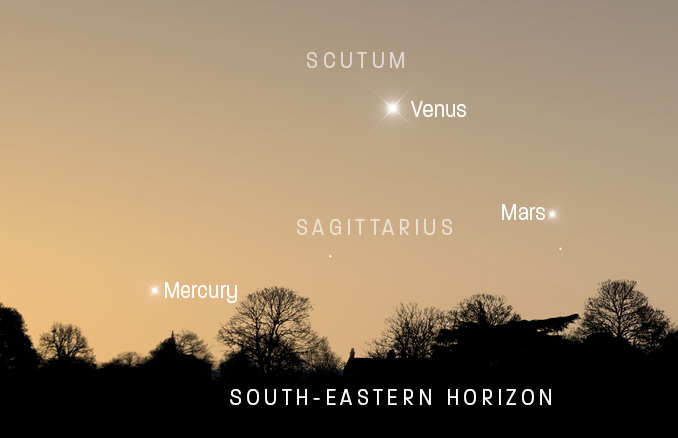 It’s been a pretty inauspicious start to the year for the major planets. Jupiter, following on close behind Saturn’s demise, is now just about done for its current apparition and Mars, the red planet, is merely a shadow of the opposition glories it will offer at the backend of the year.

However, Venus offers some solace during February as a blazing ‘morning star’ that’s reasonably well placed in the pre-dawn sky, provided you don’t mind climbing out of that warm bed and into the frigid February pre-dawn. You’ll be well rewarded though, as from an observing site with an uninterrupted view of the morning horizon from the east-south-east around to the south-south-east, you’ll be ensured a great view of Venus and also have a chance to spot more lowly and fainter Mars and Mercury.

At the start of February, Venus is at the beginning of a morning apparition which sees it pull steadily west of the Sun, reaching greatest elongation west (47°) on 20 March. It now shines just about as bright as it will get at this apparition, blazing away at magnitude –4.6. Venus’ beautiful morning star will be an unmistakable sight, even from light-polluted towns and cities.

From an excellent vantage point, Venus can be seen set against a moderately dark sky; at around 6.20am GMT, the beginning of nautical twilight from London, Venus lies about eight degrees above the horizon. Unfortunately, from progressively farther north in the UK, Venus will appear closer to the horizon for the same degree of twilight. By the beginning of civil twilight from London, which occurs at 7am, Venus climbs to an altitude of around 12 degrees. Through a small telescope, Venus exhibits a beautifully slender crescent. Earth’s twin maintains it brightness and elevation throughout February.

Mars lies south of Venus, situated some degrees farther around to the west. The red planet glows comparatively feebly at magnitude +1.4, brightening only marginally to magnitude +1.25 by the end of February, so it’ll be a good idea to have a pair of binoculars to hand to ensure you can track it down. Mars and Venus close to within seven degrees by 13 February.

Following inferior conjunction last month, elusive Mercury pops its head above the horizon for the first half or so of the month on its way to greatest western elongation from the Sun (26°) on 16 February. This is not a favourable morning apparition from UK shores, with observers in the Southern Hemisphere landing the best views of Mercury this time around.

At the beginning of February Mercury won’t be easy to snare. It shines at around magnitude +0.97 and at about 7am from London it lies just four degrees or so clear of the horizon, to the east of Venus. The planet maintains its lowly position while it brightens to magnitude +0.19 by 10 February.