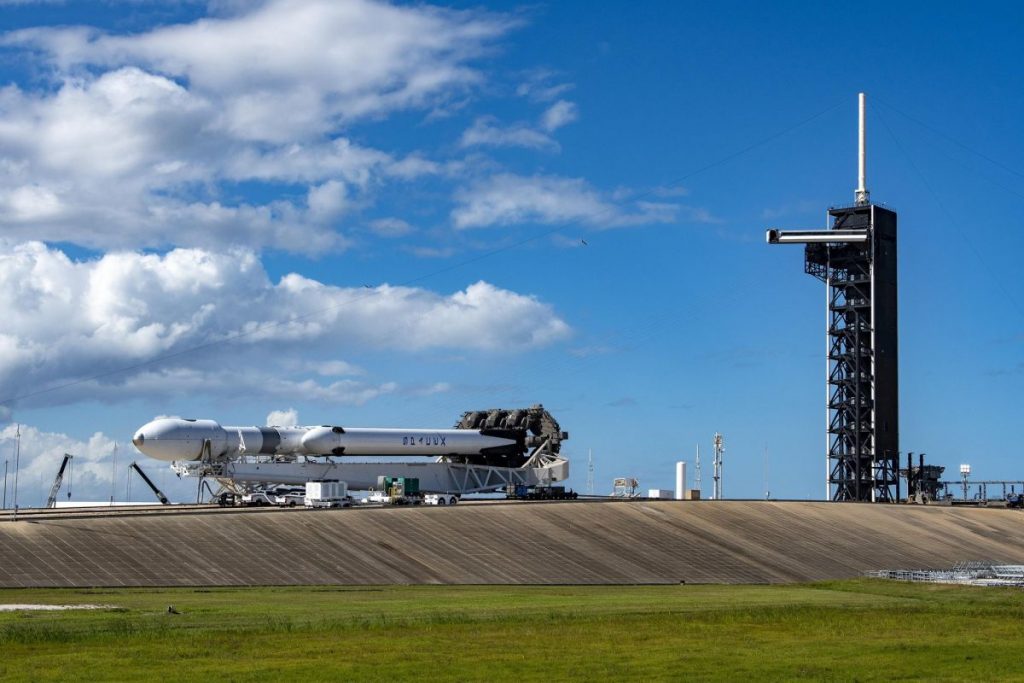 The most powerful operational rocket in the world is at the launch pad ahead of a planned liftoff on Tuesday morning (Nov. 1).

SpaceX rolled its Falcon Heavy rocket out to Launch Complex 39A at NASA’s Kennedy Space Center in Florida on Monday (Oct. 31). If all goes according to plan, the vehicle will lift off Tuesday (Nov. 1) at 9:41 a.m. EDT (1341 GMT), sending a handful of payloads aloft for the U.S. Space Force on a mission called USSF-44.

“Falcon Heavy rolling up the ramp ahead of tomorrow’s targeted launch of the USSF-44 mission; weather is 90% favorable for liftoff,” SpaceX said via Twitter (opens in new tab) on Monday, in a post that shared a photo of the big rocket making the trek to the pad.

Related: Why SpaceX hasn’t flown a Falcon Heavy rocket since 2019

The Falcon Heavy made the journey to the pad on its side. SpaceX lifted the rocket into a vertical position later on Monday, after the sun went down, as the company showed in another tweet (opens in new tab).

Like the Falcon 9, Falcon Heavy first stages are designed to land vertically after liftoff and for future reuse. But on USSF-44, only the outer two boosters will come back to Earth in one piece. The central booster will ditch into the sea, its propellant tapped out by the challenging mission, which will carry its payloads toward distant geostationary orbit.

USSF-44 will be just the fourth-ever Falcon Heavy mission and its first since June 2019. The rocket has a lot of flights on its manifest; the dry spell is primarily due to delays in the delivery of customer satellites.

This Falcon Heavy has been at Pad 39A before: SpaceX rolled the rocket out last week to conduct a static fire, a routine test that briefly ignites first-stage engines while a vehicle remains anchored to the ground.

The static fire occurred without the USSF-44 payloads atop the rocket. After the test, SpaceX rolled the rocket back to its hangar to integrate the satellites, about which little is known. (The main payload, a spacecraft called USSF-44, is classified.)

Editor’s note: This story was updated at 2 a.m. ET on Nov. 1, to state that SpaceX had raised the Falcon Heavy to a vertical position at the pad.