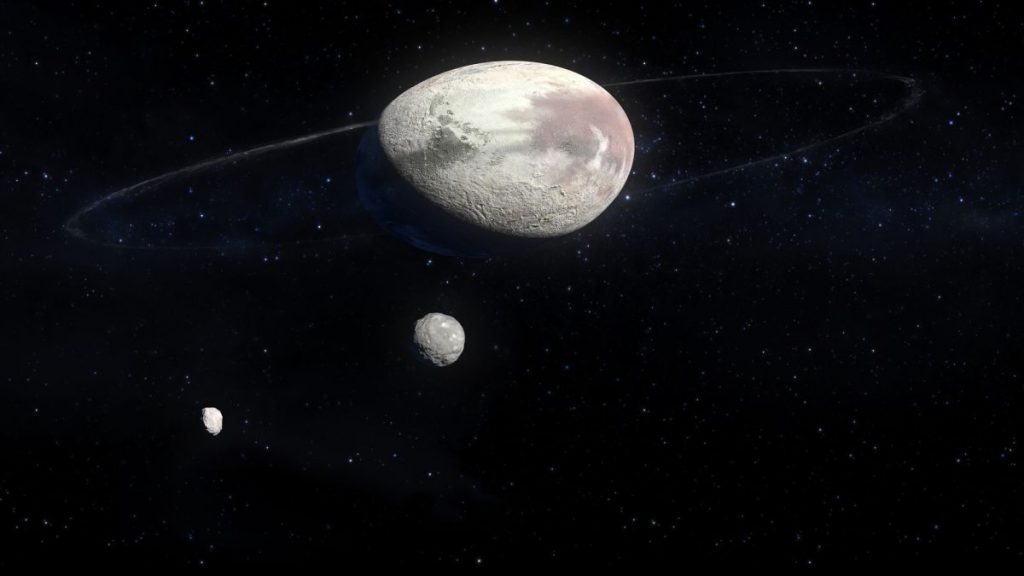 The origins of a dwarf planet that lurks at the outer edge of the solar system that has become one of its strangest objects may have been revealed by NASA scientists.

Haumea is around the size of fellow dwarf planet Pluto and is located in the Kuiper belt, a collection of icy debris and cometary bodies out past the orbit of Neptune — the solar system‘s outermost planet.

Haumea is notable because it spins faster than any other solar system object of a similar size, completing a rotation around its axis — or a ‘day’ — in just four hours.

This rapid spin has resulted in Haumea developing a shape that resembles a deflated football rather than a sphere. Its shape isn’t the only unusual thing about this dwarf planet, however.

Haumea also has a surface that is mostly made of a kind of water ice unlike most of the other bodies in the Kuiper Belt.

This water-ice surface is shared by some of Haumea’s siblings that also appear to share the same orbit as the dwarf planet. This has led scientists to conclude Haumea and these icy bodies share the same origin and that they form the only ‘family’ of related objects found in the Kuiper Belt — the ‘Haumean family.’

Using computer simulations, NASA scientists including Goddard Space Flight Center in Greenbelt, Maryland, post-doctoral student Jessica Noviello investigated the question “How did something as weird as Haumea and its family come to be?”

Computer simulations are necessary to achieve this due to the fact the dwarf planet is too far away to measure precisely using an Earth-based telescope, and Haumea is yet to be visited by a space mission.

These simulations allowed the team to ‘take apart’ Haumea and then rebuild it from scratch. The aim of this was to understand the chemical and physical processes that shaped the dwarf planet.

“To explain what happened to Haumea forces us to put time limits on all these things that happened when the solar system was forming, so it starts to connect everything across the solar system,” team member and Arizona State University in Tempe, professor of astrophysics, Steve Desch said in a statement. “There are a lot of odd, ‘gee whiz’ parts to Haumea, and trying to explain them all at once has been a challenge.”

The model developed by the team started with the input of just three pieces of data about Haumea; its estimated size, its estimated mass, and its short four-hour-long “day.”

Using this information Noviello was able to determine how the dwarf planet’s mass is distributed and how that distribution has influenced its spin. From here the researcher set about simulating billions of years of evolution for Haumea searching for the right set of features that would result in the dwarf planet astronomers observe today.

“We wanted to understand Haumea fundamentally before poking back in time,” Noviello said.

The team made the assumption that the infant Haumea was around 3% larger than its current size with this difference accounting for the creation of its Kuiper belt siblings.

The scientists also assumed the young dwarf planet rotated at a different speed and that its volume was larger than it is today.

Altering the features of Haumea in the models they developed allowed the team to run dozens of simulations viewing how small changes like increasing or decreasing the size of the dwarf planet changed its evolution.

Arriving at a model that delivered a simulated Haumea just like astronomers observe today told the team they had hit on the right early features and the current evolutionary path for the Kuiper belt dwarf planet.

Noviello and her colleagues’ modeling revealed that in its early years and during an epoch of the solar system that was marked by chaotic conditions Haumea collided with another body in a powerful impact.

This resulted in pieces breaking away from young Haumea, but these fragments didn’t go on to become the Haumean family objects. This is because such a large impact would have knocked the pieces into far more scattered orbits than that possessed by the Haumean family bodies.

Desch said the objects that comprise the Haumean family likely would have actually formed later in the dwarf planet’s existence as its structure was developing. In this later period of its evolution dense, rocky material was sinking to the dwarf planet’s center while lighter-density ice was rising to its surface.

“When you concentrate all the mass towards the axis, it decreases the moment of inertia, so Haumea ended up spinning even faster than it does today,” Desch said. This would result in rotational speeds fast enough to throw off surface ice which went on to become the Haumean family.

This moment of inertia would have further increased, decreasing the dwarf planet’s rate of spin as a result of radioactivity from the rocks of the Haumea melting surface ice. This water soaked to the center of the dwarf planet caused rocky material there to swell to a large but less dense clay core.

The team’s research was published in the Planetary Science Journal on Sept. 29.