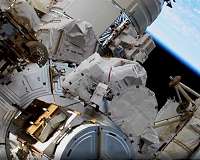 Two NASA astronauts plan to conclude a power systems upgrade for the International Space Station during a spacewalk Tuesday.

The spacewalk is to begin about 7:35 a.m. EDT and last up to seven hours, according to NASA, which will provide live-stream video coverage. The spacewalk will be the 300th involving U.S. astronauts since Ed White stepped out of his Gemini 4 capsule on June 3, 1965.

It will be the fourth spacewalk since June for Behnken and Cassidy, and the final outing for Behknen before he is scheduled to return home Aug. 2 on SpaceX’s historic Crew Dragon demonstration mission.

Behnken and astronaut Doug Hurley arrived at the space station May 31 as part of the historic return to human spaceflight from U.S. soil. The mission also marked the first time Elon Musk’s SpaceX carried people into space.

NASA extended the SpaceX mission — originally planned for five days — to more than eight weeks so that the battery swaps could be finished. Astronauts have removed 48 aging power cells and installed 23 of the newer, 400-pound batteries.

The space station is powered largely by solar power stored in batteries that are accessible only from space.

Also on Tuesday, the spacewalkers will prepare the exterior of the space station’s Tranquility module for a new commercial airlock built by Houston-based NanoRacks.

SpaceX plans to deliver the specialized airlock later this year that will enable public and private research on the outside of the space station.

Behnken and Hurley are due to splash down off the coast of Florida less than 19 hours after they left the space station Aug. 1.