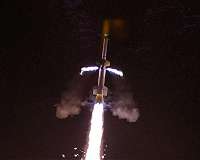 Rocket Factory Augsburg AG (RFA), a participation of space technology company OHB SE, will be establishing a launch site for a micro launcher together with Norwegian company Andoya Space. The two partners have now signed a letter of intent to this effect. The site is to provide launch services for small satellites from 2022.

“This partnership is of key importance as it will enable RFA and Andoya Space to launch the first satellite from continental Europe on a European launch vehicle,” said Dr. Stefan Brieschenk, Chief Operation Officer of RFA.

Jorn Spurmann, Chief Commercial Officer of RFA, added: “We are convinced that with Andoya Space we have found the best partner to offer our customers our end-to-end launch service from 2022 onwards”.

Andoya Space is building the new launch complex on the island of Andoya, 35 kilometres south of the existing launch site for suborbital flights. This new site will provide independent integration facilities and access to two launch pads with the necessary support infrastructure for operators of launchers in the 1.5 ton payload class.

RFA is supported by space technology company OHB SE and Munich-based venture capital firm Apollo Capital Partners as strategic investors. The company is currently developing a launcher system called RFA ONE with a payload capacity of 1.5 tons. The launcher is intended to place small satellites in a low earth orbit from Europe. The first launch is planned for 2022. RFA has recently qualified the tank system of the upper stage of the launch vehicle in cryogenic tests and is currently preparing hot fire tests of the main engine in Esrange, Sweden.

“We are convinced that Rocket Factory Augsburg is one of the most advanced small satellite launch vehicle companies in Europe. Having them commit to Andoya Space as a partner is of great significance to us. RFA has the technical capabilities, innovative culture and enthusiastic team that we need in a partner to move our project forward. We look forward to supporting them in their missions into polar and sun-synchronous orbits,” says Odd Roger Enoksen, CEO and President of Andoya Space.

Blue Origin postpones Texas launch of experiments for NASA, universities
Washington DC (UPI) Sep 24, 2020
Blue Origin postponed the launch of the company’s reusable New Shepard rocket Thursday in Texas, citing internal power supply issues for NASA and university experiments on board.
“Launch is scrubbed for today. New launch target forthcoming,” the company announced on Twitter.
Liftoff had been scheduled for 12:40 p.m. EDT at Blue Origin’s launch facilities about 150 miles east of El Paso. The company had delayed an earlier launch Thursday due to clouds in the area.
The launch would … read more