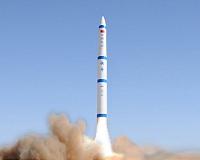 The debut mission of Kuaizhou 11, the newest in China’s carrier rocket fleet, failed on Friday, according to its maker.

The rocket blasted off at 12:17 pm at the Jiuquan Satellite Launch Center in northwestern China’s Gobi Desert to send two small satellites to two different orbits. During its flight, some abnormalities emerged and resulted in failure, China Aerospace Science and Industry Corp, one of the nation’s major space contractors, said in a statement, adding that engineers are investigating the incident.

A Kuaizhou 11 is 25 meters tall, and has a diameter of 2.2 meters. With a liftoff weight of 78 metric tons, the rocket will be able to place a 1-ton payload into a sun-synchronous orbit at an altitude of 700 kilometers, according to CASIC.

Research and development of Kuaizhou 11 began in 2015 at China Space Sanjiang Group in Hubei province, a CASIC subsidiary specialized in solid-fuel rocket.

Designers planned to make its maiden flight in 2017 but the schedule had been repeatedly postponed due to unexpected technical difficulties, the company explained.

CASIC began to develop the Kuaizhou series in 2009 as a low-cost, quick-response product for the commercial space market. Kuaizhou is the largest solid-propellant rocket family in China, as opposed to the Long March series that mainly relies on liquid fuel.