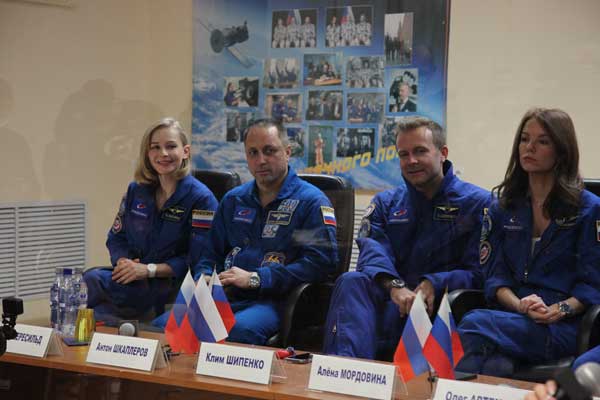 MOSCOW (Roscosmos PR) — This morning, October 17, 2021 at 07:35:44 Moscow time, the descent vehicle of the manned transport spacecraft Yu.A. Gagarin “(Soyuz MS-18), which undocked three hours earlier from the International Space Station, landed at a design point in Kazakhstan. A crew consisting of Hero of Russia, Roskosmos cosmonaut Oleg Novitsky and space flight participants within the framework of the scientific and educational project “Challenge” Klim Shipenko and Yulia Peresild returned to Earth.

All operations on descent from near-earth orbit and landing took place in the normal mode, the crew is feeling well. The ship separated from the Russian segment of the station at 04:14:05 Moscow time. Its propulsion system in the normal mode was turned on for deceleration at 06:41:46 Moscow time, after which it began de-orbiting. Shortly thereafter, the Soyuz split into three compartments, and the crew of three in the descent vehicle experienced overloads of about 4g.

Today, Oleg Novitsky, Klim Shipenko and Yulia Peresild will be delivered by a special board to the Chkalovsky airfield (Moscow region), and then to the Complex for prelaunch training and post-flight rehabilitation of cosmonauts (astronauts) in the Star City. Oleg Novitsky’s rehabilitation will take place in several stages: he will spend the first 2-3 weeks at the Cosmonaut Training Center, and later he will go to a sanatorium. The recovery of Peresild and Shipenko after a short-term flight into space will take about a week. On Tuesday, October 19, the “cinema crew” will give its first press conference.

Let us recall that the launch of the Soyuz-2.1a launch vehicle with the Soyuz MS-18 manned transport vehicle, which received its own name, Yu.A. Gagarin “, took place on April 9, 2021 at 10:42:40 Moscow time from the launch pad number 31 of the Baikonur cosmodrome. After 3 hours and 22 minutes, it docked normally to the Rassvet module of the ISS Russian segment. To do this, he made only two orbits around the planet.

During the work of the crew, dozens of experiments were carried out from various fields of science according to the Russian scientific program (medicine, space biology, biotechnology, physicochemical processes, etc.). Oleg Novitsky together with Peter Dubrov met the new multipurpose laboratory module “Science” on the ISS in July 2021. Both performed the first work on the integration of the “Science” module with the station. On account of them three spacewalks, which they made during the current expedition.

In addition, Novitsky carried out the re-docking of the Yu.A. Gagarin “from the small research module” Dawn “to the module” Science “. Roscosmos cosmonaut Pyotr Dubrov and NASA astronaut Mark Vande Hai were also on board. Thus, “Yu.A. Gagarin “became the first ship to dock at the” Science “.

Klim Shipenko and Yulia Peresild flew to the ISS on the Soyuz MS-19 spacecraft together with Roscosmos cosmonaut Anton Shkaplerov on October 5, 2021. During their flight, a feature film was filmed on board the ISS. The space drama, tentatively titled Challenge, is a story about a female doctor who flies into orbit to rescue an astronaut. Roscosmos cosmonauts Anton Shkaplerov, Oleg Novitsky and Peter Dubrov also took part in the filming. In total, about 35-40 minutes of screen time should have been filmed in orbit.

The completed flight became the third in the career of Roscosmos cosmonaut Oleg Novitsky. His first work in low-earth orbit as commander of the Soyuz TMA-06M manned spacecraft and flight engineer of the 34th ISS prime crew, together with Evgeny Tarelkin and Kevin Ford, began on October 23, 2012 and lasted 143 days. On May 28, 2014, Oleg Viktorovich was awarded the high title of Hero of the Russian Federation.

Despite his busy work schedule, Oleg Novitsky also found time to publish photographs and videos on the pages in social networks VKontakte, Facebook, Twitter and Instagram, thanks to which thousands of people around the world have become even closer to space.

Julia Peresild was selected for a unique flight among three thousand applicants. She and Klim Shipenko had to undergo an accelerated training course. During the space flight, Shipenko acted as an operator.