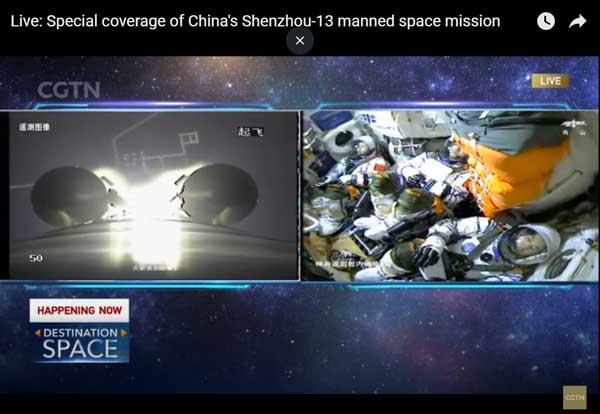 The Shenzhou-13 spacecraft carrying commander Zhai Zhigang and crewmates Wang Yaping and Ye Guangfu lifted off from the Jiuquan Satellite Launch Center aboard a Long March 2F booster at 12:23 a.m. (12:23 a.m. EDT Friday). The crew is scheduled to dock with the space station about 6.5 hours after launch.

Zhigang and Yaping are participating in their second space flight. Zhigang, 55, became the first Chinese astronaut to walk in space during the Shenzhou-7 mission in September 2008.

Yaping, 41, became the second Chinese woman to fly to space during the 15-day Shenzhou-10 mission in June 2013. She and two crewmates spent most of the mission aboard the temporary Tiangong-1 space station. Yaping delivered China’s first school lecture from Earth orbit to an audience of 60 million people.

Guangfu, 41, is a rookie who along with Yaping was part of the second group of Chinese astronauts recruited in 2010.

The crew will have a busy six months aboard Tiangong, which is China’s first permanent, multi-module space station. The official Xinhua news agency reported:

One of the main objectives of the mission is to test key technologies for assembly and construction of China’s space station, such as module transfer supported by the robotic arm and manual remote operation, said Lin Xiqiang, deputy director of the CMSA, at a press conference held at the Jiuquan Satellite Launch Center.

The astronauts will perform two or three extravehicular activities during the mission to install the dual-arm connector, the device to link the big and small mechanical arms, as well as suspension device, Lin said.

The mission will further verify the health, living and working support technologies for astronauts’ six-month stay in orbit, he said.

The astronauts will also carry out sci-tech experiments and applications in fields such as space medicine and micro-gravity physics, as well as diversified public science education activities, he said.

Tiangong currently consists of the core module where the astronauts will live and work and the Tianzhou-3 cargo ship, which was launched and automatically docked with the empty station last month.

China plans to launch two science modules to the space station over the next 18 months. A space telescope will be launched that will orbit nearby and be docked with the station periodically for maintenance and upgrades.