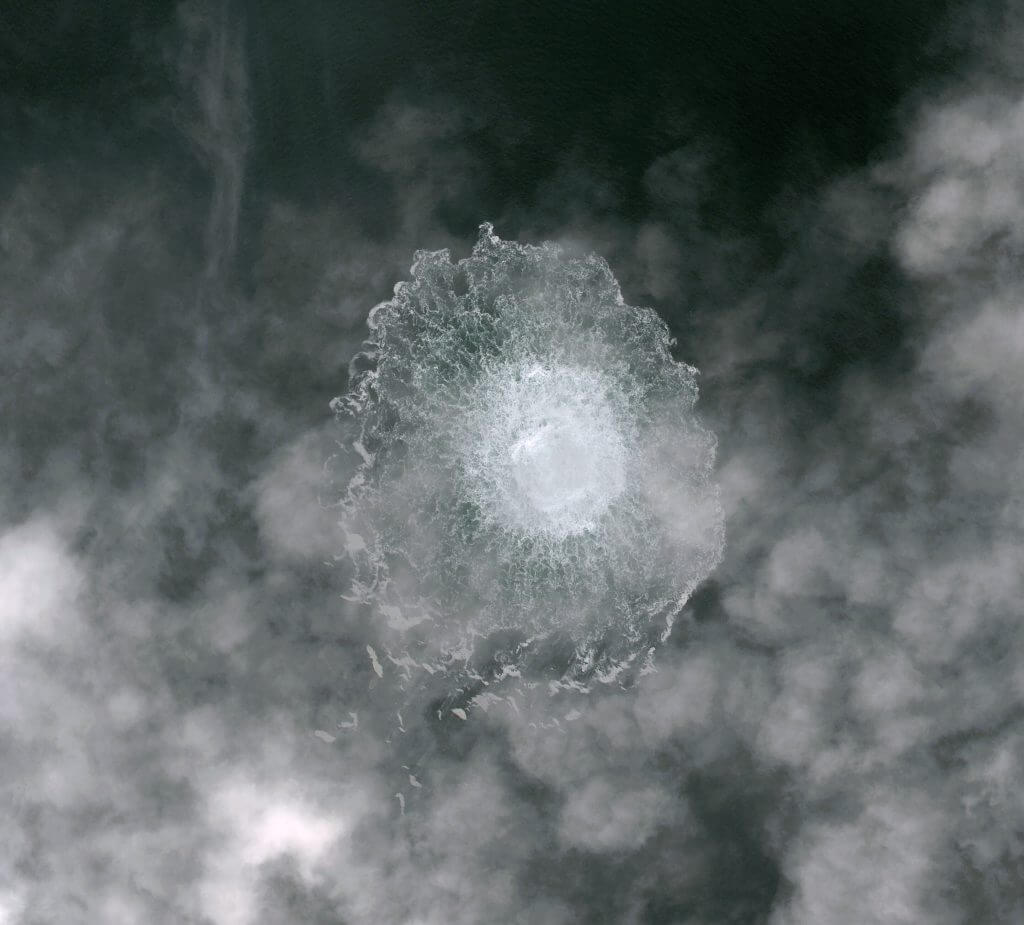 Following unusual seismic disturbances in the Baltic Sea, several leaks were discovered last week in the underwater Nord Stream 1 and 2 gas pipelines, near Denmark and Sweden. Neither pipeline was transporting gas at the time of the blasts, but they still contained pressurized methane—the main component of natural gas—which spewed out producing a wide stream of bubbles on the sea surface.

With the unexplained gas release posing a serious question about the incident’s environmental impact, a suite of complementary Earth observation satellites carrying optical and radar imaging instruments were called upon to characterize the gas leak bubbling in the Baltic.

Although methane partly dissolves in water, released later as carbon dioxide, it is not toxic, but it is the second most abundant anthropogenic greenhouse gas in our atmosphere causing climate change.

Owing to the persistent cloud cover over the area, image acquisitions from optical satellites proved extremely difficult. High-resolution images captured by Pléiades Neo and Planet, both part of ESA’s Third Party Mission Program, showed the disturbance ranging from 500 to 700 m across the sea surface.

Several days later, a significant reduction in the estimated diameter of the methane disturbance was witnessed as the pipelines’ gas emptied. Images captured by Copernicus Sentinel-2 and US Landsat 8 mission confirmed this.

As disturbances such as these cause a “roughening” of the sea surface, this increases the backscatter observed by Synthetic Aperture Radar (SAR) instruments, which are extremely sensitive to changes in the sea surface at such a scale. These include instruments onboard the Copernicus Sentinel-1 and ICEYE constellation—the first New Space company to join the Copernicus Contributing Missions fleet.

ESA’s Scientist for Ocean and Ice, Craig Donlon, said, “The power of active microwave radar instruments is that they can monitor the ocean surface signatures of bubbling methane through clouds over a wide swath and at a high spatial resolution overcoming one of the major limitations to optical instruments. This allows for a more complete picture of the disaster and its associated event-timing to be established.”

What about the methane released?

Although optical satellites can provide us with the radius of the methane bubbling over water, they provide little information on how much methane has been released into the atmosphere.

Monitoring methane over water is extremely difficult as water absorbs most of the sunlight in the shortwave infrared wavelengths used for methane remote sensing. This limits the amount of light reaching the sensor, thus making it extremely difficult to measure methane concentrations over the sea at high latitudes.

GHGSat, a leader in methane emissions monitoring from space and also part of ESA’s Third Party Mission Program, tasked its satellites to measure the Nord Stream 2 gas pipeline leak with its constellation of high-resolution (around 25 m) satellites. By tasking its satellites to obtain measurements at larger viewing angles, GHGSat were able to target the area where the sun’s light reflected the strongest off the sea surface—known as the “glint spot.”

On 30 September, the estimated emission rate derived from its first methane concentration measurement was 79,000 kg per hour—making it the largest methane leak ever detected by GHGSat from a single point-source. This rate is extremely high, especially considering its four days following the initial breach, and this is only one of four rupture points in the pipeline.

GHGSat Director for Europe, Adina Gillespie, said, “Predictably, the media and the world have turned to space to understand the scale of the Nord Stream industrial disaster. While we await further investigation on the cause, GHGSat responded quickly, measuring 79,000 kg per hour of methane coming from the leaks. We will continue tasking GHGSat satellites for the Nord Stream sites until we no longer detect emissions.”

Claus Zehner, Copernicus Sentinel-5P, Altius and Flex Missions Manager, mentions: “Besides GHGSat, the Copernicus Sentinel-2 satellite provided methane concentration measurements emitted by this pipeline leak which highlights the feasibility to use both public funded and commercial satellites in a synergistic way.”

Although closed at the time, the two Nord Stream stems contained enough gas to release 300,000 metric tons of methane—more than twice the amount released by the Aliso Canyon leak in California over several months in 2015–16.

As large as it may be, the Nord Stream release pales in comparison with the 80 million metric tons emitted each year by the oil and gas industry. The latest release is roughly equivalent to one and a half days of global methane emissions.

Methane observations from the Sentinel-5P satellite can observe regions with enhanced methane concentrations from strong point sources all over the world. Satellite observations are a powerful tool for improving estimates of emission strength, seeing how they change over time and can also help detect previously unknown emission sources.

Looking ahead, the upcoming atmospheric Copernicus Anthropogenic Carbon Dioxide Monitoring mission (CO2M) will carry a near-infrared spectrometer to measure atmospheric carbon dioxide, but also methane, at a good spatial resolution. This mission will provide the EU with a unique and independent source of information to assess the effectiveness of policy measures, and to track their impact towards decarbonizing Europe and meeting national emission reduction targets.

Yasjka Meijer, ESA’s Scientist for Copernicus Atmospheric Missions, commented, “The CO2M Mission will provide global coverage and has a special mode above water to increase observed radiances by looking toward the sunglint spot, however it will be equally limited by clouds.”

Citation:
Satellites detect methane plume in Nord Stream leak (2022, October 6)
retrieved 7 October 2022
from https://phys.org/news/2022-10-satellites-methane-plume-nord-stream.html
This document is subject to copyright. Apart from any fair dealing for the purpose of private study or research, no
part may be reproduced without the written permission. The content is provided for information purposes only.