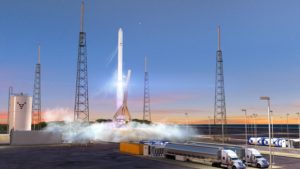 WASHINGTON — A NASA small launch vehicle competition attracted bids from 10 companies, but half of them were effectively disqualified because of deficiencies or other problems.

NASA announced Dec. 11 it was awarding contracts to Astra Space, Firefly Aerospace and Relativity Space for its Venture Class Launch Services (VCLS) Demo 2 program. The contracts, with a combined value of $16.7 million, include one launch by each company carrying clusters of cubesats as part of a NASA effort to help demonstrate new small launch vehicles.

The agency did not disclose the number of bidders for the VCLS Demo 2 competition at the time of the contract award. It did, though, release a source selection statement Dec. 23 that outlined the agency’s assessment of the proposals it received and why it selected the three companies for contracts.

A tenth bidder was Wagner Star Industries, a startup that, according to its LinkedIn page, is developing a “spaceplane drone.” The source selection statement didn’t indicate which mission the company submitted a proposal for, but noted that the bid arrived past the deadline and was not evaluated.

Three of the seven proposals for Mission One had technical deficiencies that also disqualified from consideration. Gloyer-Taylor Laboratories, whose website states it is developing a family of launch vehicles called Advanced Cryogenic Expendable (ACE), submitted a proposal that NASA found had two deficiencies. The proposal “did not demonstrate the knowledge, skill and understanding” needed to meet the agency’s requirements, and sought unspecified “unacceptable exceptions to terms and conditions” regarding milestone payments and launch schedule.

Interorbital Systems, a company working for two decades on the Neptune series of launch vehicles without yet attempting an orbital launch, demonstrated “a lack of understanding of the complexity of a space launch service” in its VCLS Demo 2 proposal, according to the source selection statement. “As a result, the proposal materially failed to meet the solicitation requirements, and this increases the risk of unsuccessful contract performance to an unacceptable level,” NASA concluded.

Phoenix Launch Systems’ proposal, NASA concluded, was deficient since it didn’t demonstrate that its vehicle “has the capabilities to meet the proposed Mission One requirements.” The statement didn’t elaborate on those shortfalls, but the company’s website describes a vehicle capable of placing 22 kilograms into a 400-kilometer orbit, below the Mission One requirements of 30 kilograms of cubesats deployed in a 500-kilometer orbit.

NASA did evaluate the proposals of the other four companies on both their technical and management merits, as well as price, with those two factors weighted equally. Astra “clearly provided the strongest overall proposal and technical solution,” Scott Syring, the source selection authority at NASA for the VCLS Demo 2 contract, concluded. The company was the only one of the four to have a “significant strength” in the form of a “mature launch vehicle design.” Astra is the only one of the four companies to have yet attempted an orbital launch, coming close to reaching orbit on its second launch Dec. 15.

Aevum, which rolled out Dec. 3 a prototype of the drone that will serve as the platform for its Ravn X air launch system, was cited for six significant weaknesses, ranging from contamination issues with the payload fairing to a lack of details on the propulsion system for the launch vehicle and a schedule that indicated to NASA that “they do not fully understand the complexity and challenges associated with achieving first launch.” That, as well as a proposed price “significantly higher” than Astra’s $3.9 million, ruled Aevum out for an award.

For the other two companies, NASA found strengths in Relativity’s proposal regarding its concept of operations and launch vehicle risk reduction, but a weakness regarding its development schedule. Phantom, a startup led by former Vector chief executive Jim Cantrell, suffered three significant weaknesses regarding payload accommodations and environment as well as concerns the company would not be able to raise the funding needed to develop its vehicle. It was cited for strengths regarding design and test plans for the vehicle and its concept of operations.

Relativity’s bid of $3 million was “slightly higher” than Phantom’s price, but Syring concluded that the “slightly higher price is more than offset by the reduced level of risk,” and thus gave an award to Relativity.

The competition for Mission Two was relatively straightforward. Firefly was praised for its “mature concept of operations” for its launch system, including a “flexible manifest” to accommodate any delays.

The proposal from Momentus, which provides in-space transportation services for satellites launched as secondary payloads, was deemed deficient by NASA since the satellites would not launch as the primary payloads, as required for the Mission Two concept. While Momentus received a significant strength for using an unnamed but certified launch vehicle for the mission, the failure to launch as a primary payload “makes their proposal unawardable,” Syring concluded.

NASA decided to give Firefly the Mission Two award after concluding from market research that its price of $9.8 million was “fair and reasonable.”