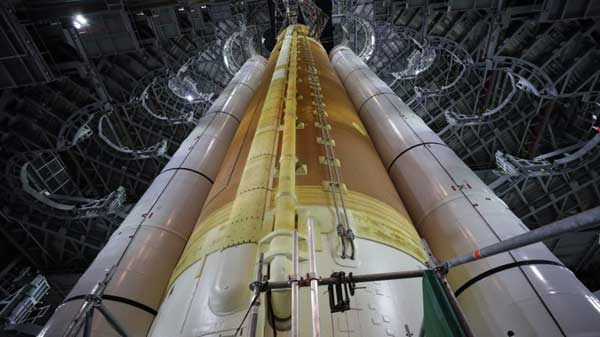 HUNTSVILLE, Ala. (NASA PR) — NASA has completed the design certification review (DCR) for the Space Launch System Program (SLS) rocket ahead of the Artemis I mission to send the Orion spacecraft to the Moon. The review examined all the SLS systems, all test data, inspection reports, and analyses that support verification, to ensure every aspect of the rocket is technically mature and meets the requirements for SLS’s first flight on Artemis I.

“With this review, the NASA has given its final stamp of approval to the entire, integrated rocket design and completed the final formal milestone to pass before we move forward to the SLS and Artemis I flight readiness reviews,” said John Honeycutt, the SLS Program Manager who chaired the DCR board held at NASA’s Marshall Space Flight Center in Huntsville, Alabama.

In addition to the rocket’s design, the review certified all reliability and safety analyses, production quality and configuration management systems, and operations manuals across all parts of the rocket including, interfaces with the Orion spacecraft and Exploration Ground Systems (EGS) hardware. With the completion of the SLS DCR, NASA has now certified the SLS and Orion spacecraft designs, as well as the new Launch Control Center at the agency’s Kennedy Space Center in Florida, for the mission.

The DCR is part of the formal review system NASA employs as a systematic method for manufacturing, testing, and certifying space hardware for flight. The process starts with defining what the rocket needs to do to achieve missions, such as its performance; these are called systems requirements. Throughout this process the design of the hardware is refined and validated by many processes: inspection, analysis, modeling, and testing that ranges from single components to major integrated systems. As the design matures, the team evaluates it during a preliminary design review, then a critical design review, and finally after the hardware is built and tested, the design certification review. The review process culminates with the Artemis I Flight Readiness Review when NASA gives a “go” to proceed with launch.

“We have certified the first NASA super heavy-lift rocket built for human spaceflight in 50 years for missions to the Moon and beyond,” said David Beaman, the manager for SLS Systems Engineering and Integration who led the review team. “NASA’s mature processes and testing philosophy help us ask the right questions, so we can design and build a rocket that is powerful, safe, and makes the boldest missions possible.”

Artemis I will be the first integrated flight test of the SLS and Orion spacecraft. In later Artemis missions, NASA will land the first woman and the first person of color on the surface of the Moon, paving the way for a long-term lunar presence and serving as a steppingstone on the way to Mars.