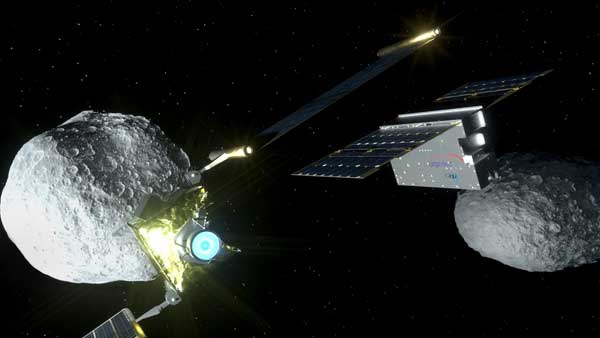 An Italian microSat, made by Argotec and ASI, which will fly with NASA towards an asteroid

ROME (ASI PR) — LICIACube, the microsatellite built entirely in the Argotec plants in Turin on behalf of and in collaboration with the Italian Space Agency (ASI), will be delivered and shipped in the coming weeks to the integration site in the United States in preparation for the launch, scheduled for the end year, of the first planetary defense mission from future potential asteroid threats.

The Italian microsatellite will in fact be among the protagonists of NASA’s DART mission , which aims to verify the possibility of modifying the orbit of the smallest asteroid of the double Didymos system through the impact of the American probe, at a speed of about 21,000 km/h, about 11 million kilometers from Earth.

LICIACube, after a journey of about 11 months aboard DART, will separate from the NASA probe a few days before the impact to acquire high resolution images of the crater and the debris generated by the collision, to allow a complete assessment of the impact effects. All the data produced in this phase of the mission will be fundamental to verify the effectiveness of the variation capacity of the asteroid orbit through this technique. Furthermore, the Italian and American scientific teams will use the data acquired by DART and LICIACube for investigations on the nature and composition of the asteroid.

The small Italian satellite platform of only 30x20x10cm, using powerful optics and software based on artificial intelligence, will be able to recognize celestial objects in the field of view of the camera, autonomously carry out orbital maneuvers and capture images and scientific data that will be indispensable in the validation of this technique for the defense of the Earth from potential external threats such as asteroids.

The LICIACube mission will be among the most challenging ever carried out by a microsatellite in the difficult conditions of deep space, also due to the high speed with which the satellite will fly over the scene of the DART impact with the asteroid.

This project outlines a new technological starting point for the future of small satellite missions to support space exploration.

“With the Hawk platform, an all-Italian microsatellite will be able to monitor the kinetic impact of a probe with an asteroid,” said David Avino, Managing Director of Argotec. “LICIACube will also be the Italian object that will reach such a remote target for the first time in history. These firsts represent a great responsibility for the Argotec team but at the same time a source of pride for Italy.”

“ASI has always paid great attention to the challenges offered by exploration,” declared Giorgio Saccoccia, president of the Italian Space Agency (ASI). “LICIACube is a typical example of the Agency’s action in the exploration of space beyond the earth’s orbit and the roadmaps, under development, always aim at objectives. more ambitious. Our country has both the skills and the industrial and scientific capabilities to interact with the most prestigious space realities and the fact that NASA has selected Italy is not by chance but the result of a long history of collaboration.”

At the moment there is no imminent danger of a possible impact, but the collision of an asteroid with the Earth is a non-negligible risk. This mission represents the first step towards a new mode of planetary defense, and it is significant and very important that Italy will also play a decisive role with LICIACube.

LICIACube is a 6U cubesat built in the Argotec plants in Turin on behalf of and in collaboration with the Italian Space Agency (ASI), which 10 days before the impact will be released into space and will carry out, in autonomous navigation, a fly- by the asteroid system, keeping about 50 kilometers away. With his two cameras on board (LEIA, Liciacube Explorer Imaging for Asteroid; and LUKE, Liciacube Unit Key Explorer) he will be a direct witness of the impact of DART on Dimorphos. The all-Italian LICIACube team includes researchers from the National Institute of Astrophysics  (INAF), the Milan Polytechnic, the University of Bologna and Parthenope of Naples, and the IFAC-CNR of Florence., and is coordinated by Elisabetta Dotto (INAF).

LICIACube will be the first deep space mission developed and managed independently by an Italian team and, in addition to witnessing the impact of DART in-situ, it will carry out autonomous science during its fly-by with Dimorphos. In recent months, INAF has coordinated with the Galileo National Telescope (TNG) a campaign of spectroscopic observations of the asteroid Dydimos that covers the entire rotation of the object.