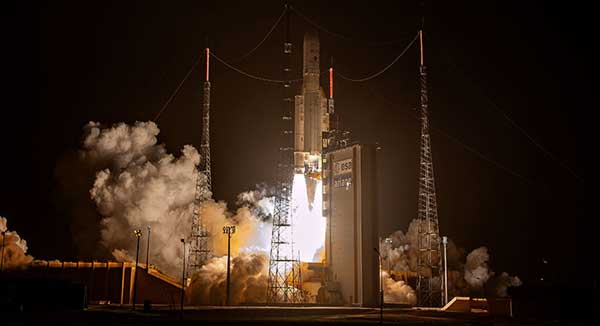 EVRY, France (Arianespace PR) — Arianespace’s next Ariane 5 launch from the Guiana Space Center (CSG) in Kourou, French Guiana, is scheduled for Friday, July 30, during a launch window from 21:00 to 22:30 UTC. Initially planned for July 27, the mission was rescheduled after a revision to the preparation schedule.

Star One D2 is a high-capacity, multi-mission satellite with Ku-, Ka-, C- and X-band transponders that will enable it to expand broadband coverage to new regions in Central and South America, provide internet access to underserved populations and add an updated X-band payload for government use over the Atlantic region. Built on Maxar’s proven 1300-class platform at the company’s Palo Alto, California, manufacturing facility, Star One D2 will improve access to high-quality services, serving the parabolic fleet in Brazil, Pay TV, cell phone backhaul, data, video and Internet for corporate customers and government agencies.

EUTELSAT QUANTUM was developed under a public-private partnership between the European Space Agency (ESA), operator Eutelsat and Airbus Defence and Space. Using a software-based design, EUTELSAT QUANTUM will be the world’s first universal satellite to repeatedly adjust to business requirements. It features an electronically steerable receiving antenna and operates in Ku-band with eight independent reconfigurable beams. This configuration allows the operator to reconfigure in-orbit the radio-frequency beams over the coverage zones, providing unprecedented flexibility in data, government and mobility services.

This mission will use the Ariane 5 heavy-lift launcher developed and manufactured by ArianeGroup within the scope of a joint European government-industry program. Arianespace is responsible for marketing and operating Ariane 5 launches from the Guiana Space Center in Kourou, French Guiana. The French space agency CNES is the launcher design authority and ESA is the project owner of the program. ArianeGroup is in charge of all design and production, from initial design studies, upgrades and manufacturing, to the supply of data and software for each mission. Its specific responsibilities include the production of equipment, structures and propulsion systems, integration of the different stages, and integration of the complete launcher in French Guiana.

To follow the launch live, go to arianespace.com or watch the Arianespace YouTube channel at youtube.com/Arianespace (audio feed in English starting around T-30 minutes).

Arianespace uses space to make life better on Earth by providing launch services for all types of satellites into all orbits. It has orbited over 900 satellites since 1980, using its family of three launchers, Ariane, Soyuz and Vega, from launch sites in French Guiana (South America) and from the Russian cosmodromes in Baikonur and Vostochny. Arianespace is headquartered in Evry, near Paris, and has a technical facility at the Guiana Space Center in French Guiana, plus local offices in Washington, D.C., Tokyo and Singapore. Arianespace is a subsidiary of ArianeGroup, which holds 74% of its share capital, with the balance held by 15 other shareholders from the European launcher industry.