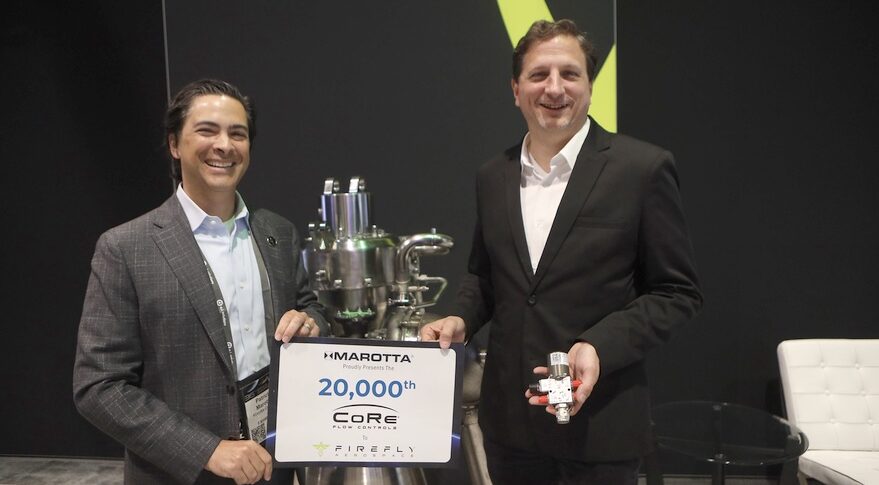 COLORADO SPRINGS — Firefly Aerospace is ready to make its first orbital launch attempt next week as the company balances a transition to operations with plans to develop new rockets and spacecraft.

Firefly announced Aug. 19 that it had set a Sept. 2 date for the first launch of its Alpha rocket from Vandenberg Space Force Base in California. The announcement came a day after the small launch vehicle performed a successful 15-second static fire test on the pad at Vandenberg.

In an interview during the 36th Space Symposium here Aug. 24, Tom Markusic, chief executive of Firefly, said the only milestone left before the scheduled launch is finalizing paperwork. “The static-fire test was perfect,” he said. “If we had let the rocket go it would have flown. All the data looks great.”

The company has extensively tested that rocket, including nearly 20 hot-fire tests. “This vehicle has definitely been put through its paces,” he said. “We’re ready to go.”

The rocket could have been ready sooner but for the delayed delivery of a component needed for its flight termination system. Markusic declined to identify the specific component or its supplier, but said it was one of the few major components that the company did not develop in-house.

“The vendor could not get the components qualified and delivered on time,” he said. “We’re a year behind schedule on that flight termination system.”

The inaugural Alpha launch will carry a payload called the Dedicated Research and Education Accelerator Mission (DREAM), a Firefly initiative to provide a free launch for academic and other private payloads. The launch will also test components of an orbital transfer vehicle the company is developing called the Space Utility Vehicle.

If the first launch is a success, Markusic said a second Alpha would be ready for launch as soon as December carrying a commercial payload. However, he acknowledged that the first launch of a new vehicle carries a higher risk of failure.

“It’s not unusual to have an anomaly on the first flight and then, just depending on the severity of the anomaly, it could be several weeks to several months” to correct the problem, he said. “Alpha is a pretty straightforward rocket design, so whatever problem we might have, we think it is something that can be addressed relatively quickly.”

A successful launch would create a different set of challenges, as Firefly moves from development to operations. “The transition from R&D to production is going to be very hard,” Markusic said.

Firefly announced Aug. 17 it hired a new chief operating officer, Lauren Lyons, who previously worked at SpaceX and Blue Origin. “She is going to focus on establishing the infrastructure and the capability to go to scale production while we still keep and grow that core hardware development capability for new vehicles,” he said. “You have to have both.”

Markusic said he will focus more on new vehicle development, including a medium-class launch vehicle called Beta as well as the Space Utility Vehicle and the Blue Ghost lunar lander. He said Firefly recently completed a conceptual design of Beta, which the company plans to develop over the next three years.

Firefly is also moving into the components business, starting with offering the engines it developed for Alpha to other customers. Markusic said Firefly has a contract to deliver about 50 engines to an unidentified company developing its own launch vehicle.

That’s a departure from the approach most companies have taken to be as vertically integrated as possible. “If you really want to get economies of scale, the more you can make, the better,” he said.

That components business will expand to other items, such as composite-overwrapped pressure vessels. “We have grander aspirations to have a large-scale e-commerce presence,” he said. “The dream is to point, click, and have a rocket engine the next day.”