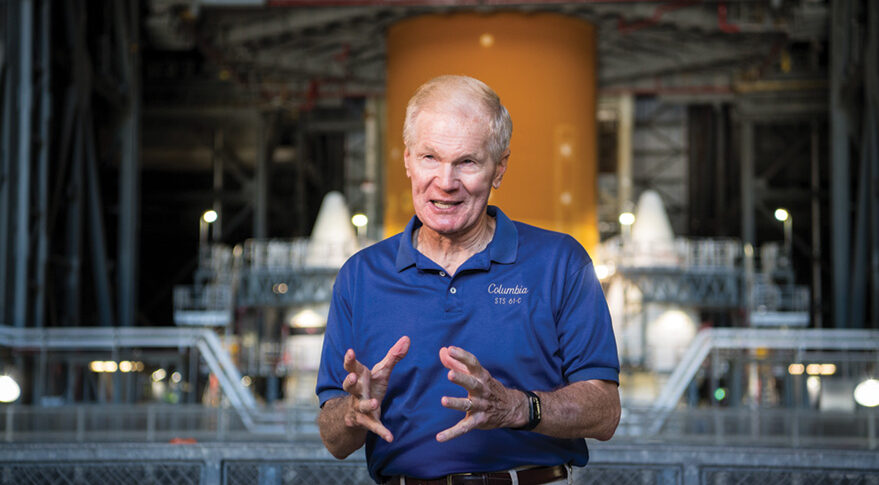 COLORADO SPRINGS — At a press conference at the Kennedy Space Center in late July, NASA Administrator Bill Nelson deflected several questions about the future of the Artemis program and the agency’s ability to return humans to the lunar surface in 2024. He cited a blackout period imposed by the Government Accountability Office’s evaluation of protests filed by Blue Origin and Dynetics of NASA’s award of a single Human Landing System (HLS) contract to SpaceX in April. “I want you to ask me that question next week,” he said at one point, after the deadline for the GAO to rule on the protests.

Next week has come and gone, but hasn’t given the agency the clarity it expected. The GAO dismissed the two protests, but Blue Origin filed a lawsuit in the Court of Federal Claims Aug. 13, effectively appealing the dismissal of the protest. On Aug. 19, NASA announced it would voluntarily pause work on the HLS contract until Nov. 1 in exchange for an expedited review of the case.

That’s not the only challenge facing Artemis. NASA supports adding a second company to the HLS program but is looking for Congress to provide billions of dollars in additional funding to do so, either through the standard appropriations process or a multi trillion-dollar package that Congress will take up through the budget reconciliation process. And a report by NASA’s Office of Inspector General Aug. 10 concluded that, even if the lunar lander is ready in 2024, the spacesuits the astronauts would wear on their Artemis 3 moonwalks won’t be done until 2025.

SpaceNews Senior Staff Writer Jeff Foust spoke with Nelson about these issues, as well as his plans for this week’s 36th Space Symposium, in an interview Aug. 19 several hours before the agency confirmed that it would pause work on the SpaceX HLS contract while the Blue Origin lawsuit is heard in the Court of Federal Claims.

Last month you had hoped that, once the GAO protest was concluded, you would be able to elaborate on your plans for Artemis. Where do things stand now?

Further delay. Blue Origin has filed to the Court of Federal Claims, which in effect is like an appeal. It goes to a court equivalent to a federal district court where the judge could require, in essence, very laborious discovery. A lot of this will be dependent upon what the judge decides.

Are you concerned the case could delay work on the HLS award to SpaceX?

You’ve expressed support for adding a second company to the HLS program, but that requires additional funding. What progress are you seeing in getting that funding from Congress?

There are basically two avenues. In the appropriations process, I expect that to go all the way to the end of the year. Remember this is not just an appropriations bill but also the extension of the debt limit, and that’s going to be a political football. I think what is likely to happen is when you get to the new fiscal year, there will not be an agreement, so they will do a continuing resolution. What typically has happened in the past is that we’re either racing Santa Claus to get home, or one time we were actually in session on New Year’s Eve. So, the appropriations process, including the debt ceiling raising, is going to go until the end of this year.

Another avenue is that you have a reconciliation bill passed. And that’s where I’ve asked for additional money for NASA over the next six years to do the full-up competition for the LETS [Lunar Exploration Transportation Services] contract, which is the contract for about a lander a year over the next decade. I’ve asked for that money and I’ve also asked for money for infrastructure because we’ve got a lot of infrastructure that needs updating. What’s my guess on a reconciliation bill that you have to have all 50 Democrats voting for in the Senate in order to get it passed? Your guess is as good as mine.

In the meantime, that’s why we wanted to proceed with this interim step, what we’ve called NextSTEP Appendix N, which is basically a one-year transition — a bridge, if you will — to keep the other proposers going. Five of them have come in and offered proposals for Appendix N. The next step is an evaluation that will be done by an evaluation board.

NASA’s Office of Inspector General issued a report earlier this month concluding that the spacesuits needed for the Artemis 3 lunar landing mission won’t be ready until at least April 2025. Does that mean a 2024 human return to the moon is off the table now?

I can’t answer your question whether or not, because of delays on the spacesuit or what I just went through about the appropriations and with regard to the legal postures. I don’t know.

In the near term, Artemis 1, the first Space Launch System mission, is approaching. Is that still likely to take place before the end of the year?

If not the end of the year, then in January.

What goals do you have for the Space Symposium, including meetings with heads of other space agencies?

First of all, you need to know that both [U.S. Space Force] General John Raymond and I have made a decision to cut back considerably, because of this delta variant of COVID. I will be there, but we decided that we need to cut the presence of the administrator’s office. So Pam [Melroy, deputy administrator] and Bob [Cabana, associate administrator] are not going to go, and our overall presence is going to be considerably reduced.

However, I’m planning to go because there are a number of meetings with our international partners. Those will go as planned, although the international delegations are considerably cut back as well. I’m having one big kind of roundtable with industry, and we will limit that to one or two people per company, instead of a cast of hundreds of people, in a room that will be spread out, mindful of COVID. Those meetings are very important because this is a forum in which they can see me in the flesh and hear my ideas and get it straight from the horse’s mouth, instead of through the rumor mill or just through the written word.

I’m looking forward to all this. We’re just going to be very sensitive to this raging fire called COVID, but in normal times, it’s a great time to press the flesh, to get to really know a lot of the players, and for mutual getting to know each other. And it’s too bad that we have to cut back, but you have to do what you have to do, given the question of the health of people.

In those meetings with other space agencies, do you have any specific topics you’ll want to discuss, such as Artemis or extending the International Space Station to 2030?

All of the above, and more.

One agency leader who won’t be at Space Symposium is Dmitry Rogozin, the head of Roscosmos. Do you still plan to meet with him later this year?

I hope so, depending on any limitations imposed by COVID.

Will that be in Russia?

You were very familiar with NASA before becoming administrator, but now that you have been on the job for three and a half months, has anything surprised you about the agency?

Well, what does not surprise me is the level of competence, energy, and can-do spirit that I’ve always known in NASA. And as evidence of that, NASA was voted for the ninth year in a row as the best federal agency in which to work. Likewise, NASA was voted the best agency in the federal government to handle COVID. So, I’m not surprised because this incredible little agency does incredible things with incredibly skilled people.

I wouldn’t call it a surprise, because I’ve known over the years that basically OMB always takes a sharp look at your budget. It’s up to us to convince them, and then to convince the Congress, to get the money that we need for cutting-edge technology. That keeps you on your toes all the time. But that’s what’s expected of us and that’s what we’re doing. And I think those are my observations.

My final observation is, I shouldn’t be allowed to have as much fun as I’m having.