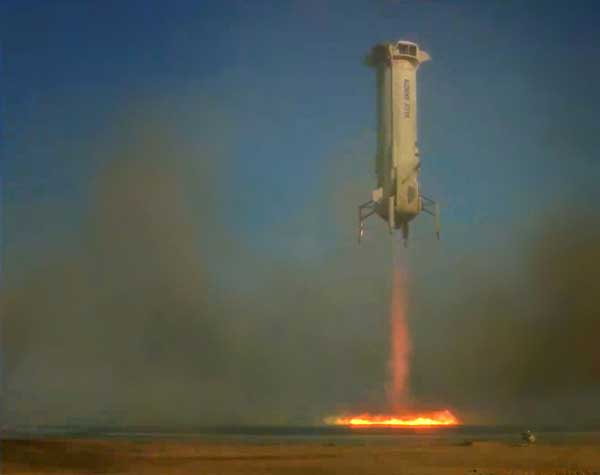 KENT, Wash. (Blue Origin PR) — New Shepard’s next mission will fly a NASA lunar landing technology demonstration a second time on the exterior of the booster, 18 commercial payloads inside the crew capsule, 11 of which are NASA-supported, and an art installation on the exterior of the capsule. Liftoff is currently targeted for Wednesday, August 25, at 8:35 am CDT/13:35 UTC from Launch Site One in West Texas. Live launch coverage begins at T-30 minutes on BlueOrigin.com.

his will be the 17th New Shepard mission to date, the 4th flight for the program in 2021, and the  8th flight for this particular vehicle, which is dedicated to flying scientific and research payloads to space and back.

To date, New Shepard has flown more than 100 payloads to space across 11 flights.

Under a Tipping Point partnership with NASA’s Space Technology Mission Directorate, the NS-17  flight will further test a suite of lunar landing technologies to reduce risk and increase confidence for successful missions to the Moon. The payload will fly mounted on the exterior of the New Shepard booster. This is the second flight for this experiment.

Knowledge gained from the first flight on October 13, 2021 informed a series of critical improvements to further the capabilities of the Navigation Doppler Lidar and the Descent Landing Computer, which would work together to determine a spacecraft’s location and speed as it approaches the surface. The technologies could allow future missions—both crewed and robotic—to target landing sites that weren’t possible during the Apollo missions, such as regions with varied terrain near craters.

The datasets derived from the first flight, including the vehicle truth data and the recorded raw payload sensor data were open sourced earlier this year on data.nasa.gov in service of broader support for U.S. interests in returning to the Moon. An additional dataset from this mission will be open sourced as well.

Unique to NS-17, New Shepard will feature Suborbital Tryptych, which is a series of three portraits by Ghanaian artist Amoako Boafo painted on the top of the crew capsule on the main chute  covers. The portraits capture the artist, his mother, and a friend’s mother. The artwork is part of Uplift Aerospace’s Uplift Art Program, whose purpose is to inspire new ideas and generate dialog by making space accessible and connected to the human experience.

The Modal Propellant Gauging experiment demonstrates a novel approach to measuring propellant levels in spacecraft propellant tanks in the microgravity environment of space. The payload experiment is a joint effort of the Carthage College Space Sciences program and the NASA Kennedy and Johnson Space Centers. Funding was provided by the NASA Flight Opportunities Program and by the Wisconsin Space Grant Consortium.

The Orbital Syngas / Commodity Augmentation Reactor (OSCAR) payload from NASA’s Kennedy Space Center is a reflight of a full stack experiment flown on NS-12. OSCAR aims to help transform common spaceflight waste products into useful resources, such as water and propellants. The system includes a steam generation stage and an oxygen supply stage that help process trash samples into useful gases. Here is a link to a video about the OSCAR payload.

Developed by Southwest Research Institute in San Antonio, TX, the Liquid Acquisition Device (LAD-3) demonstrates how liquid/vapor interfaces behave in microgravity. Applications include cryogenic propellant storage and management for in-space propulsion systems. Funding was provided by NASA’s Flight Opportunities Program. NS-17 will be the third flight of this payload on New Shepard, and will study bubble movement with modified hardware designs.

University of Florida: Biological Imaging in Support of Suborbital Science

Investigators Rob Ferl and Anna-Lisa Paul adapted technology designed for the International Space Station to suborbital uses with their experiment, “Biological Imaging in Support of Suborbital Science.” By further calibrating and enhancing the way data is collected, the FLEX fluorescence imaging system experiment enables increasingly precise and dynamic biological research on suborbital missions. This will be the third flight of the experiment development series on New Shepard. Funding was provided by the NASA Flight Opportunities Program.

Club for the Future

This mission will also fly thousands of postcards from Blue Origin’s foundation, Club for the Future.