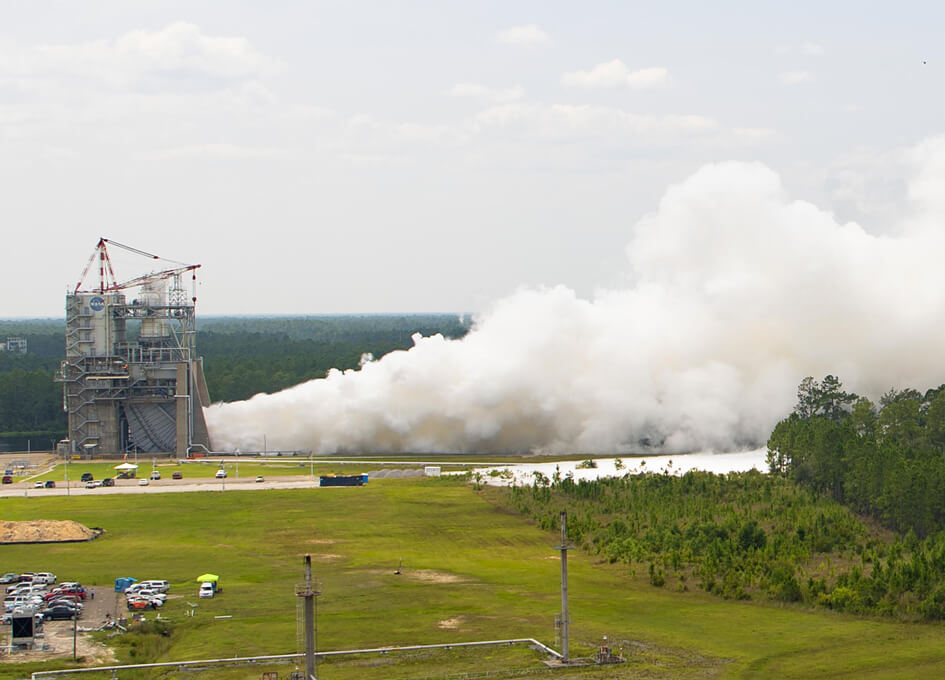 This firing was a continuation of its seven-part test series to support development and production of engines for the agency’s Space Launch System (SLS) rocket on future missions to the Moon.

Operators fired the engine for more than eight minutes (500 seconds), the same amount of time RS-25 engines need to fire for launch of the SLS rocket. Four RS-25 engines, with a pair of solid rocket boosters, will help power SLS at launch. NASA already has tested engines for the rocket’s first four Artemis missions to the Moon, allowing operators to turn their focus towards collecting data to demonstrate and verify various engine capabilities for future engines. Along with providing performance data to Aerojet Rocketdyne, lead contractor for the SLS engines, the Aug. 5 test enabled the team to evaluate new engine components manufactured with cutting-edge and cost-saving technologies, eliminate operating risks, and enhance engine production.

In addition to operating the engine at 109% of its original power level for extended periods during the hot fire, NASA verified new manufacturing processes while evaluating the performance of the engine’s low-pressure fuel turbopump. The pump significantly boosts the pressure of liquid hydrogen delivered to the high-pressure fuel turbopump to help prevent cavitating, the forming of “bubbles” or “voids”, which can collapse or cause shock waves that may damage machinery. NASA is building SLS as the world’s most powerful rocket to send the agency’s Orion spacecraft to the Moon.

With Artemis, NASA will land the first woman and the first person of color on the lunar surface and establish long-term exploration at the Moon in preparation for human missions to Mars. SLS and Orion, along with the commercial human landing system and the Gateway outpost in orbit around the Moon, are NASA’s backbone for deep space exploration. SLS is the only rocket that can send Orion, astronauts, and supplies to the Moon in a single mission. An integrated team conducts RS-25 tests at Stennis Space Center, including NASA, Aerojet Rocketdyne, and Syncom Space Services, the prime contractor of Stennis facilities and operations.