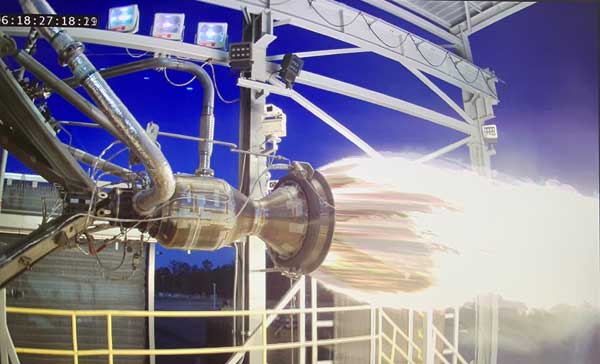 BAY ST. LOUIS, Miss. (NASA PR) — When Virgin Orbit, a satellite-launch company based in California, sought to expand its horizons, it was only natural for the company to think about NASA’s largest rocket engine test site – Stennis Space Center near Bay St. Louis, Mississippi.

With an established, positive reputation, specialized infrastructure equipped to test high-power rocket engines, and a 55-year track record in propulsion testing, Stennis Space Center offered a unique set of benefits, including test stands that can simulate an entire rocket engine, which allows their partners to test single components rather than shipping an entire engine on site.

In November 2020, through a Space Act Agreement that enables NASA to enter partnerships with organizations, Virgin Orbit secured a partnership with Stennis to reimburse the center for any testing costs. As a result, they were given the opportunity to utilize Stennis’ experience and expertise, allowing them to avoid building their own testing facilities while gaining valuable hands-on experience.

The Virgin Orbit’s test campaign had team members focused on the 75,000-pound force Thrust Chamber Assembly (TCA), which consists of an injector, combustion chamber, and nozzle. The TCA is not an entire engine. Instead, it is where the propellants are mixed, combusted, and exhausted. The objective is to test different propellant injector configurations to determine which configuration will maximize performance and efficiency. Most of the main engine can be simulated with the test stand itself.

This testing took place on the E-1 Test Stand, Cell 1, configured for the new test in the beginning of 2021. The hot fire series began March 30 and lasted until the final testing day July 20.

“Commercial projects are fast-paced, help us learn new things, and give us an opportunity to help with the commercialization of space,” said Paul Rydeen, NASA project manager at Stennis.

When the Virgin Orbit team became familiar with the testing process, they were able to establish a rhythm that led them to success, allowing them to accomplish as many as four tests per day. Each of these tests would typically last a total duration of 12.1 seconds. With 87 hot fire tests performed over the testing period, the combined test time totaled 974.391 seconds.

“Virgin Orbit has been working with the Stennis test team since late 2020 on a variety of complex engine related activities,” said Tom Alexiou, program manager for Virgin Orbit’s evolved launch vehicle.  “Their support of us has been exemplary in all facets of the program. We continue to maintain an excellent working relationship and look forward to our latest N3.2 engine development testing program that will take us into 2022.”

The testing at Stennis directly contributed to the design changes appearing on the Newton 3 engine – a first stage engine that uses Rocket Propellent-1 and liquid oxygen as propellants. A typical run time for this stage is three minutes with a max speed of 8,000 miles-per-hour. Virgin Orbit uses Newton 3 to propel the LauncherOne rocket, a two-stage, orbital, air-launched vehicle carried to the upper atmosphere and released over the Pacific Ocean. This rocket holds the title of the first orbital class, air-launched, liquid-fueled rocket to successfully reach space.