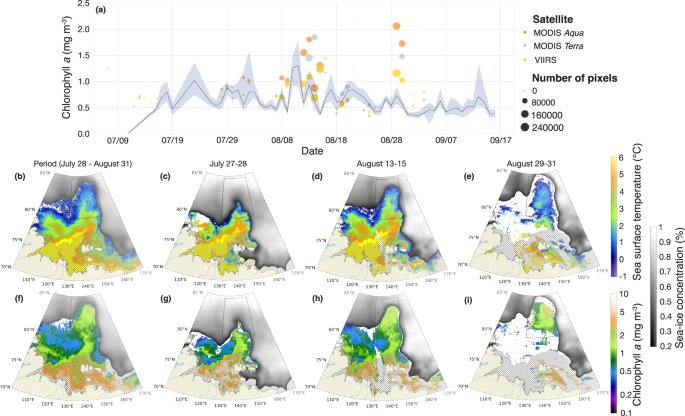 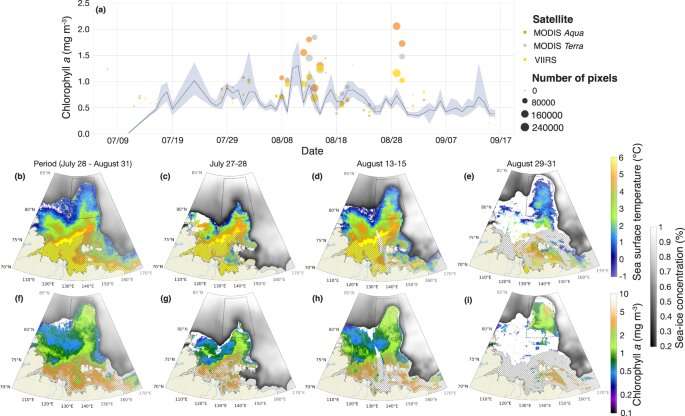 Large summer phytoplankton bloom near the North Pole (eastern Eurasian Basin) in summer 2014. Satellite-derived mean chlorophyll a concentration within the region of the bloom (28–155°E, 80–85°N) during the summer of 2014 (a). Dot color represents which satellite sensor (MODIS Aqua, Terra, or VIIRS) is used. Dot size is relative to the number of observations obtained (i.e., pixels). The blue line is the climatological daily average of surface chlorophyll a concentration over the period 2003–2019 (except 2014) with the shading envelope corresponding to the interval between the first and third quartiles. Sea-ice concentration and sea surface temperature, for the full period July 28–August 31 (b), and for the three time periods July 27–28, August 13 –15, and August 29–31 (c–e, respectively). Sea-ice concentration and chlorophyll a concentration, for the same dates as b–e, shown in panels f–i. For b–i: location of the bloom is within the dotted box (28–155°E, 80–85°N) and the continental shelf (bottom depth less than 50 m) is shown by cross-hatching. Credit: Mathieu Ardyna et al, Communications Earth & Environment (2022). DOI: 10.1038/s43247-022-00511-9

Smoke from a Siberian wildfire may have transported enough nitrogen to parts of the Arctic Ocean to amplify a phytoplankton bloom, according to new research from North Carolina State University and the International Research Laboratory Takuvik (CNRS/Laval University) in Canada. The work, which appears in Communications Earth & Environment, sheds light on some potential ecological effects from Northern Hemisphere wildfires, particularly as these fires become larger, longer and more intense.

In the summer of 2014, satellite imagery detected a larger than normal algal bloom in the Laptev Sea, located in the Arctic Ocean approximately 850 kilometers (528 miles) south of the North Pole.

“For a bloom that large to occur, the area would need a substantial influx of new nitrogen supply, as the Arctic Ocean is nitrogen-depleted,” says Douglas Hamilton, assistant professor of marine, earth and atmospheric sciences at NC State and co-first author of a paper describing the work. Hamilton was formerly a research associate at Cornell University, where the research was conducted. “So we needed to figure out where that nitrogen was coming from.”

First, the researchers looked at the “usual suspects” for nitrogen input, such as sea ice melt, river discharge and ocean upwelling, but didn’t find anything that would account for the amount of nitrogen necessary for the bloom to occur.

But during that same time period, exceptionally large wildfires in Siberia, Russia, located directly upwind of the bloom, had burned approximately 1.5 million hectares (or about 3.5 million acres) of land.

So the researchers turned their attention to atmospheric composition. They used the Community Earth System Model (CESM), a computer model that can simulate what happens to emissions from natural and human sources as they enter and leave the atmosphere. The model was fed information about wind, temperature and atmospheric composition—including the composition of wildfire smoke—from the time period in question.

The model simulations showed that during late July and August of 2014—when the bloom was detected and the Siberian wildfire was burning—nitrogen deposition from the atmosphere was almost double that of the preceding and following years.

“The wildfires were located in rapidly warming boreal regions, which have a lot of peat in the thawing permafrost,” Hamilton says. “Peat is very nitrogen rich and the smoke from the burning peat was hypothesized as the most likely source of much of the additional nitrogen.”

“We’ve known that fires can impact phytoplankton blooms, though it is unexpected to see something like this in the Arctic Ocean,” says Mathieu Ardyna, co-first author and CNRS researcher at the International Research Laboratory Takuvik (CNRS/Laval University). “Most likely, since fires are locality-specific and difficult to predict, blooms like this won’t be the norm—but when these wildfires do occur the nutrients they bring in could lead to sustained or multiple blooms.”

The researchers’ next steps could include reviewing the historical satellite record and further characterizing the chemical composition of the particles within the smoke to get a clearer picture of how wildfires like these might impact different ecosystems.

“A one-off bloom like this won’t change ecosystem structure, but both Siberia and high arctic Canada are getting more wildfires,” Hamilton says. “So it may be interesting to explore potential downstream effects if fire activity and nutrient supply remain high.”

Citation:
Wildfire smoke may have amplified Arctic phytoplankton bloom (2022, September 19)
retrieved 20 September 2022
from https://phys.org/news/2022-09-wildfire-amplified-arctic-phytoplankton-bloom.html
This document is subject to copyright. Apart from any fair dealing for the purpose of private study or research, no
part may be reproduced without the written permission. The content is provided for information purposes only.