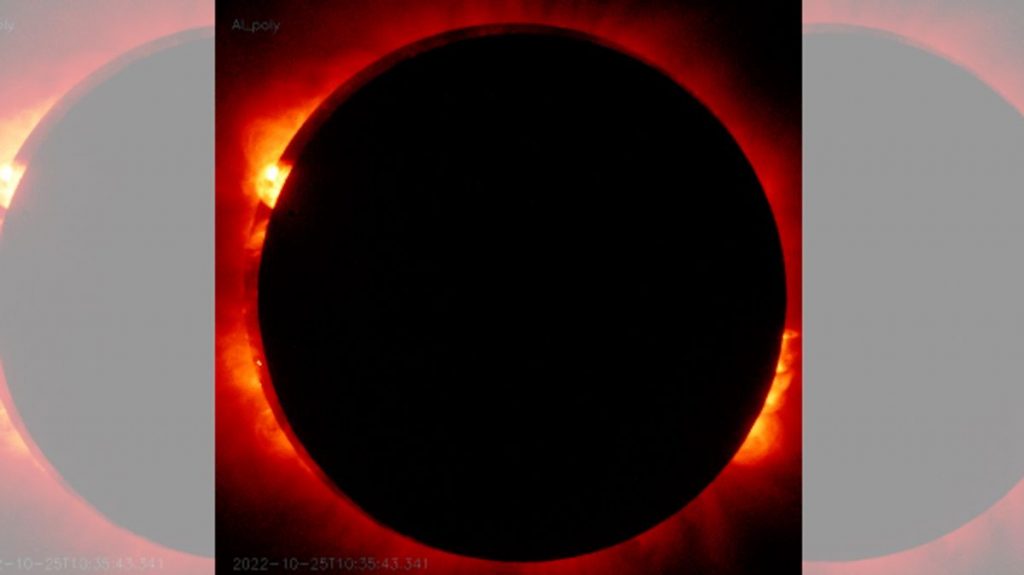 On Oct. 25, the moon’s shadow swooped in front of the sun during the last partial solar eclipse of 2022. Sky watchers in Europe, the Middle East, and parts of Africa and Asia saw anywhere from 15% to 85% of the sun’s surface obscured by the moon, resulting in some truly spooky eclipse views in the pre-Halloween sky. As for the rest of the world? Nothing to see but an average, blazing-bright sun that was secretly smiling at us with its chaotic magnetic activity.

If you were one of the many Earthlings who missed the eclipse, NASA has you covered. Using data from the Hinode satellite — a solar observatory jointly managed by space agencies in the U.S., Japan, the U.K. and Europe — NASA has shared a video of the eclipse as seen from space. You can watch it now — and see the entire eclipse play out in just 30 seconds — above or on NASA’s website.

As Hinode orbited Earth, it caught three different views of the eclipse over the course of about three hours. Seen through Hinode’s X-ray telescope, the moon appears completely black, while the sun blazes bright red in the background.

Related: Get ready, the next great North American total solar eclipse is 2 years from today

—Why does the moon turn red during a total lunar eclipse?

—Dazzling photos of the solar eclipse from Antarctica

Unlike the view from Earth, Hinode’s orbiting vantage point allowed it to see not just a partial eclipse, but also an annular eclipse — that is, an eclipse in which the moon covers the center of the sun, allowing only a thin ring of fire to peek around the edges. (This ring of fire is also called an annulus, taken from the Latin word for “little ring.”)

Those aching to see an annular eclipse from Earth need only wait another year; the next one will be visible Oct. 13, 2023, to viewers in the western United States, as well as parts of Central America, Colombia and Brazil, according to Timeanddate.com.

The Hinode satellite launched out of Japan in September, 2006. The satellite’s primary mission is to study the sun’s magnetic field, in order to understand the mechanisms that drive large solar eruptions such as solar flares and coronal mass ejections, according to NASA.