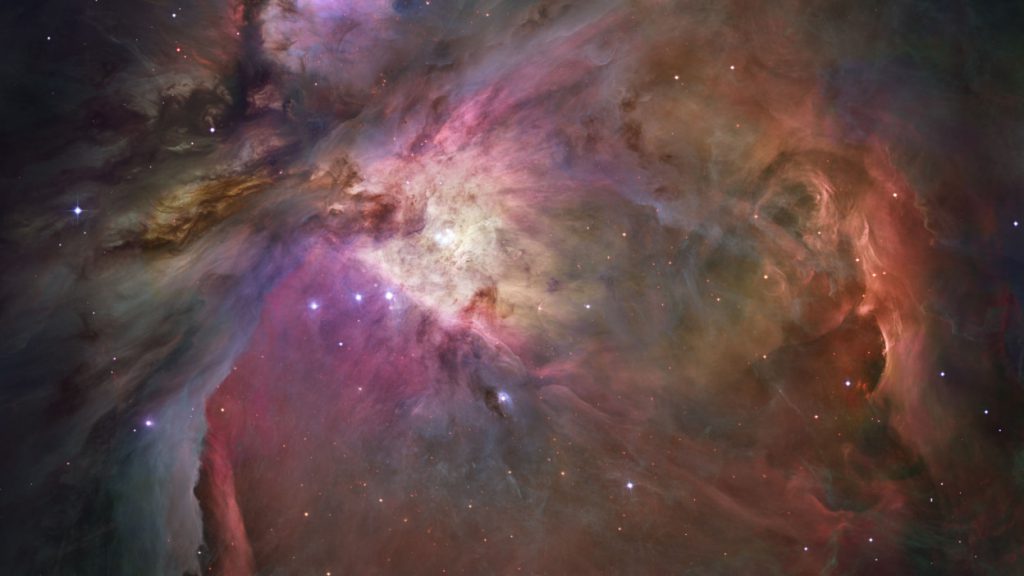 The Orion Nebula, a mere 1,500 light-years from Earth, is the closest neonatal unit for baby stars.

And on February nights, it’s easy to take a peek in on the stellar nursery with binoculars, a telescope, or even the naked eye.

As the constellation Orion looms in the south between 8 and 9 p.m., find the three stars forming the “hunter’s belt,” then look below the belt to locate the stars forming his “sword.”

Ancient Greeks believed an arrangement of stars in the sky looked like a giant hunter, Orion, with a sword attached to his belt. Credit: NASA / STScI

See something kind of fuzzy in the center of the sword’s line? That’s the nebula, a region where new stars are forming. The fuzz is a giant cloud of dust and gas, mostly hydrogen and helium.

Star baby-making happens when gravity pulls together tufts of the dust and gas, with the clouds growing ever larger. Eventually, the clouds get so big, they collapse from their own gravity.

So intense, in fact, the heated center of the material starts to form a star.

NASA says the Orion Nebula is visible to the naked eye in relatively dark skies and looks like a faint haze with binoculars. But if you have access to a telescope or local skywatching club, take advantage.

The nebula includes young stars and pillars of dense gas that may be homes for more newborn stars. At the center are four whoppers, known as the Trapezium. Ultraviolet light from those four stars is whittling a cavity in the star nursery, stunting the growth of hundreds of smaller stars. Close to the Trapezium are little twinklers still young enough to have disks called “proplyds,” the building blocks of solar systems.

This month will also be an ideal time for planet-gazing.

Jupiter is the only planet visible after sunset with the naked eye in February. Once Jupiter makes its exit at the end of the month, planets will be absent from the night sky, at least to unaided eyes, until August. At that time, Saturn will start rising in the east around sunset.

Venus forms a trio with the moon and Mars in the morning before sunrise Feb. 26. Credit: NASA/JPL-Caltechhttps://7ce3ba4718c335a1f94cb51534d6b6f7.safeframe.googlesyndication.com/safeframe/1-0-38/html/container.html

Venus also will be at its brightest for the year in the early morning hours by the middle of the month. In a crescent silhouette, it rises with Mars around 4 a.m. and can be viewed low in the southeast until sunrise. Venus, nicknamed the “evening star,” is the brightest of all the planets in the solar system because of its highly reflective clouds.

Don’t forget to mark your calendars for Feb. 26, when Venus forms a trio with the moon and Mars in the morning.