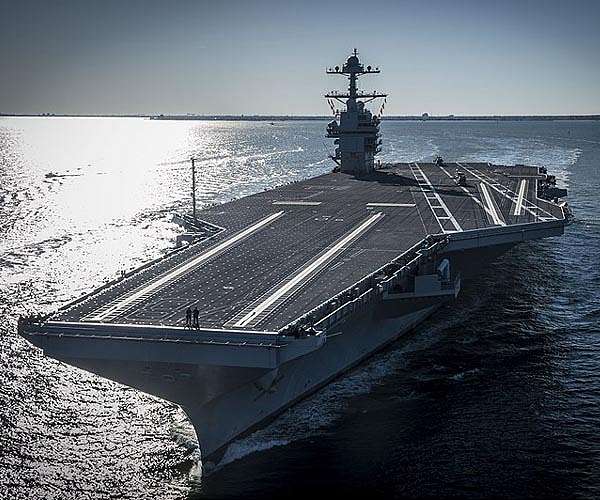 The US Navy’s newest aircraft carrier embarked on its maiden deployment Tuesday, a milestone for a ship that has suffered problems with some of the advanced technologies it carries.

The USS Gerald R. Ford — which cost more than $13 billion — will work with countries including Canada, France and Germany during a deployment that will include training on air defense, anti-submarine warfare and amphibious operations.

A live video on a US Navy Facebook page showed tugboats moving the gray-painted ship away from the pier at Naval Station Norfolk in Virginia.

The ship’s deployment will “demonstrate its unmatched, multi-domain, full-spectrum lethality in the Atlantic,” Admiral Daryl Caudle said in a statement ahead of the ship’s departure.

The deployment will involve 9,000 people, 20 ships and 60 aircraft from nine different countries, the US Navy said, without providing a breakdown by nation.

The ship — named for the 38th US president — requires hundreds fewer crew members to operate than previous carriers and is designed to be able to carry futuristic energy weapons that are still under development.

A key improvement over previous carriers is supposed to be the rate at which it can launch and retrieve aircraft, but there have been issues with the systems involved, according to a June 2022 report to Congress.

“The Navy anticipates achieving reliability goals in the 2030s,” the Government Accountability Office report said of the carrier’s Electromagnetic Aircraft Launch System and Advanced Arresting Gear, adding that reliability issues could “prevent the ship from demonstrating one of its key requirements — rapidly deploying aircraft.”

The vessel’s weapons elevators — which move missiles and bombs from its magazines to the deck so they can be loaded onto planes — have also suffered problems.

“The ship’s first deployment was delayed by a need to complete work on the ship’s weapons elevators and correct other technical problems,” the Congressional Research Service said in a report updated in August, adding that the final elevator was tested and certified in late 2021.

As the Gerald R. Ford goes to sea and with other similar carriers in the works, there is debate over whether new weapons such as anti-ship ballistic missiles have rendered such ships obsolete, or will do so in the future.

Mackenzie Eaglen, a senior fellow and defense expert at the American Enterprise Institute, argues that their time is far from over due to the deterrent role they play.

“The US military — most visibly through US Navy… carrier strike groups — first deters bad actors and messy wars. If deterrence is lost, then we have a lot of equipment and bases that are vulnerable in the next conflict,” Eaglen said.

“As the US (seemingly constantly) debates the utility of the carrier, other nations are busy heavily investing in aircraft carriers — from India, China, France, UK, Australia and Italy — which speaks to the ship’s continued utility both in peacetime and war,” she added.

Naval Warfare in the 21st Century


DARPA is moving into Phase 2 of the No Manning Required Ship (NOMARS) program, which seeks to build and demonstrate a revolutionary new medium unmanned surface vessel (MUSV) that can go to sea and perform missions with unprecedented reliability and availability, while carrying a significant payload. The agency selected Serco Inc.’s design to move forward at the conclusion of Phase 1.

NOMARS took a clean-sheet approach to ship design, holding firmly to the requirement that there will never be a hum … read more