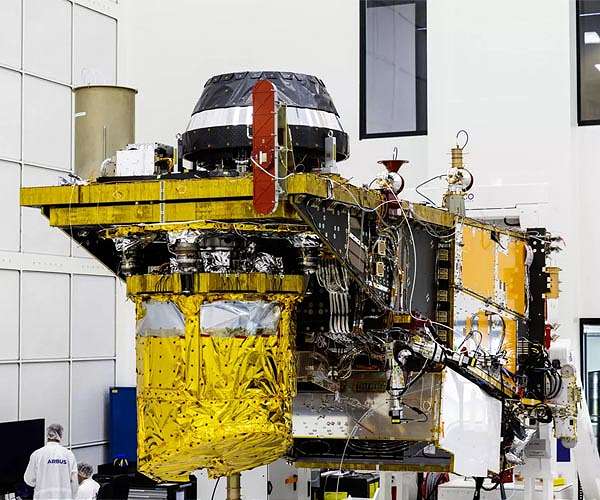 The development of Europe’s second generation polar-orbiting weather satellites has reached another decisive milestone with the installation of the Ice Cloud Imager Instrument (ICI) onto the MetOp-SG-B satellite. The novel sensor has now been successfully integrated at Airbus’ Satellite Integration Centre in Friedrichshafen, Germany. ICI is one of the five instruments on board this next generation weather satellite set to improve regional and global forecasting.

This instrument, built by Airbus in Madrid, is the first operational sensor covering submillimetre wavelengths for weather and climate observations from space.

“We are talking about an unprecedented technological development, which represents an incredible challenge, as it is the first operational mission with a Front-End at such a high frequency,” said Luis Guerra, Head of Airbus Space Systems in Spain. “Its radio frequency and thermo-mechanical design are pure state of the art and will deliver greater precision than ever before.”

Why do we need to understand ice clouds?

Ice clouds strongly contribute to the heating of the atmosphere by trapping thermal radiation released by Earth. At the same time, they also reflect sunlight back into space to keep Earth cool. For this reason, understanding how clouds impact the temperature of the atmosphere is essential. ICI will measure how much radiation coming from the surface a specific ice cloud allows to pass through.

To date, researchers have only been able to gauge this radiation in certain segments of the electromagnetic spectrum. ICI will penetrate this unexplored area and record radiation in the submillimetre range, contributing to weather forecasting, hydrology, climate monitoring, detection and qualification of snowfall, and water vapour profiles.

ICI’s data will enhance the ability of numerical weather prediction (NWP) centres to produce global and regional models with information on clouds. Clouds are currently under-represented in models despite their importance for accurate weather forecasting. ICI will therefore provide meteorological and climate communities with an important new data source.

How does it work?

Installed on the top of the MetOp-SG-B satellite, the ICI instrument is a conical scanning millimetre/submillimetre-wave radiometer that spins around at 1.333?Hz (i.e. 45 r.p.m.) to passively gather information about the bulk mass of the clouds below it. It will use its radiometer to take measurements of ice water paths, effective ice radius and cloud altitude. It will also provide a vertical profile of moisture and vertical profiles of hydrometeors (like cloud ice and snow), as well as water vapour.

A new era in weather and climate monitoring

MetOp-SG is a continuation of the successful MetOp first generation series of satellites, which currently provide critical meteorological observations from polar orbit. These valuable contributions will be enhanced and provided by the MetOp-SG satellites from mid-2020 up to the 2040s.

MetOp-SG consists of two, parallel series of satellites (A and B), with three in each series. The A series, being built at Airbus in Toulouse, carries atmospheric sounders and optical/infrared imagers, while the B series, under construction at Friedrichshafen in southern Germany, focuses on microwaves. MetOp-SG is a cooperative undertaking between the European Space Agency (ESA) and EUMETSAT, the European Organisation for the Exploitation of Meteorological Satellites.

The first launch of the MetOp-SG mission is scheduled for 2025 after completion of integration and satellite level testing. The nominal operational lifetime of each of the three MetOp-SG satellites is 7.5 years, ensuring full operational coverage over a 21-year period. 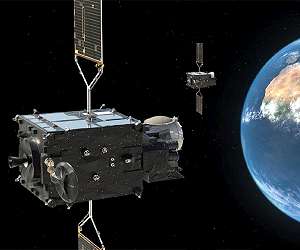 
Before Europe’s first Meteosat Third Generation Imager leaves the south of France at the end of the month aboard a ship bound for French Guiana, this remarkable new weather satellite has been taking centre stage at Thales Alenia Space’s facilities in Cannes.

The satellite is in its very last stages of being checked and readied for shipment to Europe’s Spaceport in Kourou, French Guiana.