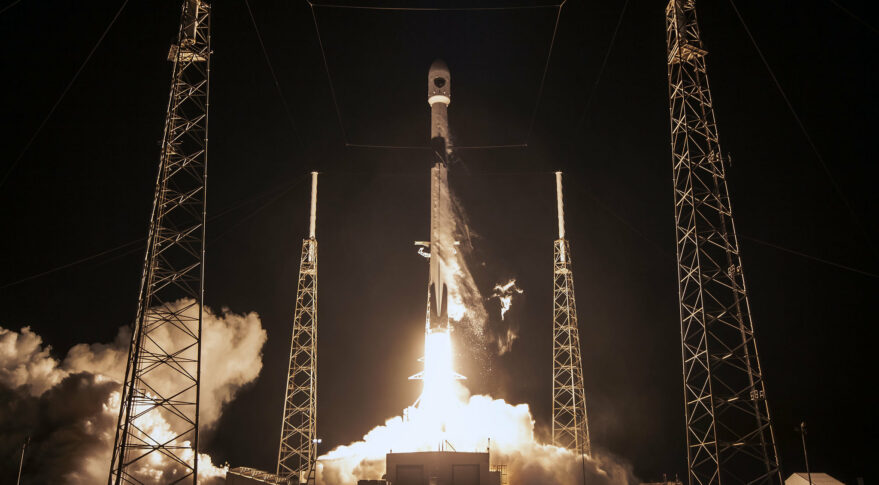 WASHINGTON — The upcoming SpaceX launch of a GPS 3 satellite scheduled for June 17 will be the first national security space mission to use a refurbished Falcon 9 booster.  The U.S. Space Force initially ordered an expendable rocket but agreed to the switch with a caveat: the reused booster had to be the one that flew another GPS 3 satellite to orbit last November.

A Space Force official told reporters June 14 that this requirement is just for this mission as the military gets more comfortable with reusability. In the future SpaceX will be able to bid for national security launch contracts “with no restrictions on reusability,” said Walter Lauderdale, deputy mission director of the Space and Missile Systems Center’s Launch Enterprise.

“Later this year we’ll work with them on what boosters are available. Not just those flown for national security launch, we’re open to using others,” Lauderdale said during a conference call with reporters.

Lauderdale said it’s taken SMC’s Launch Enterprise several years to get to this point after working with SpaceX and gaining a better understanding of how its fleet operates.

SpaceX’s first mission under the National Security Space Launch program in December 2018 — GPS 3 SV-01 — flew on an expendable rocket. For the second and third GPS 3 launches in June and November 2020 (GPS 3 SV-03 and SV-04), the Space Force allowed SpaceX to recover the boosters. For the next two GPS 3 missions, GPS 3 SV-05 and SV-06, the company will be able to fly reused boosters and recover them.

SpaceX received a bulk contract worth $290.5 million to launch GPS 3 SV-04, SV-05 and SV-06. After agreeing to booster recovery and reuse, the price was reduced by $64 million over the three missions, Lauderdale said.

For the launch of SV-06 SpaceX will be allowed to offer a booster that has flown more than twice, said Lauderdale.

There are still four more GPS 3 launch contracts to be awarded under Phase 2 of the National Security Space Launch program. SpaceX and United Launch Alliance are the two launch providers selected for Phase 2 for a five-year period from 2022 to 2027.  Under the terms of the contract, the Space Force has to give ULA 60 percent of the missions over the five years and SpaceX 40 percent.

Given SpaceX’s win streak with GPS missions, the company is likely to launch more GPS satellites in the coming years. SpaceX got five of the six GPS 3 launches awarded over the past four years. ULA in 2019 launched a GPS satellite on the final flight of the Delta 4 Medium rocket before it retired the vehicle.

Lauderdale said Phase 2 launch awards don’t set reusability limits. “We have to continue to look beyond two or three, he said. “Phase 2 doesn’t specify a count.” There are no restrictions on reused payload fairings either, he said.

The next GPS contract up for award is the seventh GPS 3 satellite (SV-07), one of five missions funded in the Space Force’s $1.4 billion budget request for national security launch services for fiscal year 2022, a Space and Missile Systems Center spokesman confirmed.

The other three — GPS 3 SV-08, SV-09 and SV-10 — “are currently being tracked as future launch service requirements, the spokesman said.

GPS 3 satellites are made by Lockheed Martin. The company in 2008 got a contract to develop and produce 10 satellites, four of which are in orbit. The last four that have not been awarded launches yet will be completed long before they’re expected to fly to orbit. Because of the lag time between delivery of the satellites and their projected launches, these last four will be kept in storage at Lockheed Martin’s facility in Colorado.