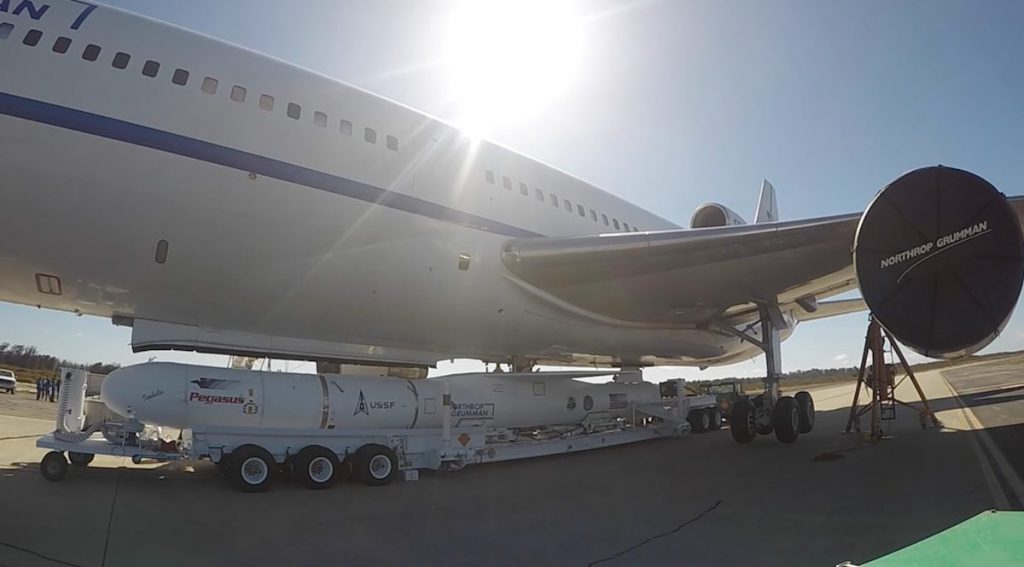 A Northrop Grumman Pegasus rocket dropped from the belly of a carrier jet over the Pacific Ocean early Sunday and streaked into orbit with a small U.S. military space surveillance satellite named Odyssey, completing a successful rapid launch exercise in partnership with a secretive new Space Force special projects unit.

The mission’s goal was to demonstrate how the military can develop and launch satellites on faster timescales. The small spacecraft, which a Space Force spokesperson said is named Odyssey, was buttoned up inside the nose cone of a Pegasus XL rocket.

The mission, known as TacRL-2, was part of the Space Force’s “Tactically Responsive Launch” program.

Mounted on the belly of an L-1011 carrier aircraft, the 53,000-pound (24-metric ton) Pegasus XL rocket departed Vandenberg Space Force Base on California’s Central Coast about an hour before launch.

The L-1011 aircraft, named “Stargazer,” flew to the Pegasus drop zone about 150 miles (250 kilometers) off the California coast and lined up on the launch trajectory heading south. Two pilots, a flight engineer, and two launch console operators ensured all systems were “go” for release of the Pegasus.

After a five-second free fall, the Pegasus ignited its solid-fueled first stage Orion 50S XL motor to begin the climb into space.

The first stage, fitted with a wing and steering fins, generated more than 160,000 pounds of thrust and fired more than a minute before burning out. The Pegasus then jettisoned its first stage and fired its Orion 50 XL and Orion 38 second and third stage motors to reach orbit with the Odyssey satellite.

Northrop Grumman and the Space Force did not provide a live webcast of the mission.

A statement released by Space Launch Delta 30, formerly the 30th Space Wing, at Vandenberg Space Force Base less than an hour after launch confirmed the mission was successful.

The Space Force established the Tactically Responsive Launch Program to demonstrate the military could “call up” a launch provider and deploy a small satellite into orbit within 21 days.

“Our mission partners and Delta 30 team demonstrated the Space Force tactical response capability to launch small satellite payloads within three weeks,” said Col. Robert Long, commander of Space Launch Delta 30, in a statement. “It takes a resilient team providing agile services and responsiveness to our launch customers for mission success. I want to thank our launch partners and our Delta 30 team for their efforts providing space access for this important tactical response demonstration.”

Military officials have released few details about the Odyssey satellite.

Officials did not reveal the mission’s target orbit, but airspace warning notices suggested the Pegasus XL rocket likely headed for a sun-synchronous orbit with an inclination of about 98 degrees.

The Odyssey spacecraft was built by a new organization called “Space Safari,” modeled after the Air Force’s secretive “Big Safari” program that modifies aircraft for special missions, according to Gen. Jay Raymond, the Space Force’s chief of space operations.

“The thing that concerns me is our ability to go fast, so everything that we’re doing in the Space Force is designed to allow us to move at speed,” Raymond said Thursday in a virtual discussion hosted by the Council on Foreign Relations. “So about a year ago, I challenged our acquisition organization to develop a capability in tactical timelines, integrated it onto a launch vehicle and launch it, and let’s see how fast we can do it.

“So we stood up an organization called Space Safari, modeled kind of after what the Air Force has done with their Big Safari program, and in less than a year, they took satellite components off the self, married it up with a satellite bus that was off the shelf, put it together, and it’s a space domain awareness satellite.”

Raymond said it takes about five years to build a GPS navigation satellite.

“That’s not good enough,” he said.

Building and launching a spacecraft in less than a year could pave the way for the Space Force to quickly deploy a satellite to respond to an emerging threat, or to replace a critical satellite in wartime.

“This is a first experiment, and I’m proud of the team,” Raymond said. “It was less than year from when I gave them the challenge to a launch.”

Once the satellite was built, the Space Force kept in storage until May, when officials called it up for launch.

“We kind of had it on the shelf. We just gave them a 21 day call-up, saying get ready to launch in 21 days,” Raymond said

The Space Force awarded Northrop Grumman a $28.1 million contract for the TacRL-2 launch last July. The Defense Department awarded the task order through the Orbital Services Program-4 contract, which covers launch services for small and medium-size military satellites through 2028.

Northrop Grumman had the Pegasus XL rocket for the TacRL-2 mission in storage. It was one of two Pegasus rockets manufactured for Stratolaunch, a company founded by the late billionaire Paul Allen. Stratolaunch developed the largest airplane ever built, and purchased two Pegasus rockets to launch from the giant aircraft, then planned to work on its own launch vehicle.

But Stratolaunch’s progress slowed after Allen’s death in 2018, and the company abandoned plans to launch Pegasus rockets. Instead, Stratolaunch said last year it is working on a hypersonic test vehicle.

Stratolaunch’s airplane successfully flew for the first time in 2019, and completed a second test flight in April.

After Stratolaunch’s plans changed, Northrop Grumman reacquired the near-complete Pegasus rockets from Stratolaunch to offer to other customers.

Kurt Eberly, director of Northrop Grumman’s launch vehicles division, said the Pegasus team and the Space Force worked out how to execute the TacRL-2 mission in the months leading up to the call-up May 22, including agreements with the Western Range at Vandenberg on flight safety parameters. But some specifics, such as the target orbit and trajectory, were not known to the Pegasus team until 21 days ago.

“I would say it was very successful,” he said in an interview. “What we just did with the space vehicle team is really hard. We got the call-up 21 days ago on a Saturday evening. Our team just swung into action. In that call-up, we got direction on the trajectory and where to launch to, and some other particulars. So our team had to adjust to all that.”

The Odyssey satellite arrived at Vandenberg within the last three weeks. Technicians encapsulated the spacecraft inside the Pegasus payload fairing before mating it to the rocket.

Developed commercially by Orbital Sciences, now part of Northrop Grumman, the Pegasus rocket flew its 45th satellite delivery mission. Since the rocket’s debut in 1990, Pegasus missions have been staged from Vandenberg, Edwards Air Force Base, Cape Canaveral, Wallops Island in Virginia, Kwajalein Atoll in the Pacific Ocean, and the Canary Islands.

The most recent Pegasus launch staged from Vandenberg was in 2013.

“It’s the first time in eight years we’ve had a Pegasus launch from here on the Western Range, so that’s exciting to do something we don’t get to do very often,” said Lt. Col. Jeremy Hromsco, commander of the 30th Operational Support Squadron at Vandenberg.

NASA paid $56.3 million to launch a research satellite on the previous Pegasus rocket flight before TacRL-2.

That mission was delayed more than two years due to technical problems with the Pegasus. NASA decided in 2019 to launch a future scientific satellite aboard a SpaceX Falcon 9 rocket, a much larger launcher than the Pegasus.

The Imaging X-ray Polarimetry Explorer, or IXPE, was originally designed to launch on a Pegasus rocket. SpaceX’s Falcon 9 is vastly oversized for the IXPE satellite, but it has the ability to launch the small payload into a unique equatorial orbit from Cape Canaveral.

And SpaceX can do the launch for $50.3 million, undercutting the previous publicly-available price for a Pegasus. The $28 million contract for the TacRL-2 mission is half the price NASA paid for the most recent Pegasus mission in 2019.

Eberly said the Pegasus rocket, designed by Orbital Sciences in the 1980s as the first privately-developed satellite launcher, still has a role to play in the launch industry.

“Solid rocket motor propulsion is maybe a little more expensive than some of the low-priced new entrants that we see come along,” he said. “We understand that.”

The benefit of solid-fueled launchers, according to Eberly, is they are inherently responsive.

“They are able to be stored for many, many years, and then are ready to launch at a moment’s notice,” Eberly said. “Solid rocket motor technology can enable very short call-up times and responsiveness. What it requires is to get all the work done up front, and get ready, and get the plan done.’

Northrop Grumman has one more Pegasus XL rocket in the hangar, and could build more. So far, the Pegasus doesn’t have a customer beyond Sunday’s TacRL-2 mission.

The Space Force issued a request for proposals earlier this year for two additional tactically responsive launch missions — TacRL-3 and 4 — for flights in 2022 and 2023.

“If there is a need to shorten up these call-up times, then solids could have a place to serve in that role,” he said. “In addition to the vehicles launched from the ground, an air-launched solid then gives you flexibility in the basing and the drop point, and allowing you to get to different orbits more quickly than you could get to if you had to launch from the ground at a fixed launch point.

“Maybe there’s a role there (for Pegasus),” Eberly said before Sunday’s launch. “So we’re going to do our best job here on TacRL-2 , and put our best foot forward … And then after the mission, we’ll see what comes out of it.”