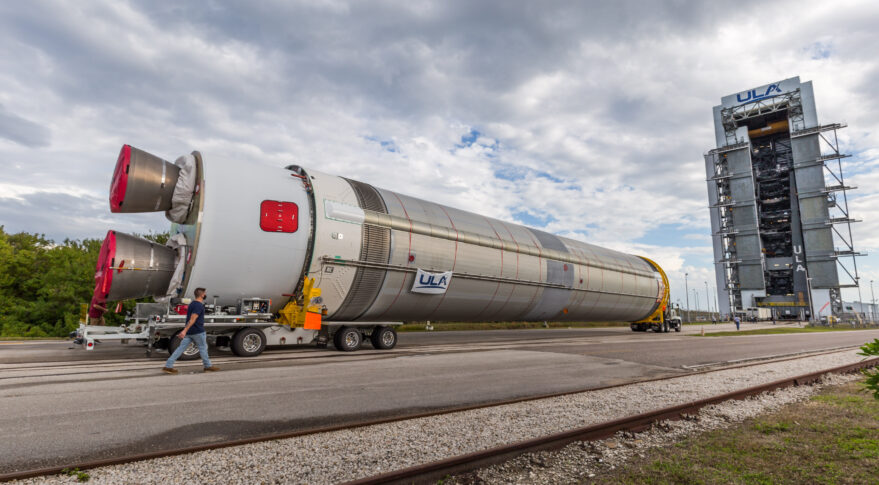 Bruno: ‘It’s taking us longer to move through this test program. And the same is true on the production part of this’

WASHINGTON — United Launch Alliance underestimated the challenges Blue Origin would face in the development, testing and manufacturing of the BE-4 rocket engine, ULA’s CEO Tory Bruno said Aug. 5. The engine program is years behind schedule, he said, but the BE-4 so far is performing well in tests and fully assembled flight engines should be delivered within months.

“I expect that I will receive flight engines before the end of the year,” Bruno said in an interview with SpaceNews.

Two BE-4 engines will power the first stage of ULA’s new rocket, Vulcan Centaur. ULA signed an agreement with Blue Origin in 2014 to jointly fund the development of the BE-4 and in 2015 announced it would build Vulcan as its next-generation rocket to replace the Atlas 5 and the Delta 4.

Blue Origin in 2015 proclaimed that engines would be ready by 2017. Bruno said everything in the BE-4 program has taken far longer than planned.

“I’m not going to kid you: the engines are late,” Bruno said.

“And why is that happening? It’s happening because the testing is more complicated than they anticipated. And because they allowed themselves, we allowed ourselves as a program, to have fewer test assets to work with than we originally planned,” he added.

The combination of all these issues is “causing us to take longer to move through this test program. And the same is true on the production part of this,” said Bruno.

The pre-qualification program will be followed by more rigorous qualification testing, both of which are happening in parallel to the fabrication of the flight engines. There is some risk involved in this approach but “no major issues” have emerged so far, he said.

The two flight engines may or may not be finished before the qualification program is finished, Bruno said. “We’ll take them as soon as they’re available, and we’ll start integrating them into a flight booster” at ULA’s rocket factory in Decatur, Alabama.

During the pre-qualification testing, engineers are pushing the engine “above and beyond requirements,” he said. “That means running for longer durations, or at higher power levels. It’s just a good thing to do when you have the opportunity.”

“The thrust levels are where we want them, the efficiency of the engine [the ISP or specific impulse] is higher than we expected. The engine has been run at its minimum power level, it’s been run above its maximum power level,” he added. “We have many thousands of seconds across several engines so we’re feeling very good about the design of our engine.”

During a new engine development it’s expected that tweaks might be needed but “hopefully what you don’t find are big problems with the engine that require any kind of significant redesign,” Bruno said. “We haven’t had any of those big things since we’ve been in our pre qualification testing. We’re deciding if we want to make minor adjustments before we go into formal qualification.”

An unspecified number of BE-4 engines are going through pre-qualification and several more will be used for the formal qualification, Bruno said. The first pair of flight engines will not see qualification testing but will be hot fired before they are delivered to the rocket factory.

Testing and manufacturing “literally the same article” is more complicated than Blue Origin had planned or anticipated, said Bruno. “It’s just taking them longer to get through it, to actually build those engines for us as well as finish up the testing.”

The flight engines will be mated with a Vulcan booster that is currently at ULA’s facility in Cape Canaveral, Florida. They’ll get fired one more time on the pad before the first launch, Bruno said. “This flight readiness firing is just a one-time event. It’s like a qualification test for the whole booster” before it goes into the vertical integration facility where the upper stage and payload are stacked.

What’s at stake for ULA

The success of Vulcan is critical to the future of ULA. The company won one of two contracts (SpaceX won the other) the U.S. Space Force awarded in August 2020 for the National Security Space Launch Phase 2 Launch Services Procurement.

The Space Force invested nearly $1 billion in the development of Vulcan and also needs it to succeed because the law bans DoD from procuring launches on Atlas 5 beyond 2022. Congress passed that law in 2016 due to geopolitical tensions with Russia. The Atlas 5 booster uses the Russian RD-180 engine.

ULA’s first mission under the Phase 2 contract was expected to be flown by Vulcan in late 2022 but ULA asked to switch the mission to Atlas 5 as Vulcan would not be ready on time. The switch was allowed under the terms of the contract but stirred speculation about ULA’s and Blue Origin’s ability to bring Vulcan and BE-4 to fruition.

Vulcan needs to complete two non-NSSL orbital missions before it can be certified for national security launch. Besides the engine delays, another problem for ULA is that its first Vulcan customers — Astrobotic and Sierra Nevada Corp. — are late building their payloads. Bruno said he is confident these payloads will be ready next year but if they’re not, ULA will seek other customers to fly on Vulcan so it can be certified for its first NSSL mission in 2023.

Further concerns were raised by the Government Accountability Office in a June report that stated “A U.S. produced rocket engine under development for ULA’s Vulcan launch vehicle is experiencing technical challenges related to the igniter and booster capabilities required.”

Bruno said he was “dumbfounded” by GAO’s assessment that the engine igniter was a problem.

The igniter is not a technical challenge but a design issue, he said. Blue Origin is making the BE-4 for ULA and also to power its own heavy rocket New Glenn. About a year and a half ago, ULA and Blue Origin decided that the first BE-4s would be made with an igniter suitable for Vulcan but not for New Glenn, which has a reusable first stage and would need a different igniter for propulsive flyback.

‘We are in this together’

Bruno said the chatter about ULA considering ending its partnership with Blue Origin is just that — chatter.

“We have a solid relationship with our engine provider,” he said. “We know that we are in this together,” Bruno added. “There is no mission for our new rocket without engines, and there is no practical engine fabrication capability without us as a customer.”

“When we got into this partnership we anticipated that there would be a challenge in moving through a large complicated development program and then standing up a production line for flight hardware,” Bruno said. “It has been a little bit more challenging than certainly they anticipated, but it’s also been harder for them than we anticipated and that’s why it’s taking a bit more time.”

Bruno pushed back on suggestions that he is being protective of Blue Origin and glossing over the company’s lackluster performance on the engine program.

That’s not the case, he said. “You can’t cover things up, and if you’re trying to hide things they eventually come to light anyway and then you lose credibility, so I always prefer to be upfront and transparent. I’m not protecting them. They are professionals, and they can stand up for themselves.”