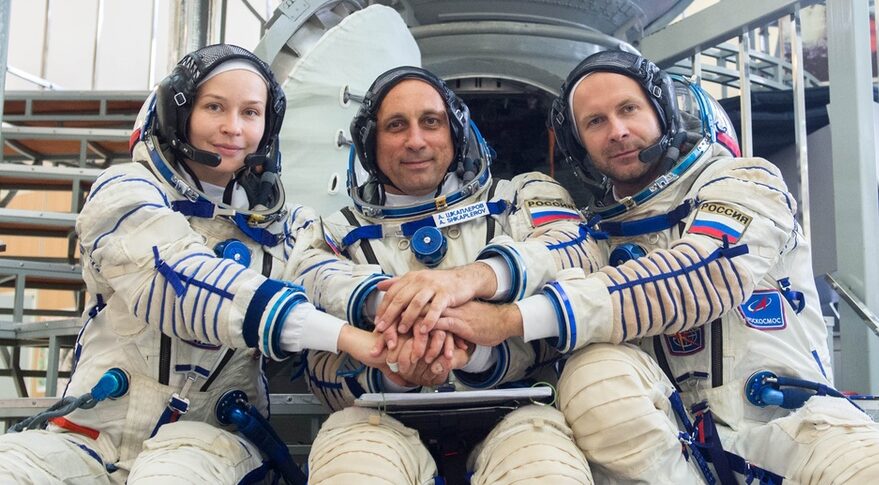 DOUGLAS, Isle of Man — New information has emerged about the Russian movie “The Challenge” planned to be filmed partly on the International Space Station in October.

During a recent funding pitch to the Russian Federal Fund for Social and Economic Support of Domestic Cinematography, executive producer Konstantin Ernst of the TV station First Channel and director Klim Shipenko, who plans to travel to the ISS, shared fresh details about the script and production logistics involved.

Shipenko revealed the script is still being fine-tuned, but the plot involves a cosmonaut who suffers a cardiac arrest during a spacewalk and, although he survives, he will require surgery to ensure he can handle the Soyuz return to Earth. A female cardiac surgeon, named Zhenya, has to be sent to the ISS to perform the procedure with only a few weeks to prepare for the trip.

Shipenko explained that he that he plans to shoot 35 to 40 minutes of screen time onboard the ISS during a 12-day stay, and he will have combine numerous roles, including director, camera operator and makeup artist.

The role of Zhenya will be played by either Yulia Peresild or Alyona Mordovina, who were chosen from around 3,000 actresses who submitted online applications for the part late last year. Both are currently being trained at the Yuri Gagarin Cosmonaut Training Center.

At present, Peresild is cast in the role and is assigned to fly with Shipenko and professional cosmonaut Anton Shkaplerov on the Soyuz MS-19 flight. Mordovina is both her creative understudy and backup cosmonaut, with a final decision on who will actually go to be made before final exams in September. Shipenko’s backup is his director of photography, Aleksey Dudin.

In his part of the funding pitch, Ernst revealed further members of the cast including
Russian cosmonauts Oleg Novitsky and Pyotr Dubrov, who have been in space since April. It was, perhaps, inevitable that they would be involved in some way, as Shipenko will clearly only be able to work with people who are on the ISS with him and the actress. It is not clear if NASA, ESA or JAXA astronauts who will be on the ISS when filming takes place will be invited to participate.

Ernst expressed disappointment at the lack of interest shown by the Russian media in the movie so far. However, very little official information has been revealed by his company, First Channel, and the four participants are forbidden to give interviews or share images of their activities on social media.

He did say that publicity would build up significantly during September, with First Channel broadcasting a documentary about the selection of the two actresses and a daily chat show being broadcast from Baikonur during the week before the launch.

The movie has already caused controversy in the Russian scientific community. Many observers, to whom the funding arrangements appear opaque, argue that vital resources are being diverted from space exploration and broader scientific activities to fund the movie. Sergei Krikalev, director of manned programs at the Russian space agency Roscosmos, and a six-time space flyer, was briefly removed from his post in June, apparently due to his opposition to the project. He was quickly reinstated after many protests, particularly from former cosmonauts.

The producers are seeking 400 million rubles ($5.4 million) from Cinematography Fund, suggesting they are still working on the final funding model for the movie. Around 20 other Russian movies also applied for support during the same event.

It is also notable that the website of the Yuri Gagarin Cosmonaut Training Center lists cosmonauts Sergei Korsakov and Dmitry Petelin as a “reserve” crew for Soyuz MS-19, suggesting that the movie flight is still not absolutely certain to take place as currently planned.