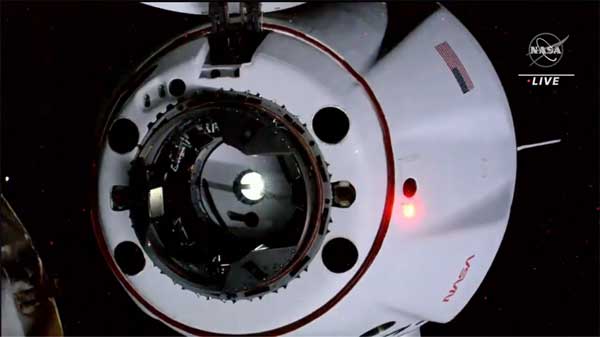 Following Dragon’s link up to the Harmony module, the crew aboard Dragon Endurance and the space station will begin conducting standard leak checks and pressurization between the spacecraft in preparation for hatch opening scheduled for 6:42 p.m.

Mann, Cassada, Wakata, and Kikina will join the Expedition 68 crew of NASA astronauts Bob Hines, Kjell Lindgren, Frank Rubio, and Jessica Watkins, Samantha Cristoforetti of ESA (European Space Agency), and Roscosmos cosmonauts Sergey Prokopyev and Dmitri Petelin. For a short time, the number of crew on the space station will increase to 11 people until Crew-4 departs.

NASA Television and the agency’s website are continuing to provide live continuous coverage of the agency’s SpaceX Crew-5 mission.

Learn more about station activities by following the space station blog, @space_station and @ISS_Research on Twitter, as well as the ISS Facebook and ISS Instagram accounts.

Get weekly video highlights at: http://jscfeatures.jsc.nasa.gov/videoupdate/

Get the latest from NASA delivered every week. Subscribe here: www.nasa.gov/subscribe