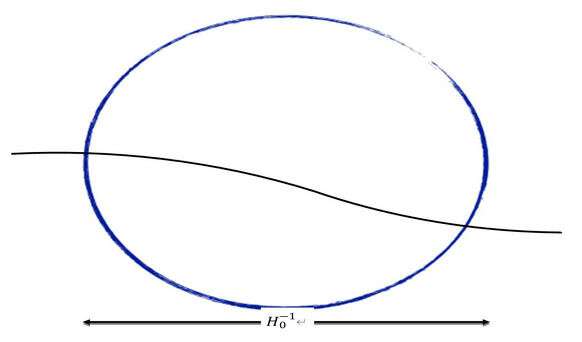 A research team led by Dr. Prabhakar Tiwari from the National Astronomical Observatories of Chinese Academy of Sciences (NAOC) has found that superhorizon modes could explain the observed Hubble tension.

Their findings were published in The Astrophysical Journal Letters on Jan. 18.

It is generally believed that the universe is isotropic and homogeneous on large distance scales. This hypothesis forms the basis of the standard Big Bang cosmology, called the cosmological principle (CP). CP does not follow from the laws of fundamental physics and has to be conjectured as an independent hypothesis.

The principle appears to be observationally valid to a good approximation. However, detailed observations reveal small but significant deviations from isotropy. The matter distribution is found to be higher in one direction compared to the others. Although a part of this can be attributed to our motion with respect to the cosmic frame of rest, this does not seem to be the whole story.

Interestingly, there is another anomalous observation. The observed Hubble constant, which is a measure of the rate at which the universe is expanding, also indicates that the local universe is special and not the same as the universe elsewhere.

Essentially, its value extracted from nearby galaxies seems to deviate from that measured globally. The latter would be the expected mean value over the entire universe. This deviation is called the Hubble tension and at present is one of the most pressing problems in cosmology.

It has been suggested that the observed deviations from isotropy can be explained if we consider cosmic perturbations or fluctuations with wavelengths larger than the size of the horizon. Horizon is the maximum distance light could have traveled since the origin of the universe. These are called superhorizon modes. It is assumed that for very large wavelengths, these modes are aligned along the same direction. Hence these do not obey CP.

“Miraculously, these modes can explain the observed Hubble tension,” said Dr. Prabhakar Tiwari. “The new finding connects the two most crucial issues of modern cosmology. Furthermore, as the redshift is a crucial observable in cosmology, its corrections due to superhorizon modes would be of fundamental interest.”