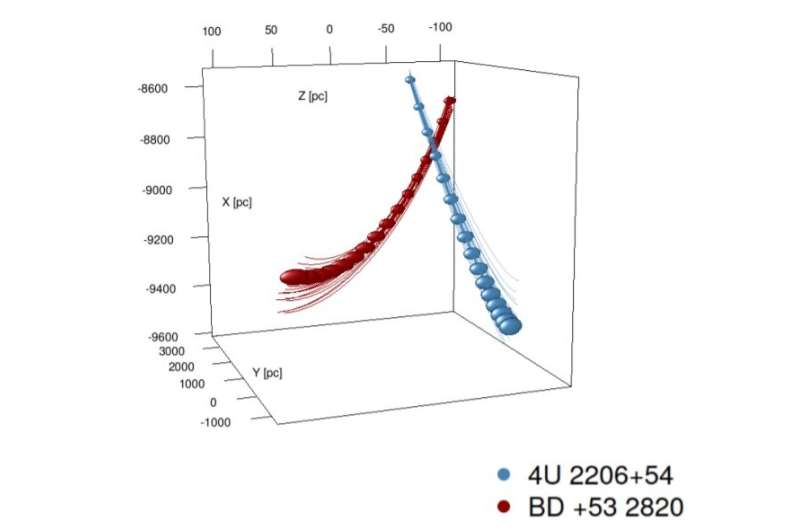 European astronomers have observed a peculiar high-mass X-ray binary known as 4U 2206+54. Results of the research provide essential information regarding the origin of this system. The study was presented in a paper published January 19 on the arXiv pre-print repository.

4U 2206+54 is an HMXB hosting a neutron star accreting from the wind of its companion, designated BD +53 2790, which exhibits a radial velocity modulation. Its orbital period of just 9.5 days is one of the shortest among the known HMXB systems.

With the strength of the surface characteristic magnetic field at a level of at least 20 trillion G, BD +53 2790 is assumed to be a magnetar—a rare, strongly magnetized neutron star. The donor star in this binary is a peculiar O9 V star with an overabundance of helium.

However, the origin of 4U 2206+54 remains unknown. Thus, in order to shed more light on this matter, a team of astronomers led by Valeri Hambaryan of the Astrophysical Institute and University Observatory Jena in Germany, has conducted a kinematic study of this HMXB.

“In order to identify the possible birthplace of 4U 2206+54 one needs to determine its possible membership to a stellar group either currently or in the past. The latter also requires to perform their trace back motion study in the Galaxy to test the concept: 4U 2206+54 and a stellar group or some of its members in the past were ‘in the same place at the same time,’” the researchers wrote in the paper.

The study found that HMXB 4U 2206+54/BD+53 2790 and a star known as BD+53 2820 that is the brightest star of one of the subgroups of the Cepheus OB1 (Cep OB1) association were at the at the same place (about 11,200 light years away) some 2.8 million years ago. The researchers suppose that at this location and time, a supernova (SN) in a close massive binary took place and can be considered as the birthplace of the currently observed binary.

Furthermore, the studied HMXB is currently at a distance of approximately 10,100 light years and has a space velocity of 75–100 km/s with respect to BD+53 2820. These parameters suggest that the progenitor of the neutron star hosted by 4U 2206+54 lost some 4 to 9 solar masses during the supernova explosion and the neutron star of this binary received a kick velocity of about 200–350 km/s. The researchers estimate that the progenitor’s initial mass was at a level of at least 32 solar masses.