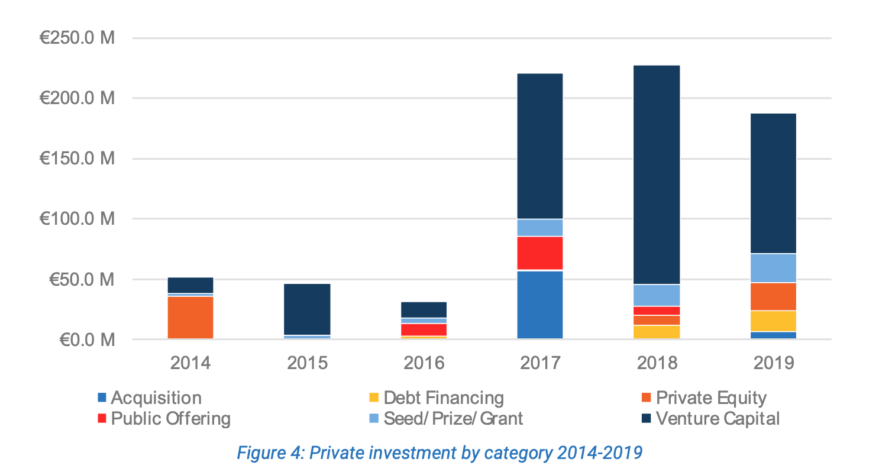 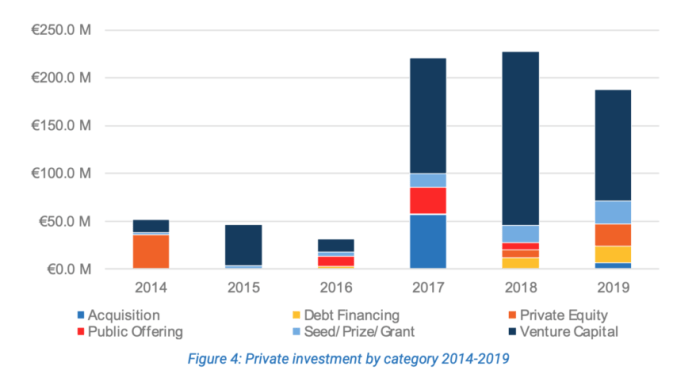 ESPI, using six years of data, said private investment in European space startups appears to be “plateauing” at around 200 million euros annually. ESPI began recording investments in 2017, and uses data going back to 2014, before which information on private space investment was “neither extensive nor exhaustive,” said Jules Varma, an ESPI researcher involved in the study.

The institute tallied a record of 228 million euros in private space investments in 2018 — the same year the global space industry set a since-broken record of $3.23 billion in total investments — and a similar amount in 2017. From 2014 to 2016, European space startup investment averaged 43.3 million euros annually.

ESPI said its estimate is “conservative” since exact amounts were not disclosed for 12 of the 56 investment deals included in the 2019 tally. European space startups largely raised money from investors in their home countries, ESPI found. Varma said it is likely simpler for European startups to find domestic investors rather than deal with the increased paperwork that comes with international funds.

Varma said the U.K. appears to be benefiting from a longstanding policy framework that supports space startups.

“I do think that the reason why the U.K. is so ahead of its other European counterparts is because they have a forward looking policy dating back to the early 2000s,” he said in an interview.

Why Swiss startups had so much financial success is less clear.

“It was quite a surprise to see [Switzerland] arising so sharply this year,” said Jean-Jacques Tortora, ESPI director. “At the moment, we don’t have an explanation.”

Tortora said ESPI does not make predictions about future investment levels, but believes one could “reasonably expect an increase” in 2020, given developments so far this year. In January the European Union said it would pump 100 million euros into space-related European venture capital funds, and in February French startup Kineis raised 100 million euros to fund a 25-satellite internet-of-things constellation.

ESPI defines a startup as a company that was founded within the last 10 years and has fewer than 250 employees and less than 50 million euros in annual revenue. The institute also doesn’t count a company as a startup if it has an annual balance sheet above 43 million euros or has been acquired by another company or listed on a stock market.

Varma said OneWeb had too many employees to be considered in ESPI’s 2019 report, but will likely be considered in 2020 since the company shrunk from 500 employees down to 74 as it filed for Chapter 11 bankruptcy protection in March. OneWeb’s extensive operations in the United States also factored into ESPI’s decision to exclude the company, despite OneWeb having its headquarters in the U.K., he said.

ESPI said it surveyed 73 European space startups for its report, of which 45% had between six and 50 staff. The majority of startups surveyed — 75% — were started using personal funds, ESPI said, though few plan to self fund in the future.

Venture capital counted for two-thirds of European space startup investment between 2014 and 2019, ESPI said, and 62% of investment in 2019. Other popular forms of funding included grants and prizes, private equity and debt financing, according to the institute.

Startups said revenue growth and customer acquisition are their top challenges. Many said government funding helps secure private capital, and that they anticipate European government organizations will become bigger customers of startups in the coming years, the report said.