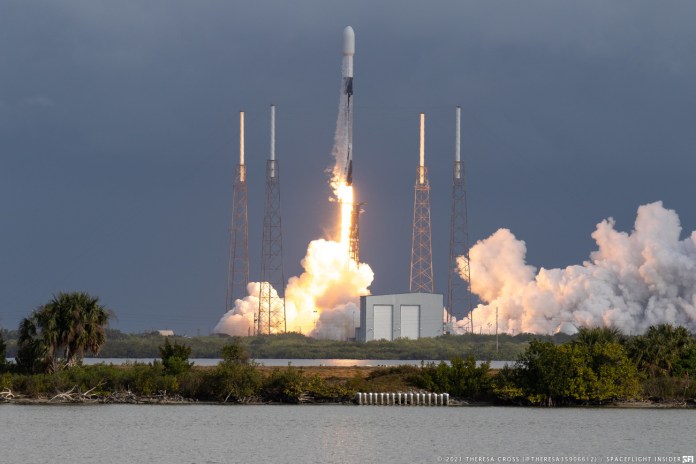 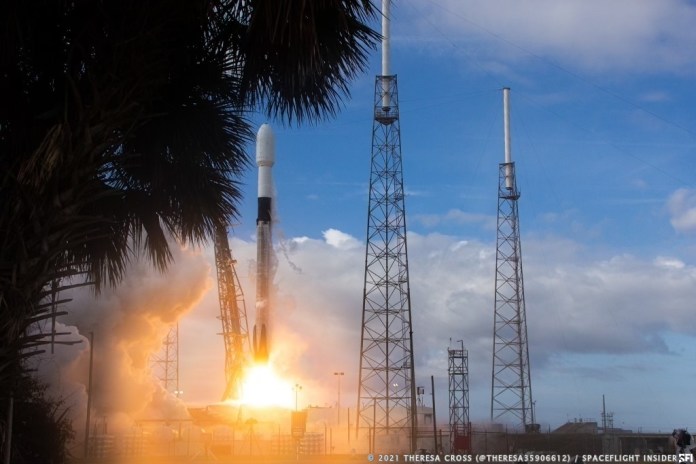 The Transporter-1 flight marks the third successful launch for SpaceX in 2021, paving the way for its goal of completing 40 successful launches between its East and West Coast launch sites. 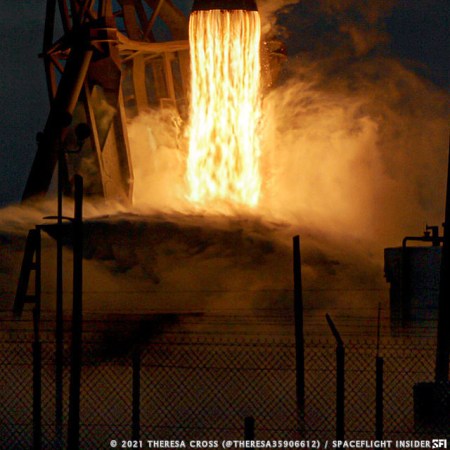 A closeup of the nine Merlin 1D engines on the first stage of the Falcon 9 rocket. Credit: Theresa Cross / Spaceflight Insider

Falcon 9 lifted off the pad at 10 a.m. EST (15:00 UTC) Jan. 24, 2021, into the Sunday morning skies, taking with it dozens of rideshare payloads, as well as 10 SpaceX Starlink satellites, into a sun-synchronous polar orbit.

As the rocket’s nine Merlin engines propelled it upward, the vehicle began pitching to align itself for a polar orbital insertion.

Given that most launches from the East Coast fly eastward, the launch trajectory for this mission proved to be a unique viewing experience for those along the South Florida coast.

At the point where most Falcon 9’s launching from Florida begin a northeasterly or easterly turn, Transporter-1 began to perform a dogleg maneuver to take it southward down Florida’s Atlantic coast and over Cuba.

After first stage separation approximately two and a half minutes after liftoff, the booster, making its fifth flight, performed its signature flip back maneuver in order to position itself toward its intended target, the autonomous drone ship “Of Course I Still Love You.”

Positioned about 553 kilometers downrange near the coast of Cuba, “Of Course I Still Love You” had just been released from a lengthy refurbishment and remained situated further south than any droneship has been before.

Once the first stage completed its entry burn, it made a final landing burn to touch down on the droneship, marking the fifth successful flight for this booster.

While the first stage was busy returning to Earth, the second stage continued its polar trajectory to insert the myriad of satellites and transfer stage, a first for Falcon 9, into a nominal orbit. 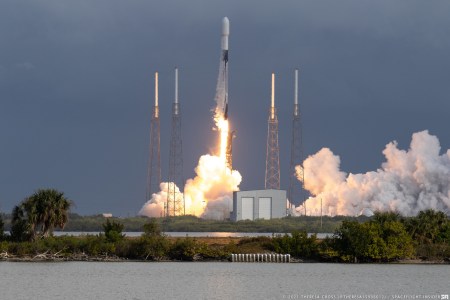 After a series of burns and coast phases, the satellites and “third stage” reached their intended orbit, and the massive payload of over 90 satellites was released.

The Transporter-1 mission is the first in a series of rideshare missions offered by SpaceX in an effort to open the door for smaller satellite providers to bring their payloads to orbit. Costing as little as $1 million for 100 kilograms of payload mass to orbit, the rideshare program hopes to provide the most competitive product in the industry, thanks in part to its proven record for reusability.

In addition to the over 90 satellites carried on this flight, SpaceX also gained approval from the Federal Communications Commission for 10 of its own Starlink satellites to hitch a ride to their first polar orbital injection.

Among the over 90 payloads sent to orbit today include the Canadian-made GHGSat affectionately known as “Hugo.”

Roughly the size of a microwave, Hugo is the second in a series of eight operational satellites aimed at improving Earth’s sustainability by measuring sources of methane emissions. The satellite is capable of detecting emission sources up to one hundred times smaller than most satellites by use of its patented Wide-Angle Fabry Perot that measures the absorption of sunlight by methane.