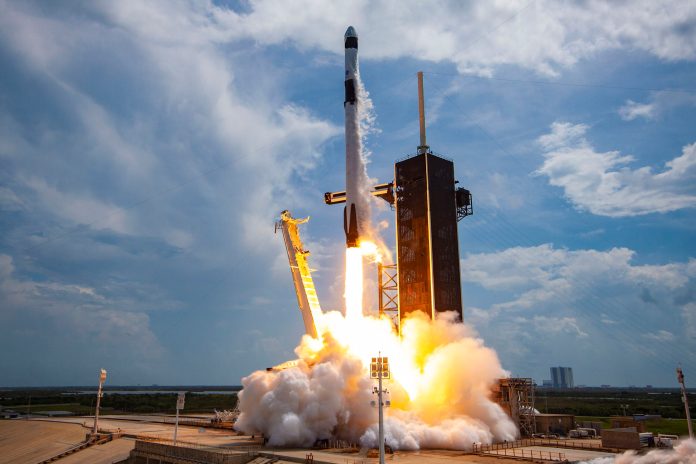 A mysterious small satellite built by the German company OHB, purported to be a pathfinder for a Chinese-owned communications constellation, took off from New Zealand Wednesday and soared into orbit on top of a Rocket Lab Electron launcher.

The 59-foot-tall (18-meter) Electron rocket lifted off from Launch Complex 1A at Rocket Lab’s privately-owned base on the North Island of New Zealand at 2:26 a.m. EST (0726 GMT; 8:26 p.m. local time), following a nearly half-hour delay to wait for ground winds go come within limits.

Rocket Lab, headquartered in Long Beach, California, called off a previous launch attempt Saturday to evaluate data from a sensor on the Electron vehicle.

Aside from the weather, Wednesday’s terminal countdown appeared trouble-free, and the two-stage all-black carbon-fiber Electron launcher fired off its pad with more than 50,000 pounds of thrust from nine kerosene-fueled Rutherford engines.

Arcing toward the south over the Pacific Ocean, the rocket passed the speed of sound in about a minute, then shut down its first stage engines about two-and-a-half minutes into the mission. The Electron’s first stage separated moments later, allowing the second stage to ignite its single Rutherford engine, followed by jettison of the rocket’s no-longer-needed nose cone after climbing into the airless vacuum of space.

Rocket Lab is experimenting with recovering booster stages for reuse, but the company did not attempt to retrieve the Electron first stage on Wednesday’s mission.

The second stage fired its engine for more than six minutes to reach a parking orbit. Rocket Lab’s kick stage deployed from the Electron second stage, flew over Antartica, and then headed back north over the Atlantic Ocean.

“Congratulations to our mission partners at OHB Group,” Beck said in a statement. “We’re thrilled to have kicked off a busy year with a dedicated mission that once again demonstrates Electron’s unique ability to provide our small satellite customers with control over their mission schedule and orbital parameters.”

Officials are saying little about the payload the Electron rocket is carrying into space.

OHB Group, which builds small and medium-sized satellites, procured the launch from Rocket Lab through its subsidiary OHB Cosmos, according to Rocket Lab.

The payload from OHB is a “single communication microsatellite that will enable specific frequencies to support future services from orbit,” Rocket Lab said in a statement.

Before the launch Wednesday, OHB and Rocket Lab released no additional details about the satellite, which was built by OHB divisions in Germany, Sweden, and the Czech Republic. Officials even kept the satellite’s name secret.

OHB finally officially revealed the name of the spacecraft — GMS-T — in a tweet shortly after the launch.

“By flying as a dedicated mission on Electron, OHB and their mission partners have control over launch timing, orbit, integration schedule, and other mission parameters,” Beck said in a pre-launch statement.

Responding to questions from Spaceflight Now, an OHB spokesperson declined to identify the end user of the satellite or provide any other details about its mission.

“OHB has purchased an Electron launcher for a customer,” the spokesperson said.

A short prepared statement from OHB, based in Bremen, Germany, also included no further information about the nature of the mission.

“OHB have developed, built and tested a satellite on behalf of the customer. We will also operate it until the end of the satellite’s operational life,” said Dr. Lutz Bertling, member of the OHB executive board and responsible for digitalization, strategy and business development.

In the days before the launch, the only hint about the identity of the satellite and OHB’s possible customer for the mission was revealed in an image of the Electron rocket’s payload fairing, which had a pair of mission logos.

Sleuthing by Alexandre Najjar, a launch vehicle and satellite market consultant for Euroconsult, revealed what might be the customer for the mission.

“I think I have ID-ed the mystery OHB payload!” Najjar tweeted, adding that the satellite “seems” to be a prototype for a low Earth orbit broadband network linked to a Chinese company named GMS, also known as Shanghai Spacecom Satellite Technology.

GMS has a business relationship with KLEO Connect, a German company with Chinese financing that seeks to develop a fleet of small satellites to provide industrial asset tracking and data relay services. KLEO Connect’s first two technology demonstration satellites launched on a Chinese rocket in 2019.

Najjar wrote on Twitter that details on the arrangement between OHB and GMS is “probably secret due to Germany-China relations.”