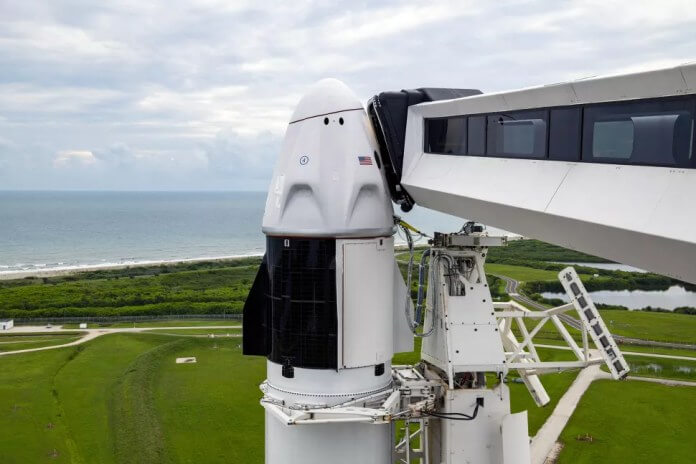 SpaceX just test-fired the rocket that will take the private Inspiration4 mission on a three-day journey around Earth.

The private spaceflight company conducted a static-fire test on Monday (Sept. 13) of its Falcon 9 rocket at Pad 39A here at NASA’s Kennedy Space Center. The test is one of the last major milestones ahead of a planned launch on Wednesday (Sept. 15). As preparations continue, launch personnel are also monitoring weather conditions, which currently offer 80% odds of supporting flight.

The routine preflight test kicked off the countdown to the highly-anticipated flight of the first-ever all-civilian orbital spaceflight mission, called Inspiration4. The SpaceX Crew Dragon spacecraft, carrying four private citizens, is not bound for the International Space Station (ISS), but instead will free-fly around the Earth for three days before splashing back down off the coast of Florida.

The test occurred as expected in the predawn hours on Monday, just two days before the mission’s scheduled launch date. Smoke and fire billowed briefly as the rocket’s nine Merlin 1D engines were lit. The brief ignition, known as a static-fire test, is a standard part of prelaunch procedures and is one of the last major milestones before liftoff.

During the test, the Falcon 9 is held down on the pad while its nine first-stage engines are briefly fired. This allows crews to ensure that all systems are working properly and that the rocket is ready to fly. Shortly after the test, SpaceX tweeted that the static-fire test was a success and that the company planned to launch sometime during a five-hour window opening Sept. 15 at 8:02 p.m. EDT (0002 GMT on Sept. 16).

The flight marks SpaceX’s 23rd mission of the year, its fourth crewed mission and its first crewed mission no. The rocket’s first stage is expected to land on a SpaceX’s drone ship, “Just Read the Instructions.” Following a successful liftoff, the crew capsule will spend three days orbiting Earth on a trajectory that will take it higher than the altitude of the ISS.

In true SpaceX style, both the Dragon capsule and its rocket have flown before. For this mission, the Dragon crew capsule is the same one that carried the Crew-1 astronauts to space in Nov. 2020, dubbed Resilience. The first-stage booster will be embarking on its third mission, having previously ferried two different upgraded GPS satellites into space for the U.S. Space Force.

With the Dragon capsule perched atop the rocket, the duo rolled out of the hangar and onto the pad at Launch Complex 39A on Sunday morning (Sept. 12). The rocket and capsule were lifted upright later that afternoon to stand 256.3 feet (78.1 meters) tall.

With the rocket secured to the launch pad, teams were up very early Monday morning to load the rocket with super-chilled propellants, kerosene and liquid oxygen, and to briefly ignite the first stage’s nine Merlin 1D engines.

The engines briefly fired at 2:30 a.m. EDT (0630 GMT), generating 1.7 million pounds of thrust while the booster remained firmly on the ground. Engineers reviewed the data before confirming they would proceed with the Falcon 9’s planned launch attempt Wednesday evening.

The static-fire test comes on the heels of a full dress rehearsal conducted on Sunday evening. For the dress rehearsal, the Inspiration4 crew donned their spacesuits and rode to the launch pad in SpaceX’s fleet of Teslas. From there, the crew ran through launch day procedures as a final practice before liftoff.

The mission will have a five-hour launch window that opens at 8:02 p.m. EDT on Sept. 15 (0002 GMT, Sept. 16); during that window, the crew will have multiple opportunities to get off the ground.

SpaceX plans to land the mission’s first-stage booster on a floating platform at sea; if successful, the feat would mark the company’s 92nd booster recovery. One of its newest ships, “Doug,” has been deployed to help the veteran “Just Read the Instructions.” In addition to the booster-catching drone ships, the company has stationed its fleet of Dragon-recovery vessels around Florida in case of an abort during liftoff.

Splashdown is expected approximately three days after launch, with Dragon having multiple potential landing zones, with the company making a final selection closer to landing based on predictions of weather and sea states.

Current weather forecasts from the 45th Weather Squadron predict an 80% chance of favorable conditions for liftoff, with the only causes for concern being the thick cloud rule and flight through precipitation.