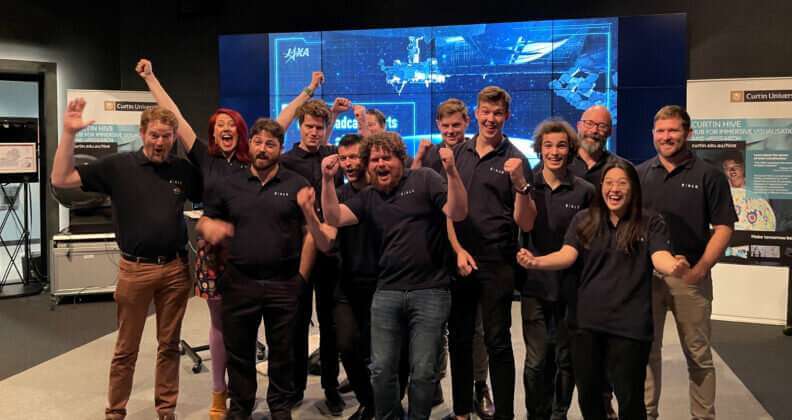 Western Australia’s homegrown spacecraft, Binar-1, has been shot into the vacuum of space- deployed into Low Earth Orbit from the International Space Station (ISS), five weeks after blasting off from Cape Canaveral in Florida.

Director of Curtin’s Space Science and Technology Centre (SSTC), John Curtin Distinguished Professor Phil Bland, joined SSTC staff and students yesterday to watch a live feed as Binar-1 was placed into the tiny airlock of the Japanese Experiment Module Kibo on the ISS and sent into space.

“The launch of WA’s first homegrown spacecraft on the Space-X rocket was exciting, but this moment and the coming few days are the really crucial points for our Binar Space Program and the team of staff and students who designed and built Binar-1 from scratch,” Professor Bland said.

“We can’t wait to hear Binar-1’s ‘first words’ from space—that will be the time when we will be able to declare the success of our first space-mission and put us firmly on the path to proving that our technology can deliver.

“That contact and the protocol testing that follow will set us up to achieve our aim of sending six more satellites into space over the next 18 months, and our ultimate goal of taking WA to the Moon by 2025.”

Binar Program Manager, Ben Hartig said with Binar-1 now safely in orbit, the team is focussed on listening out for her ‘heartbeat.”

“We built Binar-1 to communicate using Ultra High Frequency (UHF) radio signals which is the backbone of an exciting opportunity to engage both the ham radio community and STEM students,” Mr Hartig said.

“We have been collaborating with amateurs around the world and local school groups, so that they are also able to listen to Binar-1 as it passes overhead.

“With the right equipment and antenna, anyone can hear Binar-1 when it makes contact. But it will be our Curtin SSTC team who can decode the signal to tell us where Binar-1 is and how it is performing. The team will confirm all systems are working and then begin sending instructions for the next phase of its mission.”

The deployment of Binar-1 was made possible through Curtin’s partnership with start-up Space BD Inc, which is the official service provider selected by JAXA, the Japanese Space Agency, in the area of ISS utilization and satellite launch service.

Testing the viability of Binar-1 in space, will be facilitated through Curtin’s alliance with remote operations specialists, Fugro, and their Space Automation, Artificial Intelligence and Robotics Control Complex (SpAARC).

The Binar Space Program has been generously supported by a State Government investment of $500,000 to facilitate joint operations with the Fugro SpAARC facility, and advance a valuable outreach component to inspire young people in WA to pursue careers in STEM. It is also supported by the Australian Remote Operations for Space and Earth (AROSE) consortium.

Binar-1 will orbit 400 kilometers above Earth’s surface, about the distance from Perth to Albany, and will circle the planet once every 90 minutes. Two small cameras on board will also capture images of WA’s coastline.

The WA public can re-watch the Binar-1 launch and be part of history by visiting the Big Binar at WA Museum Boola Bardip and writing a message to space until October 11.