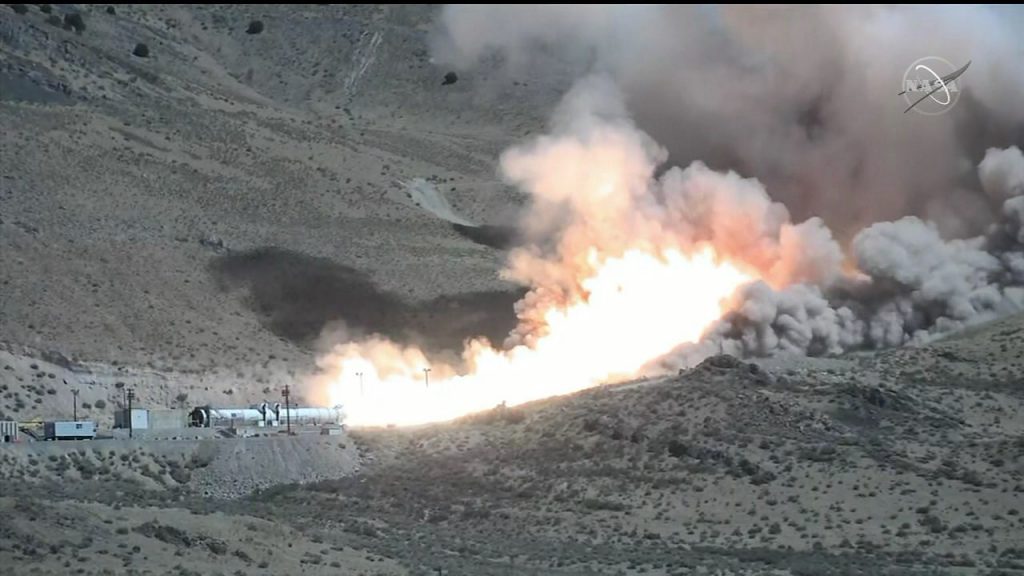 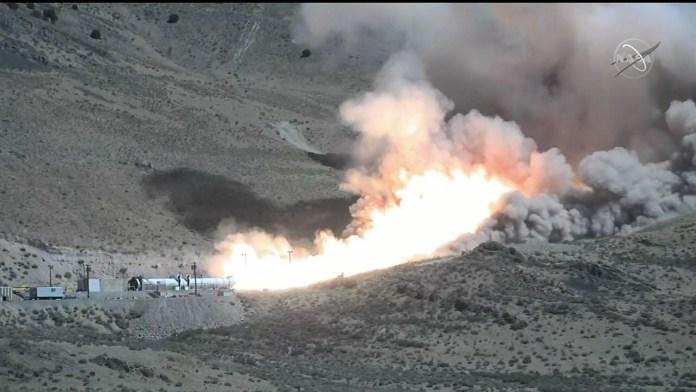 The Flight Support Booster, or FSB-1, test will help engineers evaluate new materials, processes and improvements for upgraded solid rocket boosters that will power NASA’s Space Launch System heavy-lift rocket beginning with its fourth mission some time in the mid-2020s.

Positioned horizontally in a test stand for the hotfire test Wednesday, the 154-foot-long booster generated about 3.6 million pounds at maximum power.

Before the firing, NASA said the test would also provide another opportunity to evaluate motor manufacturing and performance. Northrop Grumman, through its precursor company Orbital ATK, had conducted five previous test-firings of the five-segment SLS booster since 2009, including two developmental motors and two full-size qualification units to certify the booster design is ready for flight.

The segments for the two boosters slated to launch on the first unpiloted SLS test flight arrived at the Kennedy Space Center in June following a train journey from Northrop Grumman’s booster manufacturing plant in Utah. Those segments are now being readied for stacking on top of the SLS mobile launch platform inside the Vehicle Assembly Building at Kennedy.

Stacking of the boosters for the first SLS test launch, known as Artemis 1, will commence once the SLS core stage completes a critical full-duration hotfire test at the Stennis Space Center in Mississippi later this year.

The Artemis 1 flight will carry an uncrewed Orion spacecraft into space to begin a mission to orbit the moon, then return to Earth after a test flight lasting several weeks. That will set the stage for the first piloted SLS/Orion mission around the moon in 2023.

NASA intends for the astronauts on the third SLS/Orion launch to attempt a landing on the moon’s south pole. The Trump administration has set a 2024 deadline for the moon landing mission, known as Artemis 3.

Beginning with the Artemis 4 mission, Northrop Grumman plans to introduce modifications to the booster. Northrop Grumman won a NASA contract June to begin planning the production of boosters six additional SLS launches, beyond the motors for the first three flights that were already under contract.