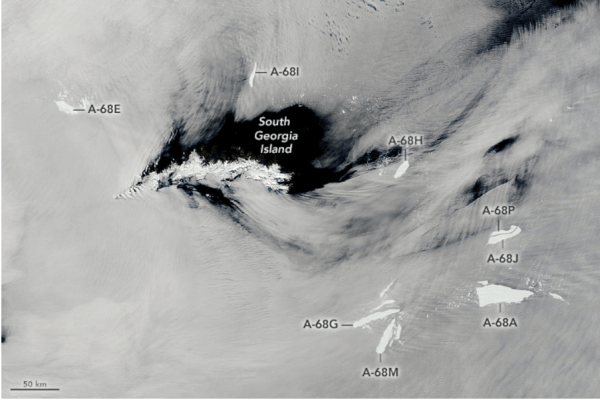 The tally is something like 61 million Olympic-sized swimming pools.

A rogue iceberg that drifted dangerously close to an Antarctic penguin population in 2020 and 2021 released billions of tons of fresh water into the ocean during its breakup.

A new study, based on satellite data, tracks the aftermath of the once-mighty iceberg A-68a, which held the title of world’s largest iceberg for more than three years before shattering into a dozen pieces. (NASA’s Earth Observatory once dubbed the various mini-bergs “alphabet soup.”)

For a while, there were worries the iceberg might threaten a penguin-filled island called South Georgia, located about 940 miles (1,500 kilometers) northeast of the Antarctic Peninsula. Happily, that never came to pass, but the new research shows that the iceberg flooded the region with fresh water, potentially affecting the local ecosystem and providing yet another example of the effects of global warming on the oceans.

The research consulted data gathered by missions including Sentinel-1 (operated by European Space Agency, or ESA), Sentinel-3 (ESA), CryoSat-2 (ESA) and ICESat-2 (NASA), as well as the Moderate Resolution Imaging Spectroradiometer, or MODIS, instrument that flies aboard two NASA satellites, Aqua and Terra.

The satellite data shows that during the iceberg’s three-month melting period in late 2020 and early 2021, the former A-68a flushed into the ocean about 162 billion tons (152 billion metric tonnes) of fresh water — equivalent to 61 million Olympic-sized swimming pools, according to a press release from United Kingdom study participant University of Leeds.

“The berg had melted enough as it drifted to avoid damaging the sea floor around South Georgia by running aground,” the university stated. “However, a side effect of the melting was the release of a colossal 152 billion tonnes of fresh water in close proximity to the island — a disturbance that could have a profound impact on the island’s marine habitat.”

Fresh meltwater and nutrients tend to flow from melting icebergs. The freshwater flooding alters ocean circulation and the ocean ecosystem nearby the glacier fragment, the university noted.

“The next thing we want to learn is whether it had a positive or negative impact on the ecosystem around South Georgia,” Leeds lead author and Ph.D. candidate Anne Braakmann-Folgmann said in the same statement.

She noted the iceberg moved across a common ocean “highway” known as the Drake Passage, so the fate of A68-A may help understand how icebergs in that zone influence the ocean in general.

A study based on the research was published in the forthcoming March 1 issue of Remote Sensing of Environment.