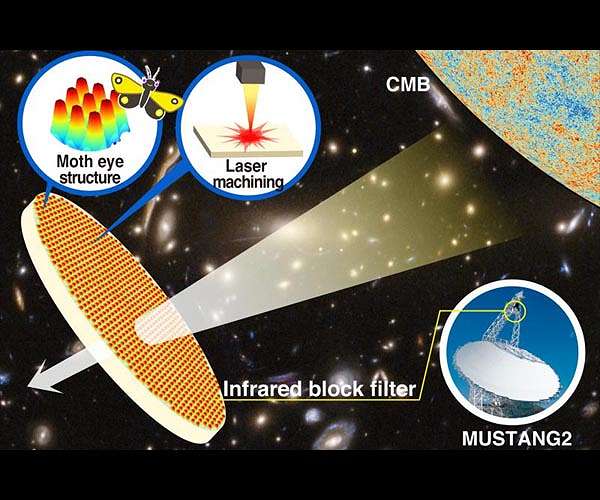 Scientists from the Kavli Institute for the Physics and Mathematics of the Universe and the University of Minnesota, Tomotake Matsumura and Shaul Hanany, and their collaborators have made a new type of optical element that will improve the performance of telescopes studying radiation from the Big Bang.

The cosmic microwave background (CMB) is a relic radiation remnant from the big bang. It reaches our telescopes after traveling 14 billion years since the birth of the Universe. Studying the properties of this radiation, scientists infer the physics of the big bang, how clusters of galaxies form, and the matter and energy content in the Universe. Four Nobel prizes have been awarded for past studies of the CMB.

To study the CMB, telescopes must be tuned to wavelengths in which it is most intense, about 1-3 mm, and they must separate out shorter wavelength radiation that the atmosphere and Milky Way emit. Among the most effective optical elements that absorbs the short wavelength radiation but lets the CMB pass through is alumina, a material made of aluminum and oxygen and that is second in hardness only to diamond.

One challenge with using alumina is that it also reflects almost 50% of the radiation impinging on it. Matsumura and Hanany have now come up with a new way to fabricate anti-reflective structures that reduce reflections fifty-fold.

The researchers partnered with Mark Devlin and Simon Dicker, colleagues at the University of Pennsylvania who are operating the MUSTANG2 instrument, which is coupled to the Green Bank Telescope in Virginia. Hanany and Matsumura provided the MUSTANG2 team with an alumina short-wavelength absorber that has the new anti-reflective structures. The MUSTANG2 instrument is now conducting sky observations with the new technology, demonstrating for the first time its success.

The researchers patterned the alumina with small pyramidal structures, which are about one millimeter tall (0.04 inch) and repeat across the 30 cm (one foot) diameter with a periodicity of just less than one millimeter.

It has long been known that incorporating such structures on the surfaces of materials reduces reflections. With the small pyramids, light enters and is leaving the material more gradually, leading to much lower reflection. Matsumura and Hanany’s innovation is in the way they patterned the alumina, which is too hard to be machined with standard tools.

They used ultra-short pulsed laser, with pulses few trillionths of a second long and reaching 100 megawatts each, to ablate the material away and to shape the surface relief to its optimal anti-reflective shape. Within about four days the laser process produced 320,000 pyramids on both sides of the alumina disc.

The researchers measured the properties of the alumina sample and showed that it reflects less than 1% of the incident radiation. This is the first time such an optical element has been fabricated and coupled to an operating instrument, and it is the largest sample of alumina to have been laser-ablated.

This innovation will lead to more efficient instruments peering back in time and revealing the physical process at the Big Bang and throughout the evolution of the universe.