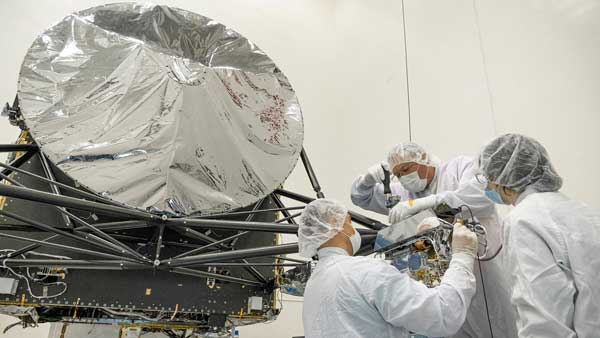 Set to launch next year, NASA’s Psyche mission marks the first time the agency has set out to explore an asteroid richer in metal than rock or ice.

PASADENA, Calif. (NASA PR) — More than 150 years have passed since novelist Jules Verne wrote “Journey to the Center of the Earth,” but reality has yet to catch up with that science fiction adventure. While humans can’t bore a path to our planet’s metallic core, NASA has its sights set on visiting a giant asteroid that may be the frozen remains of the molten core of a bygone world.

Called Psyche, this asteroid orbits the Sun in the main asteroid belt, between Mars and Jupiter. Using data gathered from Earth-based radar and optical telescopes, scientists believe that Psyche is made largely of metal. It could be part or all of the iron-rich interior of an early planetary building block that was stripped of its outer rocky shell as it repeatedly collided with other large bodies during the early formation of the solar system.

The asteroid, which is about 173 miles (280 kilometers) at its widest point, could also be something else. It could be the leftover piece of a completely different kind of iron-rich body that formed from metal-rich material somewhere in the solar system.

NASA’s Psyche mission hopes to find out. Set for an August 2022 launch, the spacecraft will for two years orbit the asteroid it was named after, taking pictures, mapping the surface, and looking for evidence of an ancient magnetic field. Psyche also will study the neutrons and gamma rays coming from the asteroid’s surface to help determine its elemental composition.

“There are a lot of basic questions about Psyche that are unanswered,” said the mission’s principal investigator, Lindy Elkins-Tanton of Arizona State University. “And with every detail that gets added from data we can collect from Earth, it just becomes harder to make a sensible story. We really don’t know what we’re going to see until we visit, and we’re going to be surprised.”

For instance, previous ground-based observations led scientists to believe that the asteroid was as much as 90% metal. Recent research led by Elkins-Tanton used updated density measurements to estimate that the asteroid is more likely between 30% and 60% metal.

And scientists are puzzled why Psyche appears to be low in iron oxides, which are chemical compounds made of iron and oxygen. Mars, Mercury, Venus, and Earth all have them. “So if we’re correct that Psyche is a mixture of metal and rock, and the rock has very little iron oxide, then there’s got to be a strange story about how it was created – because it doesn’t fit the standard stories of planetary creations,” Elkins-Tanton said.

Scientists also don’t know where Psyche formed. It might have originated inside the main asteroid belt, but it’s also possible that it was born in the same zone as the inner planets like Earth – or in outer solar system, where giant planets like Jupiter now reside. Neither origin story follows a simple path to where Psyche lives now, 280 million miles (450 million kilometers) from the Sun.

Asteroids in general can offer insight into planet formation and how the early solar system worked 4.6 billion years ago. But Psyche is particularly interesting to scientists because of how unusual it is, with its metal content, high density, and low concentration of iron oxides.

“The fact that it’s so unusual is telling us a new story that we haven’t seen before about how asteroids evolved,” said Bill Bottke, Psyche mission scientist of the Southwest Research Institute in Boulder, Colorado. “That’s a piece of the story we don’t have right now. By getting that piece together with all the others we have, we continue to refine our story of how the solar system formed and evolved early on.”

Tools of the Trade

To help figure out the asteroid’s origins, the mission’s science investigation will rely on a magnetometer, a gamma ray and neutron spectrometer, and a multispectral imager. Scientists know that the asteroid doesn’t generate a magnetic field the way Earth does, but if Psyche had a magnetic field in the past, it could still be recorded in the asteroid’s material today. With sensors mounted onto a 6-foot (2-meter) boom, the magnetometer can determine whether Psyche is still magnetized. If so, that would confirm that the asteroid is part of the core of an early planetesimal, the building block of an early planet.

The orbiter’s gamma ray and neutron spectrometer instrument will help scientists determine the asteroid’s chemical elements. As cosmic rays and high-energy particles impact Psyche’s surface, the elements that make up the surface material absorb the energy. The neutrons and gamma rays they emit in response can be detected by the spectrometer, allowing scientists to match their properties to those emitted by known elements to determine what Psyche is made of.

Meanwhile, a pair of color cameras make up the multispectral imager. The imager is sensitive to light just beyond what humans can see, using filters in the ultraviolet and near-infrared wavelengths. The light reflected in these filters could help determine the mineralogy of any rocky material that may exist on Psyche’s surface.

The spacecraft’s telecommunications system will help with the science as well. The X-band radio system is primarily used to send commands to the spacecraft and receive engineering and science data from it. But scientists can also analyze subtle changes in these radio waves to measure the body’s rotation, wobble, mass, and gravity field, providing additional clues about the composition and structure of Psyche’s interior.

But before any of this science analysis gets underway, there will be pictures. By late 2025, three years after launch, Psyche will be within sight of the asteroid, and the imager team will be on high alert.

“Even before we get into orbit, we’ll start getting much better pictures than we can from telescopes on Earth. We’ll start to resolve features, see big craters, crater basins – maybe mountain ranges. Who knows what we’ll see?” said Jim Bell of Arizona State University, deputy principal investigator of Psyche and imager team lead. “All we know is that the reality of Psyche is going to be even weirder and more beautiful than we can imagine.”

ASU leads the Psyche mission. NASA’s Jet Propulsion Laboratory in Southern California is responsible for the mission’s overall management, system engineering, integration and test, and mission operations. The mission phase known as assembly, test and launch operations is currently underway at JPL. By next spring, Psyche will be fully assembled and ready to ship to NASA’s Kennedy Space Center.

JPL also is providing a technology demonstration instrument called Deep Space Optical Communications that will also fly on Psyche, which will test high-data-rate laser communications that could be used by future NASA missions.

Psyche is the 14th mission selected as part of NASA’s Discovery Program.

For more information about NASA’s Psyche mission go to: