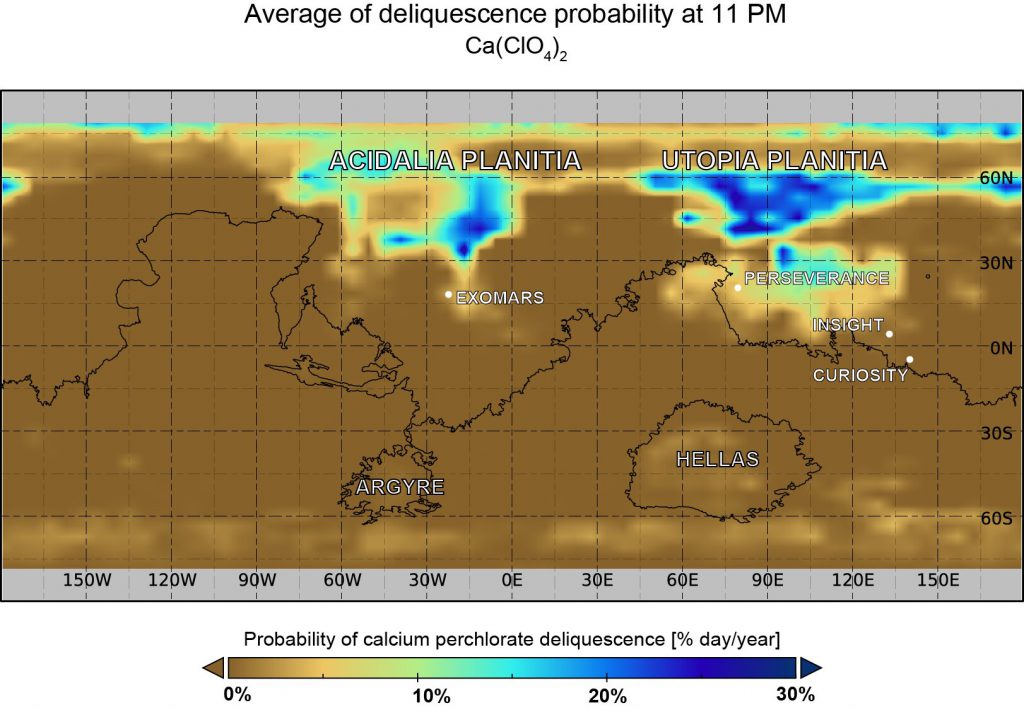 Planetary scientists from Konkoly Observatory in Budapest have modeled the emergence of salty but liquid water on the surface of Mars. According to the results of Bernadett Pál and Ákos Kereszturi, late night and early morning hours during Martian spring and summer could be ideal times for the process to occur, with conditions being more favorable in the northern hemisphere. They examined how effectively hygroscopic salts, which have an affinity to adsorb or absorb water vapor from the atmosphere, enter solutions to form brines.

Liquid water is one of the main features we search for in pursuit of the discovery of life (as we know it) outside of Earth. Our neighboring planet, Mars, once had larger amounts of liquid water, but due to its lower gravity and lack of global magnetic field, large amounts escaped into space. The remaining water on Mars is mostly present in the forms of water vapor and ice. Because of the cold (-60°C on average) and the low air pressure, even if ice melts, it quickly sublimates—turning into vapor—rather than remaining as a stable liquid on the surface.

However, salty solutions can remain liquid at much lower temperatures. Perchlorates, which aid the liquefying process (such as calcium perchlorate: Ca(ClO4)2), have been found by both the Phoenix lander and later by the Curiosity rover. During this process, called deliquescence, the salt takes up enough water from the atmosphere to turn into a liquid solution. Several laboratory research projects here on Earth study deliquescence, which is an important process in many areas from food science to agriculture.

In-situ experimental data is not yet available for Mars, however; as such, the main method of research currently is computer modeling. The European ExoMars program will investigate the deliquescence process on Mars, for the first time, in 2023. The Russian Kazachok lander platform carrying the Rosalind Franklin rover will house the HABIT (HabitAbility: Brine Irradiation and Temperature) instrument containing the BOTTLE experiment (Brine Observation Transition To Liquid Experiment) to inspect deliquescence. This experiment, in which Hungarian scientists are also involved, will examine the brine forming capabilities of multiple salts. For liquid briny solutions to form, salt-specific minimum temperature and relative humidity levels must be met. Magnesium perchlorate and calcium perchlorate, the salts modeled in this study, remain liquid at around -70°C if relative humidity is high enough.

“I can’t wait for the first results of the ExoMars BOTTLE Experiment. I’ve been working on modeling the possibilities for liquid water formation on the Martian surface for years, and we will be able to learn a great deal from the first true experimental results there,” Ms Bernadett Pál, a graduate student working at Konkoly Observatory of the Research Centre of Astronomy and Earth Sciences, and the lead author of the study published in the journal Icarus, explained.

According to the results of the Hungarian scientists, when simulating a whole Martian year, both hemispheres can become ideal for calcium perchlorate deliquescence from the local spring through late summer. The highest chance is expected at late night until the early morning hours, Martian local time. Looking globally at the whole planet, almost anywhere north of 30°N latitude can be ideal for brine emergence late at night, while in the early morning hours the large basins (Acidalia Planitia, Utopia Planitia) are promising. An additional important result is that at the planned landing site of the ExoMars rover, Oxia Planum, both the late night and early morning hours seem ideal for liquid brine formation. In the southern hemisphere, a small amount of liquid could emerge following the receding polar ice cap.

“The recent work by Ms. Pál and Dr. Kereszturi provides important insights into the potential to form brines on Mars, which is very relevant to understanding Mars’ biologic potential. Additionally, vetting expectations of where and when brines can form and showing that such conclusions are independent of the type of climate model used, like was done here by comparing to my own work published in 2020, makes these findings robust,” said Dr. Edgard Rivera-Valentín, NASA early career fellow at USRA LPI, who was not part of this research. “Their detailed work looking at seasonality and diurnal effects furthers the field by providing important information for future missions to Mars and their experiments, like the BOTTLE experiment on board the ExoMars Rosalind Franklin rover,” they added.