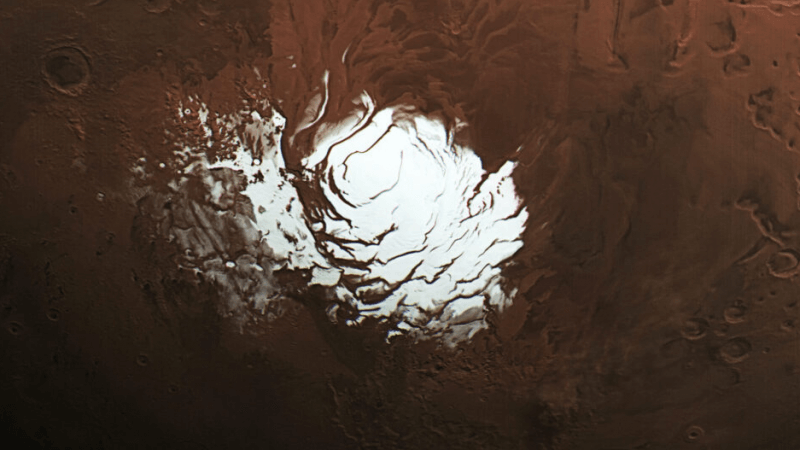 Are there liquid-water lakes beneath Mars’ south polar ice cap? The answer seemed to be a big yes back in 2018 when scientists announced the first evidence for the lakes. But now, that initial, seemingly clear, result has gotten muddier. Scientists in Austin, Texas, asserted in late January, 2022, that Mars’ polar “lakes” are probably not lakes at all, but instead volcanic rock. Almost simultaneously, scientists in San Antonio – only about 80 miles (129 km) away – provided new evidence supporting the idea of liquid lakes beneath Mars’ South Pole. And so the debate over lakes at Mars’ poles is raging.

The scientists gunning for volcanic rock are at the University of Texas Institute for Geophysics (UTIG) in Austin. The liquid lakes proponents are at the Southwest Research Institute (SwRI) in San Antonio. The UTIG researchers in Austin published their peer-reviewed results in Geophysical Research Letters. The SwRI team published their peer-reviewed results in ScienceDirect.

Both papers appeared in January 2022. The second study is also included in the Earth and Planetary Science Letters for February 1, 2022.

Ice and water on Mars

If you follow space news, you’ve likely been aware of the debate about water on Mars for decades. Prior to the 2018 announcement of possible liquid lakes at Mars’ poles, the discoveries were mostly about water-ice, possible small amounts of watery brines temporarily running on the surface, or yet more evidence for large amounts of water on ancient Mars.

So water on Mars is not a new subject. But the possibility of liquid lakes at Mars’ poles is relatively new.

So which is it? Liquid lakes or volcanic rock? It turns out that after the 2018 announcement of possible subsurface lakes on Mars (that earlier evidence came from ESA’s Mars Express spacecraft), some – but not all – scientists began to express doubts. The doubts sprang primarily from calculations suggesting that conditions needed to keep the water liquid on Mars were unlikely.

Planetary scientist Cyril Grima at UTIG in Austin is lead author of the new study that suggests volcanic rock as the culprit, not liquid lakes. He said in a statement:

For water to be sustained this close to the surface, you need both a very salty environment and a strong, locally generated heat source. But that doesn’t match what we know of this region.

These UTIG researchers assert that the bright spots or reflections interpreted to be lakes in radar images are probably deposits of volcanic rock instead. From the paper:

We find that some existing volcanic-related terrains could produce a very strong basal signal analog to what is observed at [Mars’] south polar cap. Our analysis strengthens the case against a unique hypothesis based solely on liquid water for the nature of the polar basal material.

How did Grima and his team make that determination? Basically, they took a radar map of Mars and overlaid it with an imaginary ice layer one mile (1.6 km) thick. The researchers compared surface features across their imaginary Mars with those under Mars’ real ice cap. And, as they’d suspected they would, they found reflections across the planet similar to those at the poles. The sites of those reflections matched the locations of known volcanic plains on Mars.

I think the beauty of Grima’s finding is that while it knocks down the idea there might be liquid water under the planet’s South Pole today, it also gives us really precise places to go look for evidence of ancient lakes and riverbeds and test hypotheses about the wider drying out of Mars’ climate over billions of years.

Like the original study suggesting water lakes in 2018, Grima’s new study is based on data from the MARSIS radar on ESA’s Mars Express orbiter. Grima used three years of MARSIS radar data for his study.

But that’s not the end of the debate. Remember … the second study, from SwRI in San Antonio, released in the same month (January 2022) points to liquid water as a possible or even likely explanation for the MARSIS radar data.

In the second study from SwRI, the researchers measured the properties of brine-ice mixtures. Brines are just water with high salt content. They did so at temperatures down to -145 degrees Fahrenheit (-98 degrees Celsius) because, well … Mars is cold, especially at its poles. SwRI geophysicist David Stillman conducted the new measurements. He wanted to investigate the assumption that Mars’ south polar cap experiences temperatures significantly lower than the melting point of water. But is that true?

To address this possibility, Stillman and his colleagues used the previously published data, simulations and new laboratory measurements. Based on his new study, Stillman explained:

Lakes of liquid water actually exist beneath glaciers in Arctic and Antarctic regions, so we have Earth analogs for finding liquid water below [Mars] ice. The exotic salts that we know exist on Mars have amazing ‘antifreeze’ properties allowing brines to remain liquid down to -103 degrees Fahrenheit. We studied these salts in our lab to understand how they would respond to radar.

Stillman specializes in detecting water in any form on planetary bodies. So his experience – over a decade – is well-suited to this task.

My Italian colleagues reached out to see if my laboratory experiment data would support the presence of liquid water beneath the Martian ice cap. The research showed that we don’t have to have lakes of perchlorate and chloride brines, but that these brines could exist between the grains of ice or sediments and are enough to exhibit a strong dielectric response. This is similar to how seawater saturates grains of sand at the shoreline or how flavoring permeates a slushie, but at -103 degrees Fahrenheit (-75 degrees Celsius) below a mile of ice near the South Pole of Mars.

So, the bright radar spots might be water after all, although perhaps more like cold, wet sand or melted ice than lakes. We won’t know for sure until more data can be obtained from orbiters like Mars Express.

The study questions the interpretation of the bright spots as saline ice in the earlier study. According to the paper:

Because conventional models assume basal temperatures (greater or less than 200 K) much lower than the melting point of water, this interpretation has been questioned and other explanations for the source of the bright basal reflections have been proposed, involving clay, hydrated salts and saline ices. Combining previous published data, simulations and new laboratory measurements, we demonstrate that the dielectric properties of these materials do not generate strong basal reflections at MARSIS frequencies and Martian temperatures.

The question of life

If there is indeed water on Mars today, could it support microbial life? As Stillman noted:

In this case ‘following the water’ has led us to a place so cold that life as we know it couldn’t flourish. But it’s still interesting, and who knows what evolutionary paths extraterrestrial life might have taken?

Bottom line: Are there really subsurface polar lakes on Mars? Two new studies add to the debate – one pro and one con – about possible water beneath the Martian south polar ice cap.