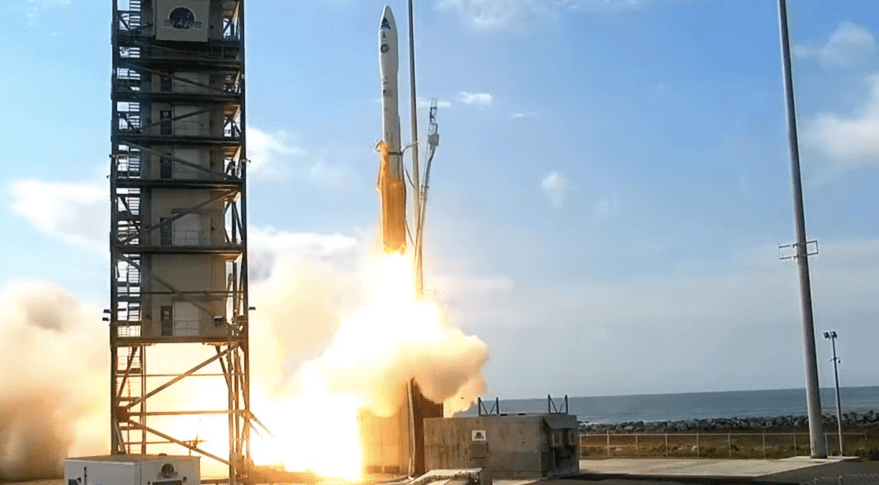 The mission named NROL-111 was delayed by more than two and a half hours because of weather. Approximately one minute after liftoff the first stage motor separated from the second stage motor.

The second stage separated about two minutes and 20 seconds after liftoff. Shorty after, NASA ended the webcast at the request of the NRO.

NROL-111 is a classified mission in low Earth orbit and the NRO did not disclose any details of the payloads. The logo shows a flying wild boar in aviator gear. The NRO said he three stars represent the mission’s three payloads developed by the agency.

The Minotaur 1 is a small rocket that can launch payloads up to 580 kilograms to low Earth orbit.

This was Minotaur 1’s first launch for the NRO, a U.S. intelligence agency that builds and operates the nation’s spy satellites.

The Minotaur 1 has completed 12 successful missions since it was introduced in 2000. NROL-111 was the NRO’s second launch of 2021 and the agency’s second mission launched from Wallops. Last year the NROL-129 mission launched on a Northrop Grumman Minotaur 4 rocket, a larger vehicle than the Minotaur 1.

Minotaur 1 has refurbished ICBM motors in its first and second stages. The third and and fourth stages are commercially produced motors that also are used in the company’s air-launched Pegasus XL rocket.