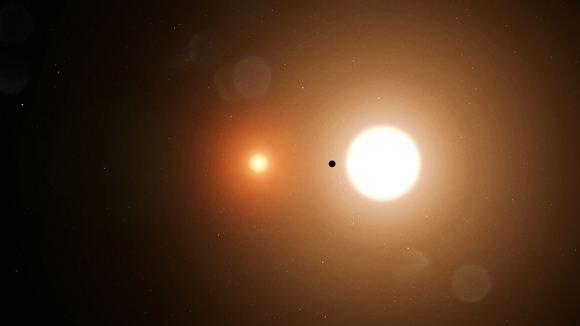 Our closest stellar neighbor is Proxima Centauri, an M-type (red dwarf) star located over 4.24 light-years away (part of the Alpha Centauri trinary system). In 2016, the astronomical community was astounded to learn that an Earth-like planet orbited within this star’s circumsolar habitable zone (HZ). In addition to being the closest exoplanet to Earth, Proxima b was also considered the most promising place to look for extraterrestrial life for a time.

Unfortunately, the scientific community has been divided on whether or not life could even be possible on this planet. All of these studies indicate that this question cannot be answered until astronomers characterize Proxima b’s atmosphere, ideally by observing it as it passes in front of (i.e., transits) its host star. But in a new NASA-supported study, a team led by astrophysicists at the University of Chicago determined that this is an unlikely possibility.

The study that describes their findings, which will appear soon in Frontiers in Astronomy and Space Sciences, was led by Emily A. Gilbert, a Graduate Student with the University of Chicago’s Department of Astronomy and Astrophysics. She was joined by researchers from The Adler Planetarium, the Center for Space Science and Technology (University of Maryland), and the Exoplanets and Stellar Astrophysics Laboratory at the NASA Goddard Space Flight Center.

The people responsible for the discovery were Guillem Anglada-Escudé and a team of astronomers from the Pale Red Dot campaign. Using the High Accuracy Radial velocity Planet Searcher (HARPS) spectrograph on the ESO 3.6-meter telescope at the ESO’s La Silla Observatory, the team confirmed the presence of Proxima b using a method known as Doppler spectroscopy (aka. the radial velocity method).

This method consists of observing the spectra of stars for signs of “wobble,” where the star is moving closer and farther away from Earth. This is caused by the gravitational influence of planets that orbit the star, the extent of which is used to infer the mass of the planets. In the case of Proxima b, astronomers obtained a minimum mass estimate of 1.24 and a maximum estimate of 2.06 Earth masses.

Its presence was confirmed again in 2020 using the ESO’s Very Large Telescope (VLT) and its Echelle SPectrograph for Rocky Exoplanet and Stable Spectroscopic Observations (ESPRESSO) instrument—the successors to the HARPS spectrograph. While most exoplanets to date have been detected using the transit method (aka. transit photometry), this was deemed impractical for a star like Proxima Centauri, which is a low-mass and less bright M-type (red dwarf) star.

But as Gilbert and her colleagues indicate in their study, this has not prevented numerous astronomical research teams from trying to detect planets transiting Proxima Centauri. For example. Prof. Kipping and his colleagues from the Cool Worlds Laboratory at Columbia University observed Proxima Centauri for 43.5 days between 2014 and 2015 using the Canadian Space Agency’s Microvariability and Oscillation of Stars (MOST) satellite.

In 2016, two research teams independently observed Proxima Centauri for signs of transits using the Las Campanas Observatory in Chile and the Bright Star Survey Telescope at the Zhongshan Station in Antarctica. Both surveys found evidence of possible transits but were unable to confirm them. In 2018–19, an international team released a two-part study regarding hundreds of observations made between 2006 and 2017 from observatories all across Earth. In both the original and the follow-up study, the authors indicated that no transits were observed.

For the sake of their study, Gilbert and her team relied on data collected by the Transiting Exoplanet Survey Satellite (TESS), the successor to the Kepler Space Telescope. Using a novel set of algorithms, the team examined two observation campaigns TESS made of Proxima Centauri—from April 23 to June 18, 2019, and from April 29 to May 26, 2021—for signs of Proxima b transiting.

They also included an algorithm that modeled Proxima Centauri’s stellar activity. It emits white light flares two to three times a day or more (some of which are very powerful). In fact, in a 2016 study co-authored by David Kipping, it was suggested that flares might so dominate Proxima Centauri that time-series observations of its light curve could be primarily thought of as a superposition of many flares. As Gilbert and her colleagues indicate in their study, this has always made looking for signals of planetary transits very difficult with Proxima Centauri:

“This level of activity can complicate the search for transiting exoplanets because of the additional noise in the data. A typical method of dealing with large flares is to identify them and remove them either by using flare detection algorithms or simple sigma-clipping.

“Here, we take a different approach, we identify the flares using a custom algorithm, model the flares using a template, subtract these flares from the data, and then perform the transit search. We then inject transits into the light curve to test our sensitivity to transiting planets.”

One might ask the question, why do astronomers persist in looking for transits? The answer is simple: If Proxima b were to transit in front of its sun, astronomers could obtain transmission spectroscopy from the light passing through its atmosphere. This would allow them to discern the presence of chemical signatures and constrain the planet’s atmospheric composition, including potential biomarkers.

The team used two planet search algorithms to detect planetary transit signals in the TESS data as a next step. First, they used the Transit Least Squares (TLS) developed by Michael Hippke and René Heller (Sonneberg Observatory and Max Planck Institute for Solar System Research, respectively). Second, they employed the Quasiperiodic Automated Transit Search (QATS) by Hubble Fellow Joshua A. Carter and Eric Agol—of the Harvard Smithsonian Center for Astrophysics (CfA) and the University of Washington.

However, Gilbert and her team still found no evidence of transits in the data. To be sure, they injected synthetic transiting planet signals into the TESS data to determine what circumstances a transiting planet could be detected. From this, they determined that exoplanets orbiting with Proxima Centauri’s HZ would have to measure less than 0.4 to 0.5 Earth radii (similar to Mars) to be detectable. This rules out Proxima b, which measures between 0.68 and 2.5 Earth radii.

This is disappointing news for exoplanet researchers, as it confirms that the only way we can characterize Proxima b is to send an actual mission there. In this respect, projects such as Breakthrough Starshot and other “light sail” concepts would need to happen before scientists could determine if our closest exoplanet neighbor is suitable for life. However, it may also be possible to directly image Proxima b in the near future using next-generation telescopes.

This includes the James Webb Space Telescope, which is scheduled to launch on Dec. 18th, and the Nancy Grace Roman Space Telescope, which will follow in 2027. Ground-based observatories like the ESO’s Extremely Large Telescope (ELT) and the Carnegie Institute of Science’s Giant Magellan Telescope (GMT) will also be able to conduct direct imaging studies using their large mirrors, spectrographs, coronographs, and adaptive optics.

These and other observatories will also benefit from next-generation machine learning techniques (like the one developed by Gilbert and her colleagues). Accounting for the level of stellar activity will allow astronomers to tease exoplanet signatures from all the background noise with greater precision. As they conclude in their study:

“With the ongoing TESS mission as well as planned missions like Plato providing long baseline, high-precision observations, this technique may be extremely valuable for detecting small planets orbiting active host stars. There are many low-mass active nearby stars, and the methods we have presented here are could significantly improve our sensitivity to small planets transiting these stars.”

With these tools, instruments, and observatories at their disposal, astronomers expect to greatly expand the exoplanet catalog (4,569 confirmed and counting) in the coming years, as well as speed the transition to exoplanet characterization. At that point, some of the most pressing questions (such as, “are we alone in the universe?”) will finally be answered.