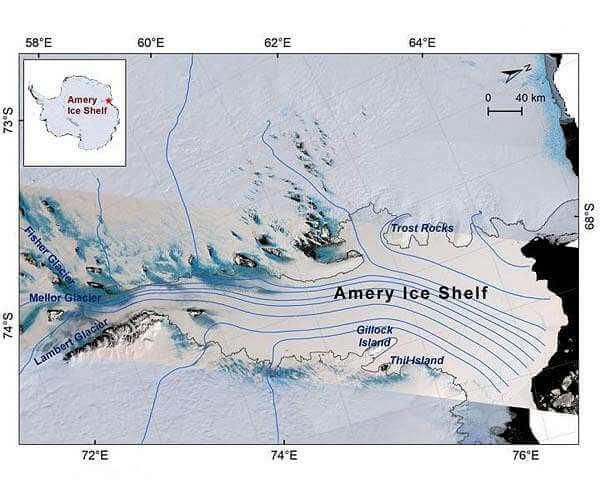 When a block of ice the size of Houston, Texas, broke off from East Antarctica’s Amery Ice Shelf in 2019, scientists had anticipated the calving event, but not exactly where it would happen. Now, satellite data can help scientists measure the depth and shape of ice shelf fractures to better predict when and where calving events will occur, according to researchers.

Ice shelves make up nearly 75% of Antarctica’s coastline and buttress – or hold back – the larger glaciers on land, said Shujie Wang, assistant professor of geography at Penn State. If the ice shelves were to collapse and Antarctica’s glaciers fell or melted into the ocean, sea levels would rise by up to 200 feet.

“When we try to predict the future contribution of Antarctica to sea-level rise, the biggest uncertainty is ice shelf stability,” said Wang, who also holds an appointment in the Earth and Environmental Systems Institute. “There’s no easy way to map the depth of fractures in the field over a regional scale. We found that satellite data can capture the depth and surface morphology of ice shelf fractures and thereby allow us to consistently monitor this information over a large range.”

Wang and her colleagues examined high-resolution data collected by the Ice, Cloud and Land Elevation Satellite (ICESat-2) over the Amery Ice Shelf, which is about the size of West Virginia, between October 2018 and November 2019. The satellite shoots green laser pulses to the land surface and uses reflected photons to determine surface height. Whereas other satellites have a resolution of several thousands of feet, ICESat-2 has a resolution of approximately 56 feet, enabling it to see smaller fractures and the fracture morphology.

The researchers then ran the ICESat-2 data through an algorithm that identifies surface depression features to locate and characterize fractures in the ice. They reported their results in the journal Remote Sensing of Environment.

The researchers identified three types of fractures – U-shaped, parabolic-shaped and V-shaped fractures – up to 164 feet deep in the ice shelf. They also realized that this surface information provides insights into what is happening hundreds of feet below the surface of the ice.

Basal fracture morphology – the shape and size of fractures at the base of the ice shelf – is proportional to the surface depressions, according to Wang. As the glacier that the ice sheet is buttressing accumulates more snow and ice, the parabolic-shaped fractures flow toward the edges of the ice shelf.

Once they cross a certain boundary, those surface fractures have a greater potential to penetrate deeper into the ice as the basal fractures extend upward. These fractures can then become V-shaped, potentially signaling that a rift – a fracture that penetrates the entire thickness of the ice sheet – has formed. These rifts are more likely to cause calving events.

“Incorporating satellite-based vertical information can improve future ice shelf models,” Wang said. “It can help us actually predict calving fronts and where an ice shelf is vulnerable to these events.”