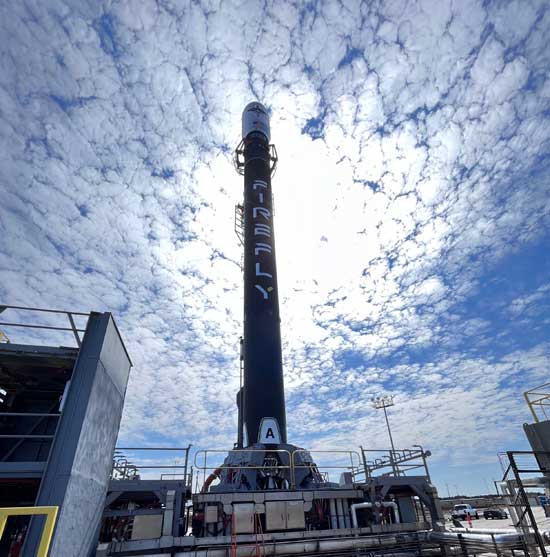 CEDAR PARK, Texas (Firefly Space PR) — Firefly Space Transport Services (STS), a wholly-owned subsidiary of Firefly Aerospace, Inc, announced today that the company has been selected by the National Aeronautics and Space Administration (NASA) to provide launch services for the agency’s Venture-Class Acquisition of Dedicated and Rideshare (VADR) missions in the 500-1000 kg grouping utilizing its Alpha rocket. The fixed-price indefinite-delivery/indefinite-quantity contract has a five-year ordering period with a maximum total value of $300 million across all contracts.

“This award is a pivotal step for Firefly to continue to work with NASA and build upon our existing VCLS and CLPS contracts and our partnership with Northrop Grumman to send cargo to the ISS,” said Firefly Aerospace’s CEO, Bill Weber.

Launch vehicle capabilities for the VADR contract are divided into three categories: below 500 kg, 500-1000 kg, and above 1000 kg, with a specification that there be multiple providers for each category. NASA/KSC (Kennedy Space Center) determined that there was only one provider for the 500-1000kg category currently on the VADR contract and posted an intent to enter sole source negotiation with Firefly to fulfill the multiple provider need. Further, NASA noted that Firefly is the only launch vehicle provider in this grouping that has completed development and conducted its first test launch.

“Firefly has had a long-standing relationship with NASA and is committed to providing NASA and other U.S. government entities with responsive, repeatable, reliable space transportation services,” stated Jason Mello, President, Firefly STS, LLC. “We are honored to be included in this award and to be one of two vehicles in this class to meet the NASA’s Launch Services Program demand for assured access to space.”

The VADR contract will provide a broad range of Federal Aviation Administration-licensed commercial launch services capable of delivering payloads ranging from CubeSats to Class D missions to a variety of orbits. These small satellites and Class D payloads tolerate relatively high risk and serve as an ideal platform for technical and architecture innovation, contributing to NASA’s science research and technology development.

Firefly’s Alpha Flight 2 mission is currently scheduled to launch from Vandenberg Space Force Base on September 19th. Firefly’s VADR award builds on their previous $9.8M award of the VCLS Demo 2, which is currently being prepared for integration and will be flown on their upcoming Alpha Flight 3 mission planned for later this year.

Firefly is developing a family of launch and in-space vehicles and services that provide industry-leading affordability, convenience, and reliability. Firefly’s launch vehicles utilize common technologies, manufacturing infrastructure and launch capabilities, providing LEO launch solutions for up to ten metric tons of payload at the lowest cost per kg in the small-launch class. Combined with Firefly’s in-space vehicles, such as the Space Utility Vehicle and Blue Ghost Lunar Lander, Firefly provides the space industry with a single source for missions from LEO to the surface of the Moon or beyond. Firefly is headquartered in Cedar Park, TX. For more information please see: www.fireflyspace.com.