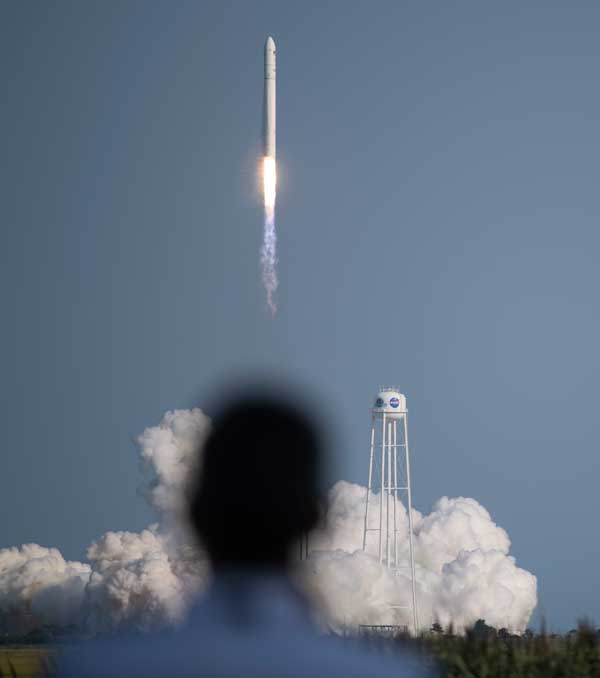 WALLOPS, Va. (NASA PR) — A Northrop Grumman Cygnus resupply spacecraft is on its way to the International Space Station with more than 8,200 pounds of science investigations and cargo after launching at 6:01 p.m. EDT Tuesday from NASA’s Wallops Flight Facility in Virginia. At 8:46 p.m., the spacecraft’s solar arrays successfully deployed to collect sunlight to power Cygnus on its journey to the station.

Cygnus is scheduled to arrive at the space station around 6:10 a.m. Thursday, Aug. 12. NASA Television, the NASA app, and agency’s website will provide live coverage of the spacecraft’s approach and arrival beginning at 4:45 a.m.

NASA astronaut Megan McArthur will use the space station’s robotic Canadarm2 to capture Cygnus upon its arrival, while ESA (European Space Agency) astronaut Thomas Pesquet monitors telemetry during rendezvous, capture, and installation on the Earth-facing port of the Unity module.

This is Northrop Grumman’s 16th cargo flight to the space station and is the fifth under its Commercial Resupply Services 2 contract with NASA. Cygnus launched on an Antares 230+ rocket from the Virginia Mid-Atlantic Regional Spaceport’s Pad 0A at Wallops.

The resupply flight will support dozens of new and existing investigations. Included in the scientific investigations Cygnus is delivering to the space station are:

From dust to dwelling
Using resources available on the Moon and Mars to build structures and habitats could reduce how much material future explorers need to bring from Earth, significantly reducing launch mass and cost. The Redwire Regolith Print (RRP) study demonstrates 3D printing on the space station using a material simulating regolith, or loose rock and soil, found on the surfaces of planetary bodies such as the Moon. Results could help determine the feasibility of using regolith as the raw material and 3D printing as a technique for on-demand construction of habitats and other structures on future space exploration missions.

Maintaining muscles
As people age and become more sedentary on Earth, they gradually lose muscle mass, a condition called sarcopenia. Identifying drugs to treat this condition is difficult because it develops over decades. Cardinal Muscle tests whether microgravity can be used as a research tool for understanding and preventing sarcopenia. The study, funded by the National Science Foundation in collaboration with the ISS U.S. National Laboratory, seeks to determine whether an engineered tissue platform in microgravity forms the characteristic muscle tubes found in muscle tissue. Such a platform could provide a way to rapidly assess potential drugs prior to clinical trials.

Taking the heat out of space travel
Longer space missions will need to generate more power, producing more heat that must be dissipated. Transitioning from current single-phase heat transfer systems to two-phase thermal management systems reduces size and weight of the system and provides more efficient heat removal. Because greater heat energy is exchanged through vaporization and condensation, a two-phase system can remove more heat for the same amount of weight than current single-phase systems. The Flow Boiling and Condensation Experiment (FBCE) aims to develop a facility for collecting data about two-phase flow and heat transfer in microgravity. Comparisons of data from microgravity and Earth’s gravity are needed to validate numerical simulation tools for designing thermal management systems.

Cooler re-entries
The Kentucky Re-Entry Probe Experiment (KREPE) demonstrates an affordable thermal protection system (TPS) to protect spacecraft and their contents during re-entry into Earth’s atmosphere. Making these systems efficient remains one of space exploration’s biggest challenges, but the unique environment of atmospheric entry makes it difficult to accurately replicate conditions in ground simulations. TPS designers rely on numerical models that often lack flight validation. This investigation serves as an inexpensive way to compare these models to actual flight data and validate possible designs. Before flying the technology on the space station, researchers conducted a high-altitude balloon test to validate performance of the electronics and communications.

Getting the carbon dioxide out
Four Bed CO2 Scrubber demonstrates a technology to remove carbon dioxide from a spacecraft. Based on the current system and lessons learned from its nearly 20 years of operation, the Four Bed CO2 Scrubber includes mechanical upgrades and an improved, longer-lasting absorbent material that reduces erosion and dust formation. Absorption beds remove water vapor and carbon dioxide from the atmosphere, returning water vapor to the cabin and venting carbon dioxide overboard or diverting it to a system that uses it to produce water. This technology could improve the reliability and performance of carbon dioxide removal systems in future spacecraft, helping to maintain the health of crews and ensure mission success. It has potential applications on Earth in closed environments that require carbon dioxide removal to protect workers and equipment.

Mold in microgravity
An ESA investigation, Blob, allows students aged 10 to 18 to study a naturally-occurring slime mold, Physarum polycephalum, that is capable of basic forms of learning and adaptation. Although it is just one cell and lacks a brain, Blob can move, feed, organize itself, and even transmit knowledge to other slime molds. Students replicate experiments conducted by ESA astronaut Thomas Pesquet to see how the Blob’s behavior is affected by microgravity. Using time-lapse video from space, students can compare the speed, shape, and growth of the slime molds in space and on the ground. The French space agency Centre National d’Etudes Spatiales and the French National Center for Scientific Research coordinate Blob.

These are just a few of the hundreds of investigations currently being conducted aboard the orbiting laboratory in the areas of biology and biotechnology, physical sciences, and Earth and space science. Advances in these areas will help keep astronauts healthy during long-duration space travel and demonstrate technologies for future human and robotic exploration missions as part of NASA’s Moon and Mars exploration approach, including lunar missions through NASA’s Artemis program.

Cygnus also will deliver a new mounting bracket that astronauts will attach to the port side of the station’s backbone truss during a spacewalk planned for late August. The mounting bracket will enable the installation of one of the next pair of new solar arrays at a later date.

The Cygnus spacecraft will remain at the space station until November before it disposes of several thousand pounds of trash through its destructive re-entry into Earth’s atmosphere.