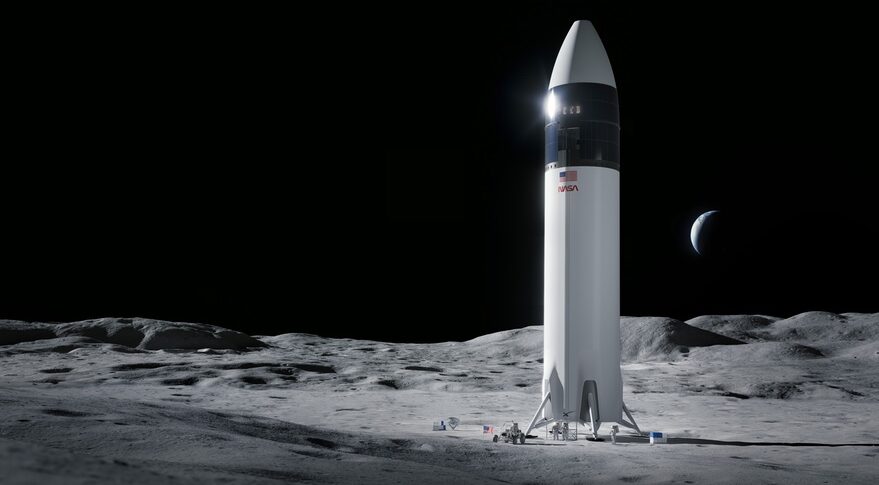 WASHINGTON — After landing astronauts on the moon in the mid-2020s for the first time in more than a half-century, NASA will wait at least two more years before making a second crewed lunar landing as part of the Artemis program.

In presentations at a two-day meeting of the NASA Advisory Council’s Human Exploration and Operations Committee Jan. 18 and 19, agency officials said the Artemis 4 mission, the first after the Artemis 3 mission lands astronauts on the moon, will not attempt a landing itself.

Instead, Artemis 4 will be devoted to assembly of the lunar Gateway. The mission will deliver the I-Hab habitat module, developed by the European Space Agency and the Japanese space agency JAXA, to the Gateway. It will be docked with the first Gateway elements, the Power and Propulsion Element and Habitation and Logistics Outpost, which will launch together on a Falcon Heavy in late 2024 and spend a year spiraling out to the near-rectilinear halo orbit around the moon.

Artemis 4 will also be the first flight of the Block 1B version of the Space Launch System, which replaces the Interim Cryogenic Propulsion Stage used on the first three SLS launches with the more powerful Exploration Upper Stage. That enables Artemis missions to carry “co-manifested” payloads along with the Orion spacecraft, such as the I-Hab module.

That will be a big challenge for the mission even without a lunar landing. “When you balance the performance constraints against the launch opportunities and get everything to line up, we find that we’re awfully challenged,” said Mark Kirasich, deputy associate administrator and head of NASA’s Advanced Exploration Systems division, during a presentation at the meeting Jan. 19.

One issue with the mission is the mass of the I-Hab. Kirasich said co-manifested payloads on the SLS Block 1B have a maximum mass of 10 metric tons, and he suggested I-Hab was struggling to get under that limit. He said Dan Hartman, NASA’s Gateway program manager, “is working with ESA, day in and day out, to get their mass to meet the limit.”

Another reason for not including a landing on Artemis 4 is availability of a lunar lander. NASA’s Human Landing System (HLS) Option A award to SpaceX last year covers only development of a lander and a single crewed flight on Artemis 3. NASA will acquire future landings through a separate effort, called Lunar Exploration Transportation Services (LETS). The goal of LETS is to select one, and possibly more, companies to provide “sustainable” landing services.

The timing of LETS — a draft request for proposals is scheduled for release this spring — means there will be a gap of a couple years before the first landing service acquired through that program would be ready. “It’ll be about two years from the Option A award to the LETS award before we’ll have this sustainable lander,” Kirasich said. “It’s a different lander with more aggressive requirements than Option A.”

That would make Artemis 5 the first Artemis mission to both use the Gateway and have a lunar landing. That mission, according to a “working manifest” chart presented at the meeting, will also include delivery of ESA’s ESPRIT refueling and communications module and a Canadian-built robotic arm system for the Gateway as well as an unpressurized lunar rover.

That manifest did not include dates for either Artemis 4 or 5, with Artemis 3 scheduled for mid-2025. However, NASA has previously discussed its intent to fly one SLS/Orion mission a year, which would mean Artemis 5 would fly no earlier than 2027.

“We’ve got a lot of work to do to make Artemis 3, 4 and 5 work with the manifest we have today,” Kirasich said. Later in the meeting, he said he couldn’t rule out including a landing on Artemis 4, but that it would require major changes to the overall Artemis schedule.

“We have a list of alternate missions should one of the elements get ahead or behind of the others,” he said. “Something else would have to change for us to have a lander in the Artemis 4 time frame.”

That schedule will also depend on the progress NASA makes on the initial Artemis missions, starting with Artemis 1. That uncrewed test flight of SLS and Orion does not have a formal launch date, but Jim Free, NASA associate administrator for exploration systems development, told the committee Jan. 18 was looking at March or April for the launch.

“We could probably get a launch attempt with about six or seven days left” in the March window, which closes March 27. “Our next launch period opens April 8.”

Rollout of the SLS for a wet dress rehearsal, a fueling test and practice countdown at Launch Complex 39B, is scheduled for around Feb. 15, which would allow the test itself to take place by the end of February, said Amit Kshatriya, assistant deputy associate administrator for Exploration Systems Development at NASA, at the committee meeting Jan. 19.

Kirasich said that, after a protest and lawsuit delayed the start of NASA’s work with SpaceX on the HLS Option A award, the agency is now “fully engaged” with the company on development of the Starship lunar lander system. “SpaceX did make progress” during that hiatus, he said, including completing five milestones, such as tests of the Raptor engine. NASA reviewed that work and “paid all five of those milestones.”