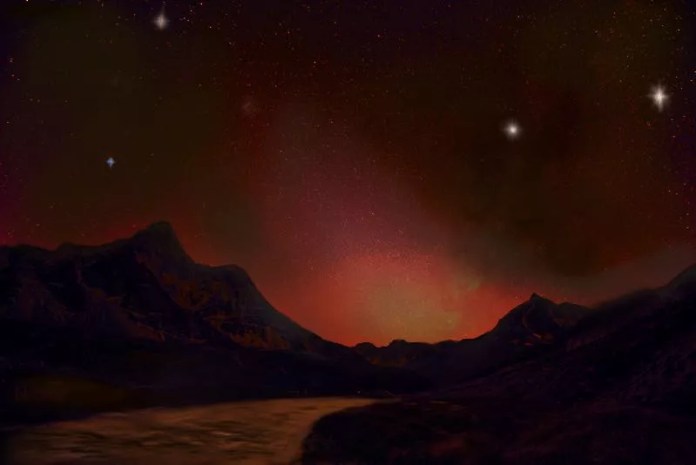 The display may be a clue to understanding other planetary systems.

Watch the sun set from a particularly dark patch of Earth and you may spot a triangle of what scientists call zodiacal light extending from where our star passed below the horizon.

Zodiacal light in Earth’s skies is created when sunlight bounces off the dust that fills the solar system, the remains of pulverized asteroids and flurry left by passing comets. And according to new research by a team of astronomers and high school students based in China, a similar phenomenon occurs in the skies of at least a few potentially habitable exoplanets. The light could be one more clue for scientists seeking to puzzle out what those exotic neighborhoods might look like.

“If we can detect zodiacal light from a distant planet system, then this system likely has components like asteroids and comets, which can’t be easily detected directly in other ways,” lead author Jian Ge, an astronomer at Shanghai Astronomical Observatory in China, said during a news conference held virtually on Jan. 13 by the American Astronomical Society. Ge had been scheduled to present the research at a meeting organized by the group that was canceled due to COVID-19.

Ge and his colleagues — including a team of high school students — evaluated 47 different potentially habitable worlds studied by NASA’s Kepler space telescope, which ended operations in 2018. For each planet, the team gathered a host of data, from sources including the European Space Agency’s Gaia mission, NASA’s Wide-field Infrared Survey Explorer (WISE) and Spitzer Space Telescope and more.

These data helped the researchers determine which planetary systems were brighter in infrared light — wavelengths we feel as heat — than they might have expected. Next, the team checked whether other factors, such as background stars, might be to blame. The process left three planets where the researchers say zodiacal light may shine: Kepler-69c, Kepler-1229b and Kepler-395c, all of which are classified as “super Earths.”

Exactly what skywatchers would see at the surface of these alien worlds likely varies from planet to planet, Ge noted during the news conference.

“You can imagine the zodiacal light may look very red,” he said of Kepler-1229b, which orbits a red dwarf star.

Kepler-69c, meanwhile, may be a “super Venus” world, larger than our next-door neighbor but equally inhospitable. “We can imagine that this planet’s atmosphere and surface look like those of our Venus,” Ge said. “It may have a runaway greenhouse effect on its surface, and the atmosphere may be thick and hot, while the surface would be extremely dry.” (A thick atmosphere would likely make the zodiacal light more difficult to see.)RELATED STORIES:

Right now, with only three candidates among 47 planets, the researchers can’t say that zodiacal light is a particularly common sight on potentially habitable worlds, but that may change when astronomers can use more powerful observations than those of NASA’s WISE mission, Ge said.

“When the sensitivity improves, we may see more systems that have weaker dust emissions,” Ge said.